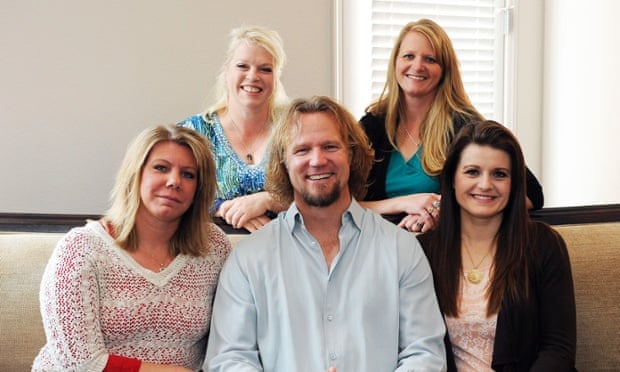 Kody Brown and his “sister wives”

It didn’t take long. Within weeks of the US Supreme Court decision to legalise same-sex marriage, polygamous families have sued to have their own relationships recognised as marriages.

Kody Brown and his four wives are the stars of Sister Wives, the reality TV show about the day-to-day life of a polygamous family. The Browns used to live in Utah, where the government prosecutes openly polygamous spouses, so they have moved over the border. Nevada has a more relaxed approach to these issues.

The Browns are on a roll. In December 2013 they won a legal victory when a Federal district court overturned parts of a Utah statue banning polygamous marriages. But the Utah Attorney-General has appealed. He claims that women and children in polygamous relationships are often abused and that courts have consistently reprehended polygamy.

Jonathan Turley, the attorney who has taken up the Browns’ case, has filed a brief with the US 10th Circuit Court of Appeals disputing this. Its fundamental argument is that the parade of cases which culminated in Obergefell v. Hodges make it clear that the state has no business regulating intimate adult relationships.

“The very notion of a state today criminalizing the right of consenting adults to maintain certain private relationships is a regression to a prior century of state-enforced morality codes. Not surprisingly, the government relies on cases like Reynolds v. United States, 98 U.S. 145 (1878), which has been widely condemned for its openly prejudiced and ill-tempered rhetoric against social, racial, and religious minorities.

“Modern cases have consistently rejected the criminalization of private relationships, see Lawrence v. Texas, 539 U.S. 558 (2003), as well as rejected barriers based on moral and social bias, see United States v. Windsor, 133 S. Ct. 2675 (2013) and Obergefell v. Hodges, 135 S. Ct. 2584 (2015). By only striking the cohabitation provision, the District Court left Utah with the same law maintained by most states in the Union prohibiting bigamy.

“What was lost to the state is precisely what is denied to all states: the right to impose criminal morality codes on citizens, compelling them to live their lives in accordance with the religious or social values of the majority of citizens …

“From the rejection of morality legislation in Lawrence to the expansion of the protections of liberty interests in Obergefell, it is clear that states can no longer use criminal codes to coerce or punish those who choose to live in consensual but unpopular unions. This case is about criminalization of consensual relations and there are 21st century cases rather than 19th century cases that control.

The Kodys are not the only polygamists who have sought protection in the courts after Obergefell. Another Sister Wives family, Nathan Collier and his two “wives”, Victoria and Christine, have sued in Montana to have their marriage recognised. “[D]isparate treatment of plural families denies them basic liberties, due process, and equal protection under the law as guaranteed by the First and Fourteenth Amendments of the United States Constitution,” they say.

And, as gay and lesbian couples have been arguing, the trio claims that restricting a relationship to to two persons is discriminatory and insults the authenticity of their love.

Gay couples do not generally support polygamous unions. But the logic is the same, as Chief Justice Roberts recognised in his dissent in Obergefell:

It is striking how much of the majority’s reasoning would apply with equal force to the claim of a fundamental right to plural marriage. If “[t]here is dignity in the bond between two men or two women who seek to marry and in their autonomy to make such profound choices,” why would there be any less dignity in the bond between three people who, in exercising their autonomy, seek to make the profound choice to marry? If a same-sex couple has the constitutional right to marry because their children would otherwise “suffer the stigma of knowing their families are somehow lesser,” why wouldn’t the same reasoning apply to a family of three or more persons raising children? If not having the opportunity to marry “serves to disrespect and subordinate” gay and lesbian couples, why wouldn’t the same “imposition of this disability,” serve to disrespect and subordinate people who find fulfillment in polyamorous relationships?

There is little danger of polygamy being legalised tomorrow, or the day after tomorrow, or even next year. But if Kody Brown and his family and friends (and Muslim unions) stick it out, they may live to see their love acknowledged, too. Stay tuned for further developments.