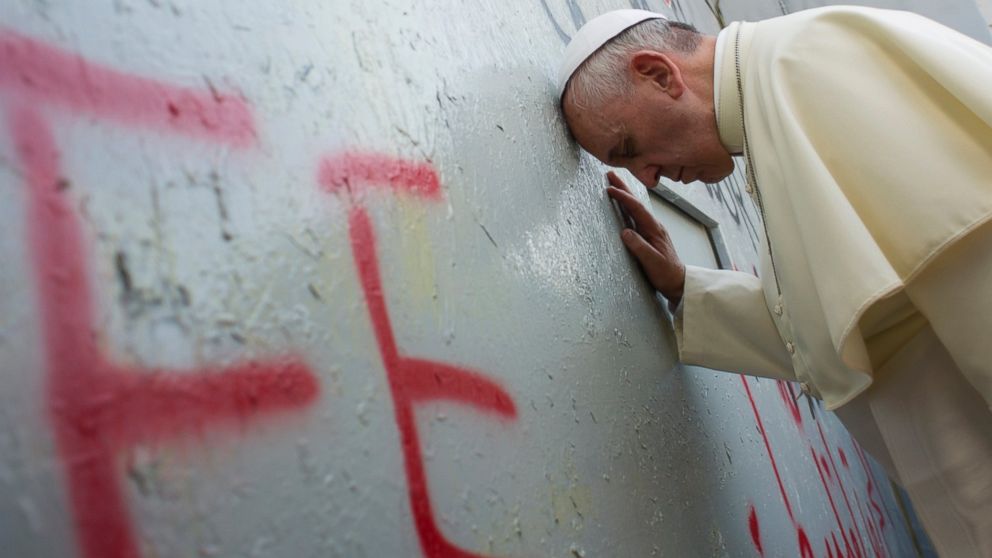 On this journey, Pope Francis took two notable friends from Argentina: Rabbi Abraham Skorka and Sheikh Omar Abboud. What did that mean, and what did it accomplish?

It made for a grabbing lead in a CNN article leading up to the pope’s Holy Land journey.

So, a rabbi, a sheikh and a pope travel to the Holy Land…

It might sound like the start of a trite joke, but it’s actually the entourage for one of the most highly anticipated papal trips in recent history.

It was a short one, not even three full days, but packed with an astounding itinerary, starting in Jordan and then flying over the enormous divide between Bethlehem and Jerusalem though not without stopping at the huge, ominous, ugly concrete security wall separating those two cities and Israel from Palestine at that key border crossing, one of the most prominently published photos of the apostolic journey to the Holy Land.

Theology experts have called Francis “the pope of the grand gesture”, and Rocco Palmo picks up on that identity in this coverage.

Fourteen months into the new Rule of Francis, it’s well beyond clear that this pontificate’s most resonant moments of communication come without words…while en route to the late-morning Mass at Bethlehem’s Manger Square, the Pope suddenly halted his motorcade, stepped off the Jeep, and caused a chaotic moment as he waded through a crowd to stop and pray for several minutes at the barrier separating Israel and Palestine as an advocate for the new state blared its people’s case over loudspeakers in English.

“In this place where the Prince of Peace was born,” Francis said, “I desire to invite you, [Palestinian] President Mahmoud Abbas, and [the Israeli] President Shimon Peres, to raise together with me an intense prayer to God for the gift of peace. And I offer my house in the Vatican to host you in this encounter of prayer.”

This was unplanned, as much of what Francis does, is. It suddenly became news. Generated headlines immediately.

That impromptu moment by Francis continued:

“All of us want peace. Many people build it day by day through small gestures and acts; many of them are suffering, yet patiently persevere in their efforts to be peacemakers. All of us – especially those placed at the service of their respective peoples – have the duty to become instruments and artisans of peace, especially by our prayers. Building peace is difficult, but living without peace is a constant torment. The men and women of these lands, and of the entire world, all of them, ask us to bring before God their fervent hopes for peace.”

He continued that pursuit in a meeting in Bethlehem with Palestinian leaders.

“The time has come for everyone to find the courage to be generous and creative in the service of the common good, the courage to forge a peace which rests on the acknowledgment by all of the right of two States to exist and to live in peace and security within internationally recognized borders,” he stressed.

That same message has been delivered time and again by his predecessor and world leaders, and such a peace remains as elusive as ever. But Francis was undaunted.

The Pontiff also spoke forcefully in defense of Christians living in the Holy Land, who “desire to continue in this role as full citizens”

Calling upon the “good relations existing between the Holy See and the State of Palestine,” Pope Francis expressed his hope that “it is possible to find a means of serene, ordered and peaceful coexistence, accepting our differences and rejoicing that, as children of the one God, we are all brothers and sisters.”

Religious freedom is a “fundamental right,” he emphasized. It is “one of the essential conditions for peace, fraternity, and harmony.”

Wherever he went and wherever he goes, that emphasis on religious freedom is key for him, as it was for John Paul II and Benedict XVI.

The Pope expressed his “closeness to those who suffer” in the “climate of instability” in the region.

He noted that a “lack of mutual understanding” has produced “insecurity, the violation of rights, isolation, and the flight of entire communities.”

Pope Francis then said, “I wish to state my heartfelt conviction that the time has come to put an end to this situation which has become increasingly unacceptable.”

The Pontiff was firm in his emphasis that peace must be sought.

This is pure Francis.

“There is a need to intensify efforts and initiatives aimed at creating the conditions for a stable peace based on justice, on the recognition of the rights of every individual, and on mutual security.”

He insisted that the conflicts in the region must end, “even if each side has to make certain sacrifices.”

It’s going to take a heroic effort to bring that about. He’s working on it.

In the run-up to this PopeTrip, Rabbi Abraham Skorka often anticipated the moment when “The Pope and I will embrace at the Wailing Wall.”

And finally…with Francis’ Argentine Muslim friend Omar Abboud in tow – the scene came to pass, followed by this visit’s most evocative talk to date: Papa Bergoglio’s harrowing reflection on the Holocaust at Jerusalem’s Yad Vashem memorial to the 6 million Jews exterminated by the Nazis, which began with a long, shaken pause.

He touched everyone in their deepest hurts and longings.

And the biggest takeaway of an emotionally packed Holy Land journey, where he met with refugees desperate not to be forgotten, and with leaders of deeply and historically divided lands and peoples, was that he spontaneously asked them to come to ‘his home’ to meet and talk more, in that neutral setting away from their homelands and in a friendly environment.

Pope Francis’ invitation to the presidents of Israel and the Palestinian Authority to join him in a peace prayer in the Vatican is consistent with what former Vatican ambassador Raymond L. Flynn said is the new pontiff’s peace strategy of putting the Middle East leaders on the spot.

“I think he’s going to be successful in uniting world religious leaders, and now the real challenge ahead is whether or not he’s going to be able to almost embarrass these political leaders to take a stand,” said Flynn, also former mayor of Boston.

The pope yesterday turned what had been billed as a religious pilgrimage to the West Bank and Israel into an effort to renew the stalled peace process, inviting Israeli President Shimon Peres, whose position largely is ceremonial, and Palestinian ?Authority President Mahmoud Abbas, to the Vatican “to join me in heartfelt prayer to God for the gift of peace.”

The invitation was welcomed by both sides, though the proposed meeting was widely seen as symbolic.

“I implore those in positions of responsibility to leave no stone unturned in the search for equit­able solutions to complex problems, so that Israelis and Palestinians may live in peace,” the pope said.

“The path of dialogue, reconciliation and peace must constantly be taken up anew, courageously and tirelessly. There is simply no other way,” he said.

Knowing and watching and covering Francis, you know this carries weight. We have come to accept endless efforts and equally endless resignation on this process. But among the clerics who traveled to the Middle East with him, noted CNN, all eyes of the world would be on the man in white.

And this is a good time to recall that popes choose their name for a particular reason, to signal what will be the central, identifying theme of their pontificates. Francis was the saint of the poor, the one who received the vision and message to “rebuild my Church”.

And as much as anything else, Francis of Assisi was known by people worldwide who aren’t even Catholic or Christian or believers at all, as a peacemaker. This Francis is determined to carry on all the missions of his namesake. The meeting in Rome, at the Vatican, of Israeli President Shimon Peres and Palestinian President Mahmoud Abbas together with Pope Francis, will take place in June. Most media are calling it ‘symbolic.’

Sheila Liaugminas is an Emmy award-winning Chicago-based journalist in print and broadcast media.