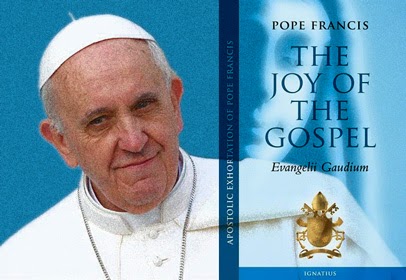 Though he didn’t say exactly that, he said that in so many words.

Pope Francis has been provoking and jabbing people on all sides of the political and ideological spectrum since he was elected to fill the Chair of Peter. Pope John Paul II and Pope Benedict XVI dedicated their pontificates to implementing the rich teachings of the Second Vatican Council. Pope Francis comes along and says, more or less, ‘okay, let’s do this.’ He seems to have his sleeves perpetually rolled up (in a manner of speaking), and his worn shoe leather hitting the ground to reach everyone who comes across his path. In fact, he goes seeking the ones who aren’t on his path, as he did in Rio during World Youth Day week when he instructed his motorcade to stop abruptly so he could jump out and go visit a family living in a house he passed along the way. He must be driving his security detail nuts, but they’re surely getting more used to this pope by now.

After all, he even slips out at night to go into the run down parts of the city of Rome to give alms, evidently.

He has the world’s attention. That’s one thing. But are they hearing him?

I’d love to delve deeper into Evangelii Gaudium, ‘The Joy of the Gospel’, and will. But preparing to leave town on an event with the mission to reach people who want to hear the joy of the Gospel (and God help me if I don’t bring it, in a joyful demeanor a la Francis), there’s no time right now to give those outstanding words and paragraphs the time they deserve right now. In due time…

Suddenly, Catholics in high places who want to get it right and are trying to stay up with this Pope are putting out thought provoking posts like this.

What’s Pope Francis up to? Reminding people of roots and past, urging us forward with a greater awareness of the Trinitarian dimensions of our lives. What’s Archbishop Gomez up to in his Immigration and the Next America? Ditto. Archbishop Chaput in just about every syllable. Something similar. You get the idea. We have a talented and wise bench of American bishops and rising cardinals. They challenge and lead. (Thinking of Bishop Olmsted of Phoenix and so many others.)

If lay Catholics take the lead in the political, really grappling with what Catholic Social Teaching should look like in policy practice in an ecumenical civil context, our pastors will have more time for the pastoral. And we’ll [have] more of a prayer of Catholics who vote and serve with Catholic teaching in mind, discerning their contribution in prayer, infused by the graces of the Sacraments and sanctified living.

In the early going, the ever instructive Jimmy Akin lists his ‘what you need to know’ points about this papal document. I particularly liked point no. 7:

7) What particularly noteworthy things does the pope have to say in the document?

There is a mountain of them.

He’s certainly right on that.

The document is 51,000 words long, which means that it is the length of a novel and takes at least 5 hours to read.

There are numerous important things that the pope says, some of which I will endeavor to unpack in future blog posts.

However, Archbishop Fisichella offers a summary of seven main themes that it covers:

The following seven points, gathered together in the five chapters of the Exhortation, constitute the fundamental pillars of Pope Francis’ vision of the new evangelization:

1. the reform of the Church in a missionary key,

2. the temptations of pastoral agents,

3. the Church understood as the totality of the People of God which evangelizes,

4. the homily and its preparation,

5. the social inclusion of the poor,

7. and the spiritual motivations for the Church’s missionary action.

The cement which binds these themes together is concentrated in the merciful love of God which goes forth to meet every person in order to manifest the heart of his revelation: The life of every person acquires meaning in the encounter with Jesus Christ and in the joy of sharing this experience of love with others.

Sound too ‘churchy’ for you? This pope doesn’t do ‘churchy’ in ways modern culture is used to, or used to ridiculing.

Media are still seeing the document as an excoriation of capitalism. Not exactly, though once again, he jabs everyone. This piece has a good lead.

Nothing worries Catholics more than the reporting of statements made by Pope Francis.

The reaction across the political spectrum suggested that Pope Francis was breaking with the supposedly ultra-conservative Pope Benedict XVI on emphasis if not entirely on teaching, while others accused Francis of betraying the Cold War legacy of soon-to-be-canonized John Paul II by embracing socialism rather than the free-market economics that liberated Poland and Eastern Europe.

However, a thorough reading of Evangelii Gaudium in the context of the Catechism promulgated by John Paul II fails to substantiate these accusations or celebrations. It’s true that Francis has scalding criticisms of dysfunctional capitalism as an end in itself. One has to consider that in the context of his front-row seat for the Argentinian version of it, where crony capitalism creates a huge distortion in the distribution of goods and the winners corrupt government to perpetuate those outcomes. Argentina hardly holds a monopoly on that development, though, and where gaps of inequality and poverty in these economies grow, criticism of those outcomes don’t make one a socialist. Indeed, Francis even includes a disclaimer against “an irresponsible populism,” even while blasting economies that “attempt to increase profits by reducing the work force and thereby adding to the ranks of the excluded” in the same sentence.

For those familiar with Catholic teaching on economics, Pope Francis speaks in a consistent voice with his predecessors.

So, some snips to make the points clearer:

Almost all of the coverage of the document failed to note the actual purpose of the apostolic exhortation, which was to evangelize in the real world….

The Gospel, Pope Francis insists in Evangelii Gaudium, transcends those by reminding us to be mindful of the human cost of markets, and to feel the pain of those who are impoverished rather than dismiss them as mere statistics – like “the 47 percent,” for an example. The central point for Catholics is to evangelize the Word of God through proclamation and service, and not “capitalism,” or “socialism,” or “utopianism.” Francis scolds governments for not structuring their economies better to prevent injustices, but the emphasis in Evangelii Gaudium is on individual action….

Near the end of the exhortation, Francis notes that the state has a responsibility to promote the common good through “the principles of subsidiarity and solidarity.” The key concept of subsidiarity in Catholic doctrine rejects Marxism and command economies, teaching that “a community of a higher order should not interfere in the internal life of a community of a lower order” (paragraph 1883)…

Pope Francis uses a small part of Evangelii Gaudium to challenge Catholics not to invert the means over the ends, i.e., to fall so in love with economic philosophies as to become blinded to their pitfalls and negative outcomes. Far from demanding top-down control over economies, Francis is exhorting Catholics to act personally when they see injustices, and in that effort bear witness to the truth of the Gospel.

If that makes us uncomfortable – and clearly that part of Evangelii Gaudium will do so for Catholics inclined to support market-based economics – it serves as a reminder not to dull our senses so that we grow deaf and blind to the sufferings of the poor, just as the Gospel demands.

And it serves as a blueprint for the way forward.

“The title — ‘The Joy of the Gospel’ — says it all: We need to speak boldly about Christ and the Gospel and do it with joyful lives, engaging the world,” Archbishop Joseph Kurtz of Louisville, Ky., the newly elected president of the U.S. Conference of Catholic Bishops, told the Register.

George Weigel, the author of Evangelical Catholicism: Deep Reform in the 21st-Century Church, told the Register that Pope Francis was building on the foundations of his predecessors, but he also identified something “new” from the Church’s first Latin-American pope.

“He puts the New Evangelization at the very center of the Church and orients everything else around it,” said Weigel. “This exhortation demonstrates the seamless continuity between John Paul II, Benedict XVI and Francis and the continuity between the John Paul-Benedict interpretation of Vatican II and Francis: It’s all about recovering the missionary vocation of everyone.”

Happy to say that I’ve had George Weigel, Archbishop Kurtz, and renowned evangelist Fr. Robert Barron on my show in the past two weeks to talk about what seems like constantly breaking news with this pope and social policy. Each and all have reinforced their enthusiasm for the way and the words Francis chooses to engage the world today. Fr. Barron referred to it as an urgency, like ‘grabbing the lapels’ urgency to make an important point, an urgency he said started with the Apostles.

Wow. It’s been a long time since we’ve felt that. Fr. Barron continues:

“Pope Francis is clear: The one thing that positions everything that the Church seeks to accomplish, from worship to catechesis to efforts to serve the needs of the poor, is the central and urgent task of evangelization.”

And what is its message? The sense of urgency is in the response.

“How can it be that it is not a news item when an elderly homeless person dies of exposure, but it is news when the stock market loses two points?” Francis asks.

The Holy Father acknowledges that his strong words might bruise the feelings of some Catholics, but he said that was not his intention.

“My words are not those of a foe or an opponent,” Francis states. “I am interested only in helping those who are in thrall to an individualistic, indifferent and self-centered mentality to be freed from those unworthy chains”.

He’s rattling those chains. And we’re hearing him, loud and, hopefully, clear.