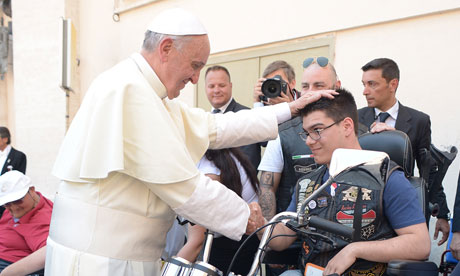 He is the spiritual father the world is looking for, whether they realize it or not.

That’s how papal biographer and Vatican analyst George Weigel put it when we spoke the other day to mark the first anniversary of Jorge Bergoglio’s papacy.

The analysis of his first year, and what it’s the first year of, continues.

A year into the papacy of Pope Francis, however, the world and the Church continue to wonder just what this pontificate will bring — and no small part of that puzzlement, it seems to me, has to do with the “narrativizing of the pope” that has been underway in much of the world media for the better part of a year. Perhaps now, on this first anniversary of his election to the Chair of Peter, it’s time to set aside the narratives and look at what the pope has actually said and done, in order to get a better sense of where he may be leading more than 1.2 billion Catholics and those outside the Catholic Church who look to Francis for leadership and inspiration.

His most significant papal document to date, the apostolic exhortation Evangelii Gaudium, showed him to be a man completely committed to reenergizing the Church as a missionary enterprise. This evangelical vision of the Catholic future, which was the dominant motif of the last half of the pontificate of John Paul II, is also in continuity with a regularly repeated injunction of Benedict XVI: The days of culturally transmitted Catholicism, or what some might call Catholicism by osmosis, are over and done with.

Though the continuity in teaching and tradition remains unbroken and unchanged, there’s a new tone and style and character in the chief shepherd’s office.

For all his high media profile throughout the world, Pope Francis is actually committed to a certain downsizing of the papacy. His recent complaint about the image of the pope as “Superman,” in an interview with the Italian daily Corriere della Sera, is not simply a matter of Bergoglio’s objecting to journalists’ turning him into something he knows he isn’t; it reflects his sense that, when the pope is the sole center of attention in matters Catholic, all others are getting a pass on their evangelical responsibilities. Much attention has been paid, over the past year, to what are essentially symbolic aspects of this papal downsizing…

Check them out, he names several.

At the same time, this papal downsizer has shown himself to be a deadly serious reformer of the Roman Curia: a task, he told the Corriere, that was the primary concern of the conclave that elected him. His creation of a new secretariat for the economy as one of the premier offices of the Curia, and his naming of the no-nonsense Australian cardinal George Pell to head it, is little less than an earthquake in the structure of the Holy See. Finance, personnel policy, and administrative oversight have been taken away from what Francis evidently regards as a sclerotic Italian bureaucracy. And those responsibilities have been given to what is expected to be a lean (and, when necessary, mean) operation, which in its crucial first years will be headed by one of the toughest and shrewdest of churchmen, who (not unlike Francis) combines a priest’s heart with a keen nose for corruption.

Francis’s challenge to his newly named cardinals — that they think of themselves as servants, not courtiers — is another expression of his determination to challenge everyone in the Church to greater evangelical fervor. So was his recent charge, to the Vatican office that helps the pope select bishops, to search widely — perhaps more widely than has been the case in the past — to find for Catholicism the local leaders it needs: men of proven evangelical determination, who can call both priests and people to live their missionary vocation more actively, often in difficult cultural circumstances.

Anyone who followed the naming of new cardinals noticed immediately that the pope went, literally, to the ‘existential peripheries’ to which he refers often.

Which brings us to something else that ought to have been learned about Pope Francis over the past year: this is a man with a deep, compassionate, yet searching sense of the profound wounds that postmodern culture inflicts on individuals and societies. Many regarded it as something of a throwaway line when, in one of his daily Mass sermons, the pope made a positive reference to Robert Hugh Benson’s 1907 novel Lord of the World, the first of the 20th-century literary dystopias. But the more closely one reads Pope Francis, especially in those daily homilies, the more one begins to get the sense that Benson’s vision, of a world in which power-madness and aggressive secularism masquerade as reason and compassion, is quite close to Bergoglio’s vision of what he has sometimes described as the idolatries of our time. The pope has spoken passionately about those who have been left behind, materially, in the world economy. But he has spoken just as passionately about the spiritual and cultural impoverishment that comes from imagining that everything in the human condition is plastic, malleable, and subject to change by means of human willfulness.

This is important, in any hope of understanding this pope and where he is leading people.

The pope knows that, amid the polymorphous perversities of postmodernity and the pain they cause, the Church attracts primarily by witness, not by argument. To those who imagine themselves beyond the reach of compassion, the Church offers the experience of the divine mercy. No one, the pope insists, is beyond the reach of God’s power to forgive. That experience of mercy, in turn, opens up its recipient to the truths the Church proposes: the truths the Church believes make for the human happiness that is being eroded by the idolatries of the age, especially the idolatry of the imperial autonomous Self. Mercy and truth are not antinomies, in the Catholic scheme of things. Mercy and truth are two entwined dimensions of God’s reach into history, and into individual lives.

Time [magazine] read the Pope’s self-query, “Who am I to judge?” as the opening wedge to that long-awaited concession by the Catholic Church that it had been wrong, all along, about the sexual revolution. That is not what the pope thinks, having gone out of his way in Corriere della Sera to praise the “genius” and “courage” of Pope Paul VI for “applying a cultural brake” in the encyclical Humanae Vitae, for standing fast against the tidal wave of Sixties permissivism that has led to so much unhappiness and sorrow, and for opposing “present and future neo-Malthusianism.” When Francis asked, “Who am I to judge?” he was responding as a pastor to the particular situation of a man experiencing same-sex attraction. And as the pope said, if that man was trying, with the grace of God, to live an honest and chaste life, he ought not be judged by his temptations, any more than anyone else in this world of endless temptation. Mercy and truth, as always, go together. For the mercy that tells us that we are not beyond the pale of forgiveness is the mercy that leads us into the truths that make for genuine human happiness.

Jorge Mario Bergoglio is a very old-school Jesuit, and it’s clear that, as such, he is going to be pope his way, not anyone else’s…

And as such, he is capturing the world’s attention, for reasons they may not even know or be correct in identifying. All they know is that he is reaching the human heart and mind and soul on a depth not even perceptible to the senses, except for that of the transcendent. Many people who are not Catholic, including the altogether un-churched, have called him ‘our pope’. And so he is.