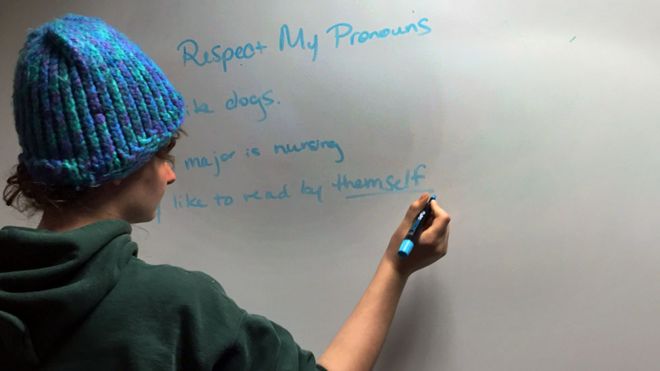 For all its difficulty in other ways, the English language is wonderfully simple in the matter of gender. People may feminise objects and roles, calling ships “her” and female flight attendants (in one brief, perhaps benighted era) hostesses, but these are passing conventions. Only pronouns have grammatical gender: he, she, it; him, her, it; his, her(s), its. Plurals are neutral: they, them, their(s). Easy peasy.

But for some people today that simple scheme has become a straightjacket. It offends them. It is that altogether horrid thing, a gender binary, implying that the human race is either male or female, when they consider themselves neither, but located – or moving around –on a spectrum in between. Listen to student Kit Wilson who identifies in a BBC article as “genderqueer”:

“Neither end of the spectrum is a suitable way of expressing the gender I am…”Sometimes I feel ‘feminine’ and ‘masculine’ at the same time, and other times I reject the two terms entirely.”

And this mature adult (from a Financial Times piece):

“I, for example, consider myself as gender fluid or gender variant. I like to be Phil one day and Pippa another, using different forms of dress and make-up to do so. I do it at home and at work. I am straight, have been married for more than 20 years and have two children.”

Kit and Phil/Pippa do not want to be referred to as he or she, him or her, Mr, Mrs or Ms. If a courtesy title is to be used, Phil/Pippa wants it to be the non-committal Mx (pronounced mix). Kit wants people to use the pronoun “they” when talking about them (that is, about Kit).

Most of us are familiar with this trend and struggle with the question of whether we will offend our mother-tongue and use an existing plural pronoun for a single person, or offend that person by not calling her “they”. We may more easily get our heads around an additional honorific such as “Mx”, even if we do not like it. After all, we got used to “Ms”.

But the gender grammarians have been hard at work and things are becoming much more complicated than that. A card developed by the LGBT Resource Centre at the University of Wisconsin-Milwaukee in 2011, and widely disseminated since, lists eight pronouns on one side (see below). These include the standard he, she and they, but also e/ey, per, sie, ve and zie – and their declension. The other side of the card has fill-in-the-blank sentences for practice — for example: “[      ] laughed at the notion of a gender binary.” 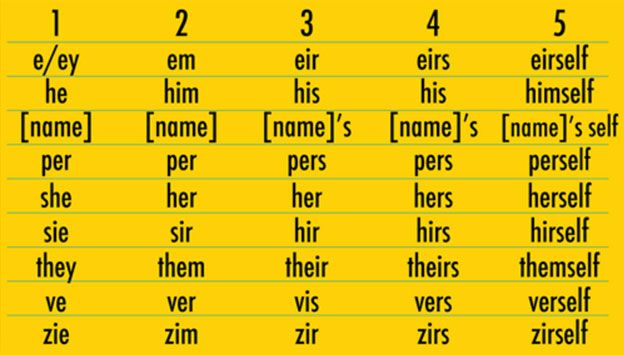 So far, this is rather futuristic stuff (and some activists have gone much further), but the trend is gaining ground at universities. LGBT groups provide displays and badges encouraging students to “Ask Me About My Pronouns”, professors are invited to training sessions, and some administrations allow students to register their preferred name and pronouns on university computer systems. At the University of Vermont, which has led this movement, students can choose “ze” as well as “name only”, meaning that they don’t want to be referred to by any third-person pronoun. It took six months and cost $80,000 for the university to create a software patch for this purpose.

Outside the academy, OxfordDictionaries.com has added “Mx” as an honorific — something the Royal Bank of Scotland adopted two years ago (which hasn’t save it from having to be propped up by the UK government). Late last year the Washington Post newsroom was given the go-ahead to use the singular “they” because it was “useful in references to people who identify as neither male nor female.”

But The New York Times, which is leading the mainstream US media in promoting transgender rights, is taking a cautious approach to gender neutral language. After it published an article in November using “Mx” (in an interview with a self-identified gender “anarchist”), a number of people wrote asking if the Times had formally accepted the term. No, said Philip B. Corbett, who oversees the paper’s style manual and usage rules, it had not. Nor was it rushing to embrace the singular “they” or the newly-minted “ze” and “xe”.

“In this as in other areas of language and usage, The Times is not looking to lead the way, set the rules, or break new ground. Our hope is to reflect accepted, standard usage among educated readers.”

If only The Times were as sensitive about our moral heritage.

And yet the new gender language is not just a literary issue; not just another evolution of the English language. It is a moral issue, part and parcel of a radical sexual agenda whose most critical front is not in the university or the press, but in schools. Grammar has not been a popular classroom subject in recent times but it is about to take on new life as handmaiden to gender diversity programmes.

Take the video, What are Pronouns?, part of a teaching resource put out by an Australian LGBT network a few months ago to reduce bullying of LGBTQI students and “heteronormativity” – the “belief system” that male-female attraction is normal. It is strongly supported by the Australian Education Union. Watching the video 13- and 14-year-olds will learn not only to ask a person about their “preferred pronouns” but that “genitals and body don’t actually reflect anything about a person’s gender at all.” Respect for someone’s pronouns becomes another opportunity for indoctrination with gender ideology.

Whether this will increase respect among young people for peers confused about their sexuality and decrease bullying remains to be seen. In the meantime it quite clearly infringes the right of children to learn and express any other story about their bodies and sexuality.

No civilised person wants to offend another unnecessarily, even if it seems the other is mistaken or irrational. What exactly to do about pronouns and titles in particular circumstances is not yet clear to me, and has yet to be decided by MercatorNet as such. But I am sure than any wholesale manufacture of words to go with the gender revolution has to be resisted.