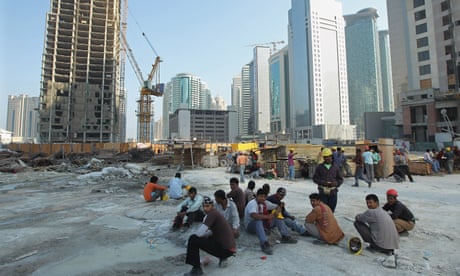 In late 2010 FIFA announced that the 2022 Football World Cup would be held in Qatar. At the time, and since, there have been questions raised about the choice of Qatar. Allegations of bribery of the voters have been made, while the lack of human rights of migrant workers building the necessary infrastructure in Qatar has also been in the headlines.

With this background in mind, this report from the World Tribune shows the scale of the Qatar’s foreign worker population. In 1986 373,000 people lived in Qatar. Nowadays, according to census figures released on June 5 by the Ministry of Development Planning and Statistics, the population is around 2.4 million, but a staggering 58 percent of that number (1.4 million people) consists of migrant workers. Of these 1.4 million workers, 1.34 million are male. The vast majority of these migrants come from the subcontinent: India, Pakistan, Bangladesh, Nepal and Sri Lanka. While hundreds of thousands also come from the Phillipines and Egypt.

The workers live in what the Qatari government calls “labour camps” an d these camps are not any better than they sound. Amnesty International has described these camps as “squalid and cramped accommodation”, while the World Tribune notes that:

“Migrant laborers who work on Qatar’s numerous infrastructure projects have long complained of the conditions they work and live in.

Last week, 11 people were killed and 12 injured when a fire ripped through a camp housing laborers working on a tourism project in the southwest of the country.”

The international criticism has obviously had some effect as the Qatari government is seeking to improve the conditions in which at least some of the huge migrant labour population lives in by building “labour cities”. The government has started developing seven huge complexes which include shops, cinemas and cricket stadiums (the sine qua non of civilised existence…) and which will house about 260,000 people in total. (Again, note that even these cities will only house about a sixth of the entire migrant worker population in Qatar!) I wonder how many of those working on these cities will get to live in them once they are completed?

What an incredible country – I knew that there were many people working in the Arabian peninsula from overseas (that is why Pakistan plays its “home” cricket games in the UAE while it is too dangerous for teams to travel to Pakistan) but I had no idea that the proportion was so enormous! Let us hope that the conditions of Qatari migrant worker population improve and that international attention continues to spur the Qatari government into action.