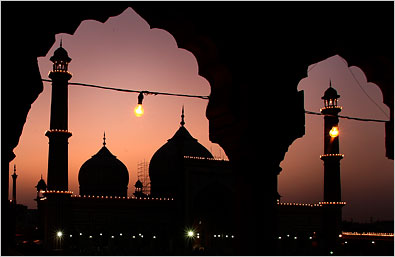 Recent reporting on the Pope’s remarks to journalists has lowered my estimation of the media’s knowledge about religious things to near rock-bottom. That’s why I should probably be careful in parroting this report on Ramadan carols in Central Asia. I assume that it is correct (and not missing out vital details) but I cannot be sure – it is after all a religious topic and as I say, the media and religious topics do not seem to result in accurate stories.

As far as the story goes, it’s quite cute. Little children going to door-to-door singing carols for Ramadan and getting treats or money for their efforts – a mash up of Christmas carolling and Halloween. (As an aside, I am so disappointed that we in New Zealand seem to replacing Guy Fawkes’ night with Halloween – a terrible American import that downplays our British links to allow the shops to sell more rubbish food and rubbish costumes for grasping kids. Grumble grumble grumble.)

“Ramadan fasting in Tashkent was nearly over on the evening of July 10 when Lola Yunusova heard a loud knock on her front door.

Opening it, she was met by three children practicing a tradition found mostly only in Central Asia — Ramadan caroling.

Much like Christmas caroling in the West, during Ramadan Central Asian children go door-to-door to sing for their neighbors. As with Halloween’s “Trick or Treat” tradition in some Western countries, Central Asian carolers ask for a treat — usually receiving money or candy.

But unlike Christmas and Halloween, Central Asian Ramadan caroling can last an entire month and that’s why Yunusova sometimes finds the tradition tedious.”

What is interesting for our purposes about this tradition is that the lyrics of some of these songs reflect the preference for male children prevalent throughout the area and much of the rest of the world. (See our report on the gender imbalance at birth in parts of the world here.)

“One typical Uzbek blessing says: ‘We came and sang a Ramadan song at your door. We are wishing you’ll next have in your cradle a boy who is as strong as a ram.’

But there is an acerbic edge to the tradition as well, with carolers pouring scorn on those who don’t offer treats: ‘We came and you heard us sing, but you didn’t give us anything. May your newborn turnout to be a girl — not a boy.’

Of course, these views can manifest in different ways. While children sing hoping for a boy, some parents abort their female babies or abandon them at birth. This is not some issue for obscure parts of the world that the enlightened West is somehow immune from. (Enlightened because we abort both boys and girls in extremely large numbers – we’re not discriminatory.)  Such views about the desirability of boy children over girl children have been seen in the UK. Remember the furore last year when the Daily Telegraph newspaper did a sting about abortionists agreeing to abort babies because they were girls and the parents wanted a boy? It seems that everyone was upset because the babies were being aborted for the wrong reasons. If only the parents had said that the girl wasn’t convenient for our stage of life right now, then no one would have batted an eyelid. So before we get all high and mighty about those backward, uncivilised Central Asian children signing such sexist lyrics, maybe we should consider the West’s version of those lyrics:

“We came and you heard us sing, but you didn’t give us anything. May your newborn turn out to be an inconvenience and your abortionist be on holiday until after birth.”