There is no human nature because there is no God to have a conception of it … man is nothing else but that which he makes of himself. ~ John Paul Sartre

We are in a fierce life and death cultural struggle over the meaning of human nature and reality in the cosmos. Our postmodern culture insists we are nothing but a clump of cells but as autonomous selves we can do whatever we want and define who we are.

Into this morass comes a call from the film critic at the Washington Post making the case that “we” (there is always a we) need films with “really good sex scenes” to retain an essential “part of classic cinematic grammar” we are missing.

This article simply confirms the depth of our loss of community and cultural consensus on what is beautiful, good and true. Our young people have never experienced being a part of a world with a shared moral order. With the current cultural meltdown, it is hard to see how any kind of consensus on who we are and where we are going as human beings can be retained.

And yet, from my experience of sharing classic films with young people for over two decades, I have discovered that the greatest of the films from Hollywood’s Golden Age give them a vison of human nature they can readily recognize. We are made to see with the “reasons of the heart” which Blaise Pascal maintained are the source of love and reality.

Four films illustrate the reality of this recognizable classical moral anthropology: Double Indemnity (1944), Roman Holiday (1953), It Happened One Night (1934), and Love with the Proper Stranger (1963). These cherished films are deeply loved by two groups of classic movie fans: the folks who celebrate the onset of the sexual revolution in the 1960s, and those who deeply regret it.

Crossing the generations, there is a mysterious solidarity among people with deeply divergent political and religious sensibilities – a solidarity that demonstrates again the power of the transcendentals (beauty, goodness and truth) to overcome the “isms” that permeate our culture today.

The canon of five-star films of the Golden Age depict a recognizable moral order and a view of our common humanity that almost everyone can see in themes, events, and character portrayals. We included these four films and others in our theme-based classic film study guide, Men and Women in Love: The View from Classic Hollywood.

A forgettable work of pulp fiction becomes the definitive Film Noir narrative of love on the dark side. 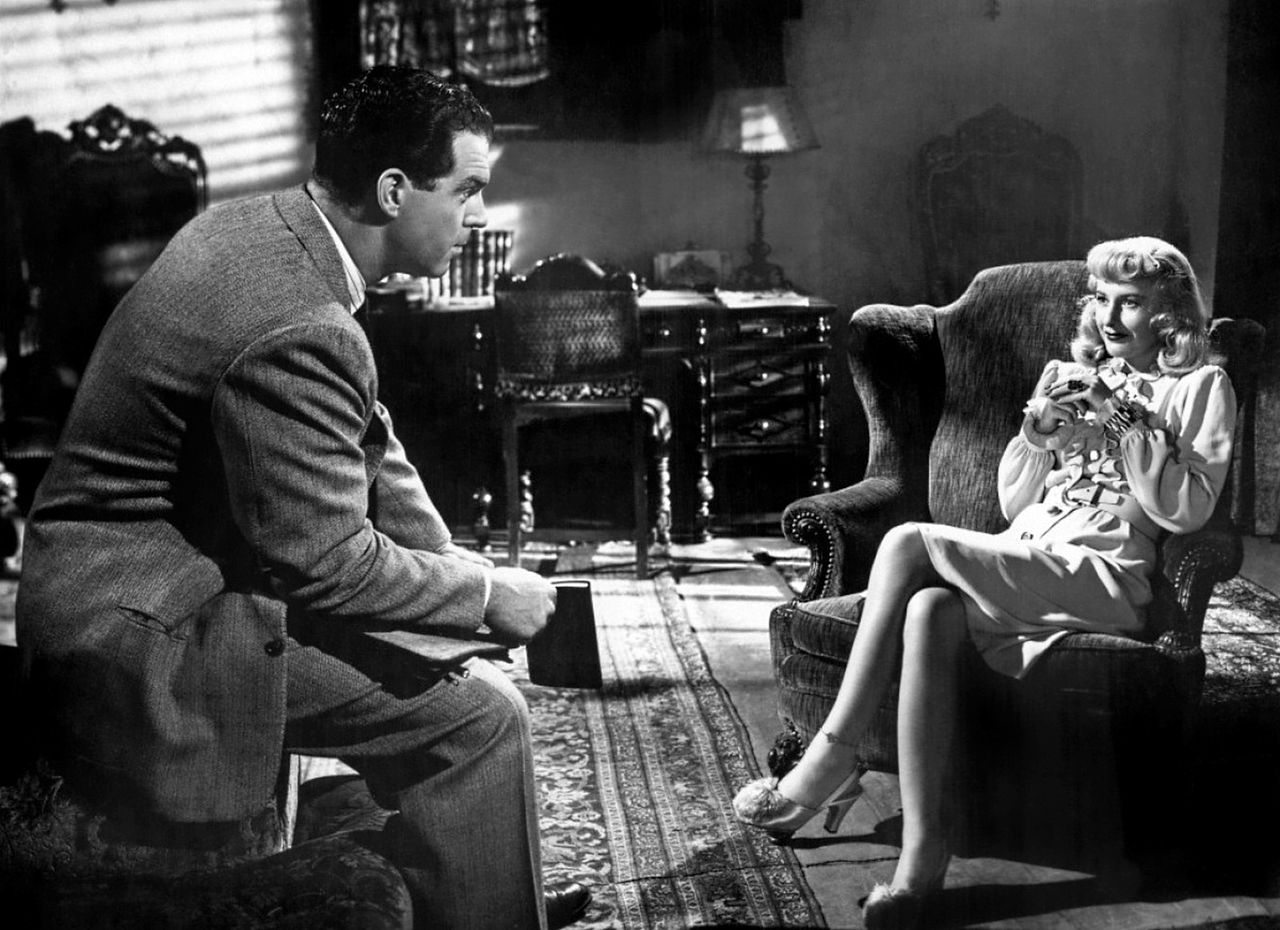 The Motion Picture Production Code that became operational in 1934 mandated an amazing collaboration that took place between the Production Code Administration (PCA) and the studios.  Challenging and difficult negotiations would historically center on films like Double Indemnity that were adapted from a controversial novel or a play.

Consider the first principle of the Motion Picture Production Code: No picture shall be produced that will lower the moral standards of those who see it. Hence the sympathy of the audience should never be thrown to the side of crime, wrongdoing, evil, or sin. Clearly the Code was rooted in a natural law understanding of human nature, the idea of a universally knowable account of good and evil and right and wrong. The narrative of contemporary film critics often will portray the Code as merely arbitrary and puritanical, an imposition of censorship on the creative talent of the filmmakers.

Films like Double Indemnity depict a classically realist view of human nature. While the naturalism of films like Citizen Kane appeal to many, it is the films that tell the whole truth about who we are as human beings that win the most votes. Father Daniel Lord S.J., the author of the Code, understood the power of cinematic art to impact the human psyche. He described what is happening as we are watching a movie as “the presentation of human thought, emotion, and experience, in terms of an appeal to the soul through the senses.”

It took eight years for the filmmakers and the PCA to come to terms on this dark tale of the human condition, as Robert Osbourne (late host of Turner Classic Movies) explains in his introduction to Double Indemnity. The story’s author, James M. Cain, had made the character of Phyllis a habitual sociopathic murderess in his original story. At the end of the novel, Phyllis and Walter Neff, the insurance agent she has seduced into killing her husband, commit suicide by jumping off a boat.

In the film, Walter Neff redeems himself and Phyllis is given a last-minute possibility of a change of heart. The Production Code Administration demanded that the character of Phyllis (played brilliantly by Barbara Stanwyck), be seen as having a minimal capacity for moral choice. The character of Walter ultimately makes crucial choices that redeem his character as an acting moral person. The character of Keys, played by legendary tough guy Edward G. Robinson, is expanded into the voice of conscience in a morally disordered world.

No wonder preview audiences rebelled against the discarded final scene depicting a heartbroken Keys watching Walter go to the gas chamber. Is there anyone in the audience who is not in deep sympathy with Walter? Fred McMurray, known for romantic comedy roles until this film, gives what is considered by both critics and fans as the finest performance of his career. Double Indemnity ranks as one of the greatest films of all time. In our postmodern era, it can only be because the film ultimately tells the truth about the human condition.

The mystery of loss and gain in real life: Roman Holiday 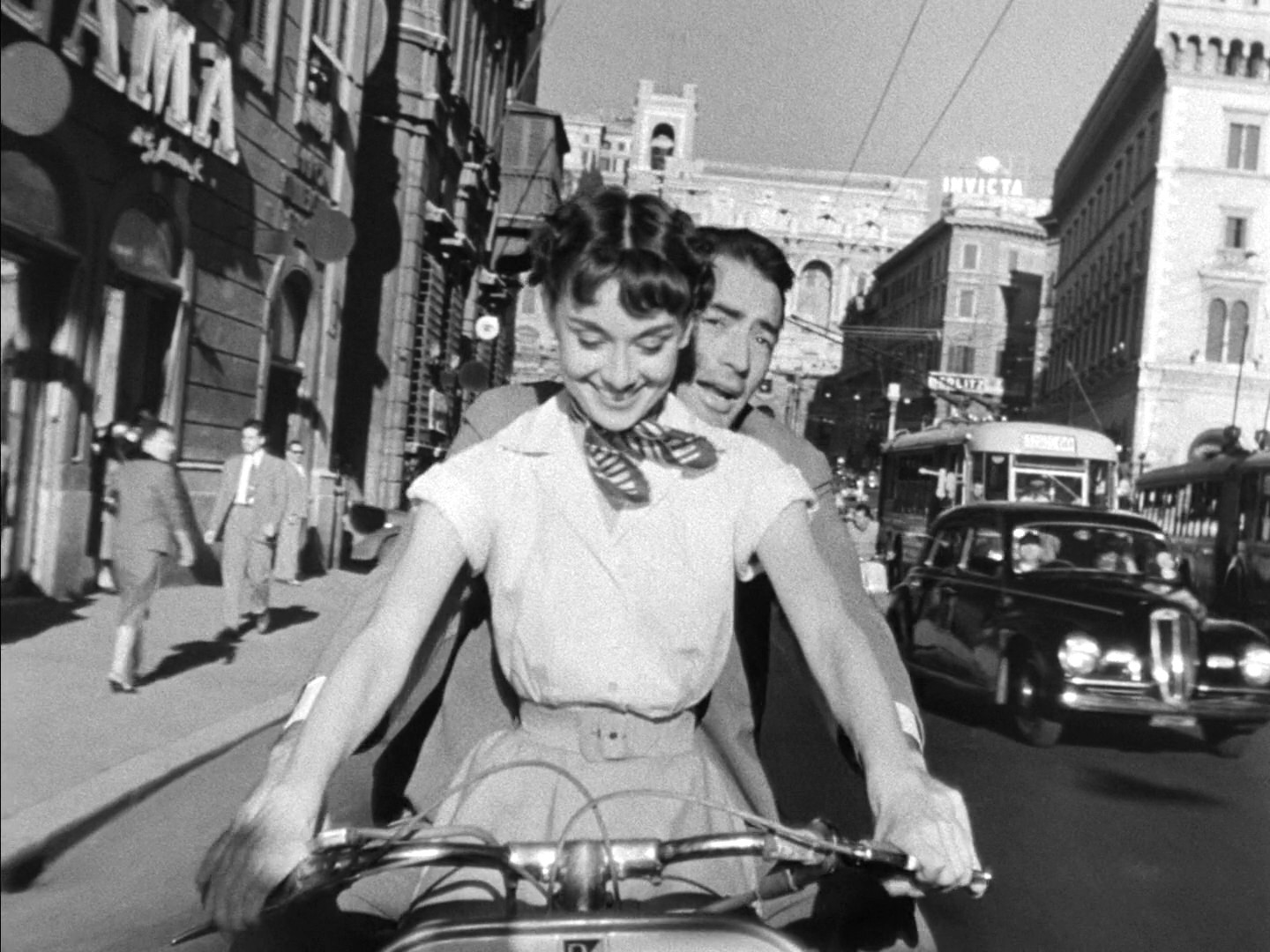 Audrey Hepburn and Gregory Peck in Roman Holiday, 1953. via Wikimedia

Roman Holiday shows us the reality of how destiny and free will can be combined. An educator friend of mine piloted our classic film program with a group of young men in a Houston, Texas alternative school. These students had never seen a black and white classic film and had no knowledge of screen legends Audrey Hepburn and Gregory Peck. Here is what one young man wrote in his post-viewing evaluation: “How do you spell phenomenal? This program has changed the way I feel about girls. I now have respect for them. I learned also what it means to be a real man from watching Joe Bradley and how I should act in any situation.

Moral psychologist Jonathan Haidt, author of The Righteous Mind and co-author of The Coddling of the American Mind, has shared with us the fruits of his extensive neurological research on the feeling of “elevation” that arises in human beings. Haidt showed how a feeling of elevation causes persons to become more caring and compassionate towards others, while persons who reported a feeling of “happiness” were more oriented to their own personal well-being. The social experience of watching and discussing Roman Holiday and other great films that tell the truth about who we are can give young people this mysterious but very real sense of elevation.

Rebuilding culture and community: It Happened One Night and Love with the Proper Stranger

History is driven, over the long haul, by culture -by what men and women honor, cherish, and worship; by what societies deem to be true and good, and by the expressions they give to their convictions. ~ George Weigel

Natalie Wood and Steve McQueen in Love With the Proper Stranger, 1963.

In these two films, the images and ideas of a timeless natural law anthropology come alive. In our classic film study program, young people can analyze the norms and sexual values depicted in It Happened One Night (1934) and Love with the Proper Stranger (1963). The characters use their reason and will in the making of moral choices that drive the narrative. We encounter characters united in body and soul with discernable and striking powers of imagination, reason, memory, free will and moral choice in play.

With It Happened One Night, young adults living in a normless wasteland can recognize in “the Walls of Jericho” the common-sense value of cultural and moral standards. Young people, struggling to make sense of their lives in a toxic culture, can gain clarity watching Natalie Wood and Steve McQueen in Love with the Proper Stranger confronting the moral choice they cannot avoid. They make the life choice not to have an abortion.

It is films that elevate the senses by showing the moral drama of human love that we need today, not “really good sex scenes.”

Onalee McGraw, PhD, is Director of the Educational Guidance Institute, which produces classic film study guides. These can also be found at Amazon.