In the West we watched the Berlin Wall coming down in 1989 with wonder and incredulity. East Germany had been famous for its formidable performances at the Olympics and for its dour, old-guard head of state, Walter Ulbricht. Now its most famous former citizen is the highly successful German President, Angela Merkel. But what of the ordinary people of the country that collapsed overnight in the joyful chaos that followed the collapse of the Communist regime? In this honest memoir, writer Maxim Leo pieces together the conflicting histories and political divisions within his own family in order to make sense of his country’s past.

His book is largely written in the dramatic present tense, the result of interviews with his paternal grandfather, Werner, once a young Nazi, now a 95-year-old obedient citizen of the GDR; his bohemian and middle-class parents, Anne and Wolf; and his research into the past life of his maternal grandfather, Gerhard, a German-Jewish hero of the French resistance, but now unable to speak, following a stroke. It has the ring of affectionate if exasperated authenticity, as the grandson weaves his way through the feuds and silences, the “rage and grief” of his relations, indirectly showing up the lies inherent in the regime controlling their post-war lives.

As he remarks, ironically, “The GDR…is still quite alive in my family”; the wounds are not healed as quickly as it takes to destroy the bricks and mortar of the Wall itself. Leo, who longed for a “real family, without a barricade”, instinctively saw through the Communist propaganda he was given as a child. He relates one very amusing anecdote when, aged only eight, he had to write an essay on “Why the state border must be protected”. He wrote guilelessly, “Because otherwise everyone would run away…”Not surprisingly, he received a low mark and a reprimand from the teacher. 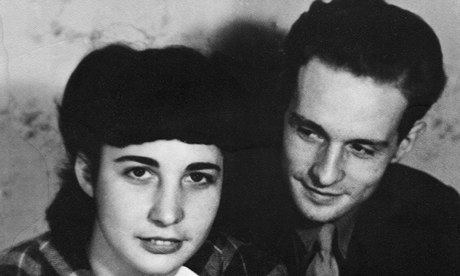 Inevitably, the War scarred the lives of his grandparents, formed by different cultures and circumstances. Leo admires Gerhard (pictured left), exiled from Germany as a Jew, who did not betray Resistance secrets under torture; yet he also comes to understand, even if he cannot admire, Werner, whose life is a challenge to the author’s assumptions: “I came from a Jewish resistance family and now Werner turns up and shows me how great things were under the Nazis.” From his account, it seems that Werner was one of those unquestioning, somewhat passive types who accept whatever authority is in charge. His grandson concludes that he “would have fitted in to any society…he would always have made the best of things.” He decides that for both his grandfathers the GDR “was a kind of dreamland in which they could forget all the depressing things that had gone before.”

Leo’s parents, Anne and Wolf, are presented with perceptive sympathy, even as their son indicates his own youthful rebellion against their outlook on life. Anne, a respected young journalist in the new East Germany, suffered her own acute disillusionment with Communism, as she realises how pervasive is the deliberately mendacious media propaganda against the West. Many of her journalist colleagues take to the bottle: “When people lie, they also have to drink” she is told by a friend of her father’s. Wolf, his father, an artist, is a natural rebel, never at ease in “that country where so many homeless people sought a new beginning.”  Unlike the grandparents’ generation, Leo’s parents and their circle of friends saw through the “dream” to the lies, the poverty, the claustrophobia and the chronic suspicions of daily life in East Germany; yet it took their son’s generation to reject the GDR conclusively as “the country of old men.”

Leo describes a trip to France he was allowed to take with his grandfather, Gerhard, when he was just 16. It is a revelation of colour, vibrancy and freedom, in contrast to the greyness, constant surveillance and rigid conformity of his homeland, where “the GDR was always … in bed with us”; he instantly decides he will live in the West when he is older. He creates a vivid picture of the last tumultuous weeks of the GDR, as the regime began to lose confidence in itself and the border guards ceased to be a threat. One night his parents go to bed and “by the next morning the GDR has almost disappeared.” Leo’s book won the European Book Prize and one can see why: a graphic, personal and sensitive account of history in the making.