A new and very large nationally representative survey of Americans is shedding much light on the religious and relationship lives, behaviors, and attitudes of adults. It’s called the Relationships in America study, and a report on it was released earlier this week from the Austin Institute. I’m a senior fellow of the Institute, and had a hand in the survey’s design and construction—approved by the University of Texas—and in editing the report whose key findings I’m about to describe.

As an early reader noted, the report is like a train wreck—it’s horrifying and fascinating at the same time. Take a look for yourself. While there’s more bad news than good, in this essay I want to dwell on the positive.

First, a few words about the study itself. The survey employs a very large weighted probability sample. Thus, it represents the diversity of American adults’ contemporary experience. GfK, formerly Knowledge Networks, fielded the survey in early 2014 using their nationally representative panel of adults. They collected information from 15,738 persons between the ages of 18 and 60. No more complaining about “too few evangelicals” or “not enough young adults” to draw conclusions, because this study is big.

Before I discuss some things I find encouraging in the report, let me mention a few indicators of bad news. Americans today:

– Consume plenty of pornography: 43 percent of men have in the past week

– By and large consummate their marriages before the wedding

– Think about leaving their unions at notably elevated rates

Although these are disheartening statistics, plenty of the information in the report simply illuminates—it informs us about what’s going on among religious Americans, married and cohabiting Americans, young and old, men and women. To learn, for example, that self-identified evangelical Protestants comprise 9 percent of the population is interesting. Similarly, learning that only 37 percent of Americans report believing in a bodily resurrection of the dead is illuminating, especially given that two out of three Americans report being Christian, and the resurrection is a long-held core doctrine of Christianity. And the sex-ratio disparity in congregations (Figure 2.4) is alive and well, though smaller than I once believed it to be.

But some of what the report says is not only illuminating but actually encouraging, at least to this marriage fan. Here are several survey results that ought to foster hope.

When reading these results, keep in mind that the Relationships in America survey is not longitudinal. That means that we cannot tell if people are changing their minds. Nor is it a trend analysis—I don’t know from looking at it (alone) whether attitudes or practices are shifting in one direction or another. For example, nearly seven times as many adults said marriage is not outdated as said that it is (66 percent vs. 10 percent). But perhaps ten years ago the gap would be even wider than it is now. From these data, we can’t tell. But even with these limitations, this study can tell us some very significant things.

First, the share of Americans in cohabiting unions—and even dating relationships—that report wanting to be married is quite high. Marital ambitions and wishes are hardly dead. More women than men want marriage—nothing unusual there. (More women than men want out of marriage, too. Again, not a new story.) Of note here is the fairly tight gap between dating and cohabiting, indicating that the shift from one to the other may not radically elevate the desire to be married, which hovers in the 40th percentile for unmarried (but coupled) men and the 50th percentile among such women. What we cannot learn from this, however, is how the same figure might have looked 10, 20, or 30 years ago. My hunch, based on evaluations of mating market dynamics, suggests that these figures are probably lower than in the past. That is unfortunate.

Other pieces of good news come less in the form of straightforward numbers than in the comparison of the youngest members of the sample to the oldest. This is especially true in the section on relationship attitudes, which offers some of the most interesting information in the report. While the report’s analyses are unable to distinguish age from “period” and “cohort” effects, the remarkable lack of strong differences between age groups on a series of attitude items reveals several encouraging things.

First, younger Americans are not “lost” on marriage and relationship matters. Yes, they lean in a slightly more permissive direction than older Americans. But that has long been the case. The item that appears most polarized between younger and older Americans is on the acceptability of “polyamory.” But even here the gap between its youngest and oldest supporters is modest (with 20 percent support among youngest, and 12 percent among the oldest), a gap comparable to that concerning the legality of same-sex marriage. The bottom line is that youth are nothing like twice as permissive about relationships. They lean in that direction, but they always have.

Second, younger Americans are also more idealistic about relationships, including in their support of the idea that marriage ought to endure, as well as their disdain for extramarital relationships. 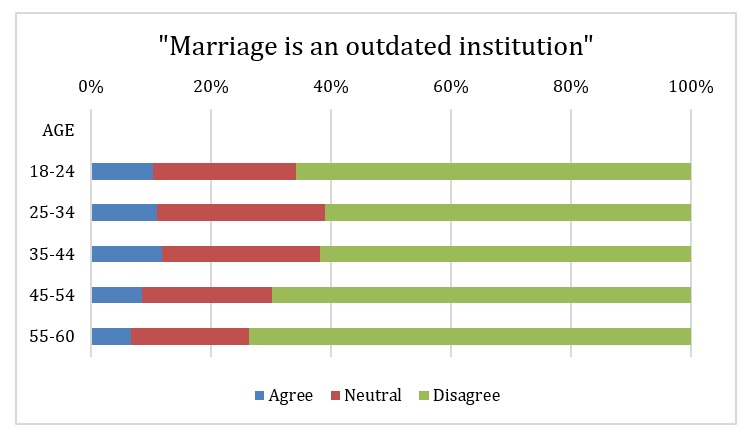 Experience that comes with age, it seems, wears some Americans down, or causes a one-size-fits-all relationship ethics to recede. The youngest group (18-24-year-olds) is more hopeful about marriage (as an institution) than are those Americans who are slightly older. In fact, it is those Americans age 25 to 44 that display the greatest permissiveness—or ambivalence—about matters of significant relationships and marriage. It makes sense, given that the lion’s share of disappointing experiences in the marriage market don’t occur until people are well into their 20s and even 30s. And disappointing experiences tend to foster a more permissive perspective on intimate relationships (including among Evangelicals.)

Third, the share of Americans of all ages who remain neutral—signifying they “neither agreed nor disagreed” with the statement about relationships posed to them—is high. In other words, there are many fence-sitters out there who are open to being convinced. A full 26 percent of 18-24-year-olds neither agreed nor disagreed when asked whether it should be legal for gays and lesbians to marry in America. The same was true of the oldest group of Americans surveyed. Any assertions of strong polarization between young and old on same-sex marriage are simply untrue. It’s not there.

While I realize the past few years have been fraught with legal defeats for family conservatives, they ought to keep perspective about the brief timeline for such change—it’s only been two or three years. They ought to retain the possibility that such a rapid change of heart among the American population on the (very old) matter of marriage may actually be illusory or shallow, and possibly both. To witness sentiment shift so rapidly may make same-sex marriage proponents publicly thrilled, but privately they are concerned about just how genuine such attitude change actually is.

Nothing is certain. Little is settled. To be sure, if you compare this data set with others gathered over the past decade, we seem to be tracking toward more permissive unions. But it’s not a guaranteed future, and Americans have long been more permissive when they’re young. Sexual norms do not evolve; they shift. And the data clearly show that plenty of Americans, including many young adults, are sitting on the fence.

Fourth, as legal victories for same-sex marriage advocates mount—and a Supreme Court decision seems in the cards for 2015—scholarly interest in maintaining a strong, sweeping version of the immutability (or “born-that-way”) argument is fading. Indeed, sociologists of gender have never had much love for a “biological essentialism” (that is, we are our genes) argument, but they have publicly tolerated it due to its political expediency. In the Relationships in America report, there is fluctuation in self-identity going on (visible in the report’s Figure 6.1), especially among 19-25-year-old women, which is inconsistent with a strong version of the immutability argument. In other words, bisexual patterns continue to create consternation among those who would suggest sexuality is a fixed trait. Men seem more consistent than women in their sexual identity self-reports. Here, too, men and women are different. In other words, the science remains young here too.

Fifth and finally, religion and family are still tracking together—arguably more than ever. Marriage is a natural phenomenon. Regardless of what you call it, a significant share of the globe’s population will track toward it, even though that share is decreasing in the United States. It should surprise no one that the most religious Americans are the strongest supporters of longstanding marriage and family practices, displaying the greatest wariness about alternative relationship forms and behaviors. Expect that to continue.

Mark Regnerus is associate professor of sociology at the University of Texas at Austin and senior fellow at the Austin Institute for the Study of Family and Culture.

Mark Regnerus is associate professor of sociology at the University of Texas at Austin, and a research associate of the university's Population Research Center. His areas of research are sexual behavior... More by Mark Regnerus