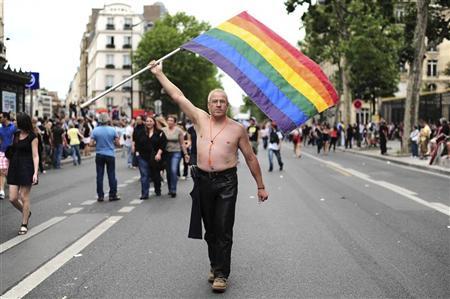 The French government plans to present its same-sex “marriage” bill to the French Council of ministers next month. The justice minister Christiane Taubira has announced the government’s agenda to the main gay lobby group, the  Interassociative lesbienne, gay, bi et trans. The text of the proposed law is still in the process of being drafted.

From a statement made by a spokesman for the Interassociative, Nicolas Gougain, it is clear that some measures are being taken to avoid provisions which might alienate potential waverers among those who support the change in principle. The current draft does not make provision for access by lesbian couples to artificial procreation although the justice minister has said that “there was no fundamental opposition on that point and that she would follow the President’s and the Prime minister’s decision”.

Prime Minister François Hollande has already promised that lesbian couples would have access to artificial insemination and in vitro fertilization. The gay lobby is accepting initial limitations in the bill to enable the government wants “to move forward quickly”, Nicolas Gougain explained.

However, groups opposing same-sex “marriage” are increasing their activities in the face of these developments. A group established for the defence of children, Collectif pour l’enfance, is calling for a widespread and official public consultation on the issue.

Catholic family associations and Catholic leaders like Cardinal Philippe Barbarin, archbishop of Lyons, have been speaking out against the proposed changes to the marriage laws. “Civitas”, a traditionalist group, is organizing a demonstration in Paris on November 18th.  Some politicians and several representatives of French rural mayors have been alarmed to learn that there will be no provision for conscientious objection in the government bill when it comes before the French Assembly.

Cardinal Barbarin made dire predictions when he spoke this week in a interview with Catholic radio, RCF. He warned that legalizing same-sex “marriage” would open the way to polygamy and incest and lead to the “breakdown of society”. Homosexual activists immediately accused him of “homophobia”. France’s continuous news radio station, France Info, went so far as to describe the Cardinal’s words as “violently” opposing gay “marriage.”

The Cardinal said in the interview, “Once it’s legalized, the consequences will be innumerable. They’ll want to create ‘couples’ with three or four members. After that, perhaps one day, the taboo of incest will fall.”  The word ‘marriage’, he said, represented a rampart, designed to protect that most fragile place in society, the place where a woman gives birth to a child, so that all conditions are met for everything to go as well as possible. This was what was now under threat.