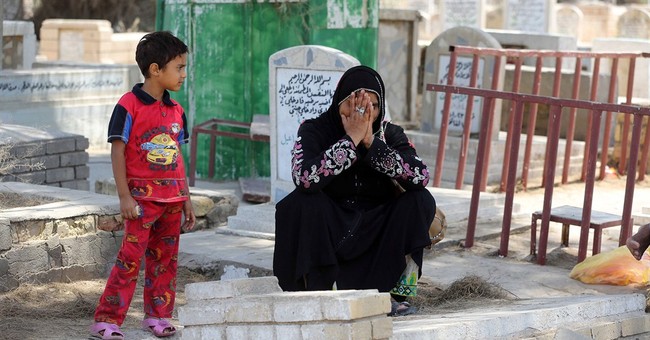 Why does this continue? Why hasn’t ISIS been stopped, long ago? Why are they advancing?

He’s reporting on the situation on the ground where the US president claims to be ‘partnering‘ with forces to drive back ISIS.

Engel said the U.S. doesn’t exactly have an ideal partner on the ground — not even in the Iraqi Security Forces, and certainly not in Syria. The Iraqi army has been heavily depleted over the past few months and reconstituted with Iranian advisers and ground forces. And many Sunni villagers, he says, are “afraid” of the Iraqi army.

And he continues to speak out from the front line, calling attention to the Kurds who desperately need help from the ‘international community.’ Because they need relief and support.

But what the Kurdish fighters lack in equipment, they make up for in fighting spirit. After ISIS swept violently into Iraq in June, the Kurds regrouped and have managed to take back much of the ground they lost. The men here say they are fighting for their homeland and for their families.

“We will stand here and fight for as long as we have to,” Capt. Massud Aziz Osman said. “We are fighting against everyone’s enemy.”

Like many here, Osman, a father of four, says that the Kurds have been left to fight alone, abandoned by the Iraqi army and offered only limited support by the U.S. and its allies.

“ISIS is the common enemy,” he says, “and anyone who isn’t here fighting them is without a god or a faith.”

But Kurdish officials say determination alone may not be enough to see this battle through. They have recently become more vocal — calling for increased aid from the international coalition.

I’ve had a number of guests on radio in recent weeks, examining this crisis from every angle more days than not. They are deeply and wholly committed to facing, naming, confronting and eliminating the greatest existential threat of our time.

Former Congressman Frank Wolf co-founded ‘The 21st Century Wilberforce Initiative‘, an actively committed, on the ground, front line organization giving voice to leaders of Christian leaders representing thousands of the faithful, which should be tenfold that number. They’re doing everything in their power to call for action, policy changes and humanitarian assistance to ensure freedom, protection and human dignity for Christians threatened by extinction in the ancient land of their birth. A group  of religious leaders they recently visited in Iraq lamented:

This is not just the end of Christianity but the end of our ethnicity who have lived here for thousands of years. We believe this is genocide.

Consider the brutal reality, not reported in most media:

The Islamic State’s desecration and destruction of historic sites of religious and cultural heritage is unprecedented in Iraq. In Mosul, IS has turned an 800-year-old house of worship into a place of torture. Another church in Mosul that has existed for 150 years is being utilized as a prison, and yet still another is serving as a weapons storehouse.

All of the religious and ethnic minorities in Iraq face this deplorable reality. Yezidis note that this is the 73rd intentional targeting of their community. What has changed with the Islamic State is the speed and scope by which these religious and ethnic communities are being decimated. The Nineveh Plains had been one of the last relatively safe havens for Christians, Yezidis, Shabak, Turkmen and other minority groups, but with the fall of Mosul and surrounding areas in the summer of 2014, Iraq’s minorities have no place to go and are nearing the precipice of total disappearance.

This is appalling, a shock to the senses, a call to action. Something frequent guest Nina Shea has been doing for a long time, reporting on the raw reality and calling for what must be done.

President Obama must acknowledge that ISIS has religious objectives, that its actions are not simply random acts of “extreme violence,” and that ISIS aims to make the region – and beyond– pure for Islam. Maybe then, America’s generals would recognize that Christian, as well as Yizidi, communities are prime targets for ISIS, that Kurdish militias need to be equipped and pressed to protect them and air strikes need to be more seriously deployed.

And how has the president responded?

With at least an apparently distinct lack of gravity and sense severity of the threat and necessary response.

In an interview on foreign policy, president Obama said something that prompted the questioner to ask how he thought the media covers terrorism, and whether they sometimes overstate the level of alarm people should have about terrorism. The president’s response was ‘Absolutely. If it bleeds, it leads.’