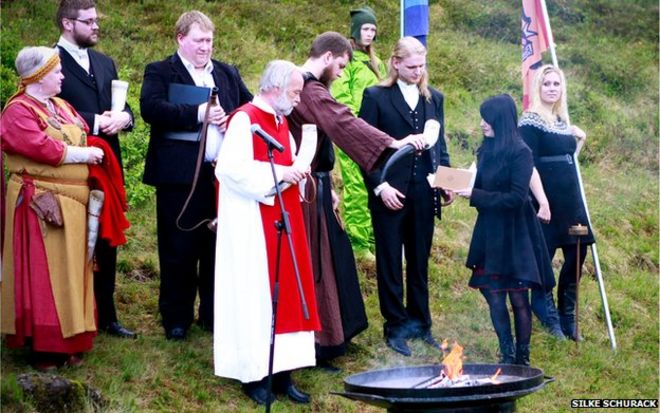 The pagan gods of Iceland were in the news earlier this year with the announcement that an Icelandic neo-pagan group plans to build a Norse temple, the first in a thousand years.  Hilmar Orn Hilmarsson, High Priest of the Asatru Association, gave voice to the significance of the occasion, stating “At last, our long journey across the desert is at an end.”

Icelandic neo-paganism is a little over forty years old, and despite evoking images of the Norse pantheon and Viking revelry, the movement is surprisingly modern in its outlook, preferring to interpret ancient mythology and cosmology as “poetic metaphors and a manifestation of the forces of nature and human psychology.”

As one report summarised, the movement is “non-authoritarian and decentralised, with no sacred text or official founder. Its philosophy promotes tolerance and individual liberty. It costs nothing to join and is open to all irrespective of race, cultural background, gender or sexuality.”

These qualities might seem less representative of an ancient religion than of the country’s  political character, with Hilmarrson noting “We don’t tend to be literal in our beliefs in Iceland, not even the Christian ones.”

Nonetheless, even this non-literal Icelandic neo-paganism captured global attention, since it plays to a familiar trope in the Western imagination of Christianity as the dull, staid, oppressive usurper of some ancient, organic, and somehow more meaningful precursor religion.

It is, for example, one of the more tedious customs of the recent Easter season to be solemnly informed, in person or through the media, of the pagan roots of this “supposedly” Christian celebration.  Did you know that “Easter” is named after a pagan goddess? This passive-aggressive revelation is usually transmitted with all the aplomb of one who knows a devastating secret that could bring down the established order and wreak delightful havoc among the safe, bourgeois lives of the God-fearing middle-classes.

Of course, outside of an insular Anglo-centrism most non-Germanic peoples are bereft of such titillation, with many a Paschal celebration no doubt disappointingly consistent with the Passover heritage explicitly confirmed and reiterated with every wish of “Joyeuses Pâques”, “Buona Pasqua” or else entirely elided with a “复活节快乐”, or “happy resurrection day”.

For some people, winking at “pagan roots” is just enough to impart a sense of having the inside knowledge, a real-life Dan Brown factoid sufficient to keep Christianity safely at arms-length, to hint at a more complex and mysterious past, a romantic and yet nebulous foil to the deeply ingrained messages and themes of our Christian heritage.  We can readily imagine some deep, earthy pagan heritage underlying and ready to overrun a seemingly banal Christianity.

It is human nature to want to know the inside story, the real meaning, the deeper answers.  Christianity itself excelled at depicting Christ and the Paschal mystery as the real meaning of its precedent Jewish tradition, and consistent with its universal scope, as the culmination and fulfilment of religious and salvific impulses across humanity.

A superficial over-familiarity with Christianity has brought us to a point where, ironically, the efforts of past evangelists are now tentatively reversed: is the worship of a fertility goddess a dim prefigurement of “new life” in the radical, supernatural sense of resurrection? Or is resurrection merely a mythic embellishment of a more natural celebration of human fertility?

If that last line doesn’t sound quite compelling in its own terms, perhaps it is because the appeal to “pagan roots” is itself parasitic on the existing religious culture.  Like a political protest party, or single-issue political movement, imagining paganism from the safety and familiarity of our post-Christian culture is only fun so long as we don’t have to take it too seriously, or expect it to provide a real alternative to the status quo.  Like a Renaissance fair, it might make for a good day out with the kids, but very few people want to live there.  Whether we’re playing at being medieval peasants or pagan Vikings, to be able to dabble in post-modern imaginings of dead religions is a luxury of the present age surely remote from the lived experience of our pagan forebears.

In the nominally majority-Lutheran country of Iceland, this neo-pagan movement represents part of a broader shift towards post-Christian religion. Western societies have tried, one step at a time, to detach themselves from the religious structures and traditions that once underpinned the social and political order. They have succeeded, to the extent that religion is no longer formally implicated in the operation of the state, nor socially mandated in the lives of its citizens. But it has yet to achieve the substitution of Christianity with an alternative religious vision.  Implicit in the development of a neo-paganism like Asatru is the possibility of a religion deemed more appropriate to the national character than Christianity – a religious heritage that can supplant Christianity as truly representative of the State, the people, and the culture of Iceland.

Yet if this is achieved, the novelty of romanticised neo-paganism will fade. It may be fun to consider wild and mysterious pagan alternatives to a stolid and familiar Christian heritage, but in making such comparisons we can hardly do justice to the old familiar religion of Christianity any more than we can do justice to the now forgotten and totally unfamiliar religions of paganism.  As the great British writer G.K. Chesterton put it: “the world has to thank [paganism] for many things which it considers common and necessary: and the creators of those common things ought really to have a place among the heroes of humanity. If we were at rest in a real paganism, instead of being restless in a rather irrational reaction from Christianity, we might pay some sort of pagan honour to these nameless makers of mankind.”

The Norse temple (if it is finally built) is in many ways reminiscent of Alain de Botton’s temple of Atheism, in that both are attempts to contrive a religious experience in overt distinction from a self-consciously Judeo-Christian culture.  It is hard to imagine such a temple truly capturing a religious spirit; more likely it would capture an Icelandic identity and a tourism market, along with Iceland’s already popular Sea Monster Museum and its Museum of Witchcraft and Sorcery.

Ultimately what this Norse temple represents for the West has more to do with modern secular liberal values than with the re-emergence of the Norse religion.  It might give voice to the imagined richness of our pre-Christian heritage, but the voice might sound a good deal thinner than we had hoped once the fantasies and allusions are spoken aloud and plain instead of in subtle hints and theatrical whispers.