“Humankind cannot bear very much reality”, T.S. Eliot wrote in “Four Quartets”. But only reality, however bleak, dignifies humankind. That is why we need revisionist historians who keep correcting our consoling and self-justifying narratives.

Two recent books have aroused controversy precisely because they set out to challenge versions of reality which have been the conventional wisdom for the past 50 or so years. One recounts how the man who has been acclaimed as the “Greatest Briton” who ever lived, carelessly sacrificed the lives of over one million Indians in the pursuit of victory in World War II. The book is Churchill’s Secret War by Madhusree Mukerjee.

Publishers Weekly describes this book as an important correction of the common picture of India as a “placid imperial bastion during WWII”. Rather,

India was in fact racked by famine and insurrection, according to this searching history. Mukerjee surveys a country seething with violence, as Congress Party militants agitating for independence turned to rioting and assassination campaigns after bloody police crackdowns, and an army of Indian guerrillas fought alongside the Japanese against the British.

The author’s centerpiece is a chronicle of the 1943 Bengali famine, in which at least 1.5 million died while British authorities continued exporting Indian grain. She blames the disaster on British policy, which, she argues, sought to extract as much war production and food as possible from India while printing money to pay for it; the resulting inflation priced food beyond the reach of the poor.

Mukerjee sets her well-researched chronicle amid heartbreaking scenes of starvation, bloodshed, and pungent portraits of Winston Churchill and his advisers as studies in racial disdain and deluded imperial nostalgia. This gripping account of a historical tragedy is a useful corrective to fashionable theories of benign imperial rule, arguing that a brutal rapaciousness was the very soul of the Raj.

The story does not make a great case for our capacity to learn our lessons from history. The descriptions of grain being shipped out of India while millions were dying of starvation makes it look like a re-run of the Great Famine in Ireland one hundred years earlier. British government policy then was locked in the prison of laissez faire economics and allowed merchants to ship grain out of Irish ports while people starved on a diet of grass and nettles.

Ramachandra Guha, author of India after Gandhi, writes of Mukerjee’s account: “Winston Churchill’s dislike of India and Indians has been known to scholars. But now, in Churchill’s Secret War, we have, for the first time, definitive evidence of how a great man’s prejudices contributed to one of the most deadly famines in modern history.”
Of course, any familiarity with history shows us quite clearly that the epithet “great” is one which has too readily been applied to any number of fatally flawed characters — from Alexander to Napoleon and beyond. 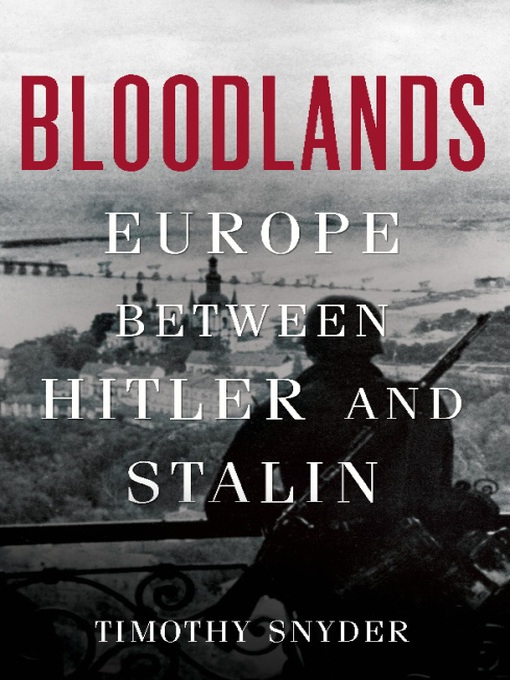 The other book revisits and revises the sad history of the eastern European lands lying between Germany and Russia. It has aroused anger because it dares to suggest that a narrative which recounts the slaughter of over 40 million souls is at least as deserving of a place in the collective memory as the contemporaneous extermination of 6 million souls in the Nazi concentration camps. This is Professor Professor Timothy Snyder’s Bloodlands, described by a writer in The Economist as “one of the most impressive books of history that I have ever read.”

But Snyder, Professor at Yale University, has his many critics. Efraim Zuroff of the Simon Wiesenthal Center accuses him of deflecting “the full measure of well-deserved blame from the major culprit of the Second World War … to provide a scholarly basis for the historically-inaccurate ‘double genocide’ theories, so prevalent recently in the post-communist world, which dangerously distort the history of the Second World War and the Holocaust.” For these critics there is only one genocide and all others must pale into insignificance when set beside it.

In fact, Snyder does not diminish the tragedy and uniqueness of the Holocaust. He only insists that we cannot lose sight of the larger picture. Between 1930 and 1945, in the area between central Poland and the Russian border, 14 million men, women and children were starved, shot and gassed to death, first by Stalin and then by Stalin and Hitler. The numbers are so vast that they numb our consciences.

Both these books, each revisionist in its own way, are doing an invaluable service to truth and to humankind. The reactions to both, however, show that humankind is often not just reluctant to bear reality but is also quite prepared to doctor descriptions of reality in ways which relieve the shame which confronting history arouses in us.

History writing is often the prerogative of the victors. Their stories must surely be taken with a pinch of salt. No safer is history written by the victims – and victimhood is a very respected condition in our time. The greatest enemy of historical truth is the complacent contemplation of our own good intentions and virtues. Unless we have the courage to also confront malice and vice, we construct myths and memorials to capable but flawed men, men who made terrible mistakes which cost millions of lives.

Does this mean that history is just about debunking great men? No. But we have to accept that great men, like the rest of us, are a mixture of goodness, nobility, weakness, stupidity and malignant prejudice. The pain of confronting reality should never be a reason for pretending that things were other than they were.

Michael Kirke is a freelance writer in Dublin.  He
blogs at Garvan Hill.