Two hundred years ago, on New Year’s Eve 1817, Scott published his latest smash hit, a fictional account of a real-life cattle thief or a freedom fighter, depending on your point of view, during the Jacobite rebellions of 1715. 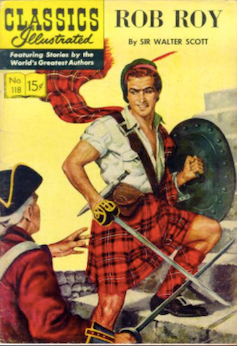 Rob Roy was a legend in his own lifetime and was soon turned into a flamboyant romantic figure in popular culture.Classics Illustrated

The huge print run of 10,000 copies was depleted within two weeks and two more editions came out within a year. A legend was born – or rather, reborn – for the story of Robert “Rob Roy” MacGregor had already spread across Europe in his own lifetime.

Even the author of his first major biography, The Highland Rogue (1723), which appeared while MacGregor enjoyed easeful retirement after decades of outlawry, conceded in the introduction that he was rehashing old news about Scotland’s very own Robin Hood.

A tradition of anti-heroes

It is a tale that speaks to a renewed interest in the lives and misadventures of anti-heroes. Han Solo and Chewbacca from Star Wars, Captain Jack Sparrow from Pirates of the Caribbean, and superheroes such as Iron Man and Ant Man are all unlikely warriors who end up fighting against the authorities.

Like Rob Roy, they are mostly thieves in some way, whereas more conventional heroes tend to adhere strictly to impossibly high moral standards that rankle against the practicalities of the modern world: Captain America, for example, is quite literally taken from the war-torn past to save an imperilled present.

The Jacobite Rob Roy agitates in the background to restore the House of Stuart to the British throne after the House of Hanover’s George I had succeeded Queen Anne. For the reader (or anyone watching the film versions) there is a vicarious thrill in championing the anti-hero, the reluctant rebel, the opportunist who overcomes an overwhelming threat.

It is not a romantic Tale that the Reader is here presented with, but a real History. Not the Adventures of a Robinson Crusoe, a Colonel Jack, or a Moll Flanders, but the Actions of the HIGHLAND ROGUE; a Man that has been too notorious to pass for a meer imaginary Person.

Invoking the names of fictional characters recently brought to life by the English novelist and spy Daniel Defoe, the unknown author of this London publication likens the real Rob Roy MacGregor to make-believe rogues, even in the act of presenting a so-called “real history”.

Wary of this sort of deadening material, Scott’s strategy in his own retelling was ingenious: his eponymous (anti)hero barely appears in the book. Rob Roy lurks in the shadows (like an 18th-century precursor to The Shadow, a popular comic-book vigilante from the 1930s) under different identities – Mr. Campbell, MacGregor, and Rob Roy – lending support when he can to the confused narrator of the story, the Englishman Frank Osbaldistone.

The savage as folk hero

Arguably, the little-seen Rob Roy is sidelined by his own wife Helen, a fearless character in the mould of Princess Leia (“Base dog, and son of a dog,” she says to Rob Roy’s sidekick Dougal, “do you dispute my commands?”). The spirited teenager Diana Vernon who hunts astride a horse as skilfully as any man – and with whom Osbaldistone becomes infatuated – is a similarly powerful and compelling figure.

That said, Scott falls back on the typical depiction of the Highlander as sub-human – a savage – rather than superhuman. Described in The Highland Rogue as uncommonly large and covered all over with matted tufts of red hair, the popular image of MacGregor has more in common with the oafish Little John than with the debonair Robin of Loxley in the old tale of Robin Hood and the Merry Men.

Scott’s English narrator similarly describes in detail what he calls the rogue’s “unearthly” appearance – the “thick, short, red hair, especially around his knees, which resembled … the limbs of a red-coloured Highland bull”. Here Rob Roy sounds more like Chewbacca than Han Solo, though he has the courage of both, and vividly captures the public’s imagination.

Many of Scott’s novels and narrative poems have been transferred to the stage and screen – none more so than Rob Roy. Isaac Pocock’s melodramatic play Rob Roy MacGregor or Auld Lang Syne (1818), for one, quickly attained the status of a national pageant, and was even performed before George IV on his famous visit to Edinburgh in 1822.

Part of the appeal of Scott’s novel lies in its vivid theatricality – in addition to Rob Roy’s intriguing appearances, his wife delivers compelling speeches, the gardener Fairservice and the magistrate Jarvie provide comic relief as caricatures of the working classes and landed gentry respectively, and the villainous Sir Rashleigh is dispatched with a bloody death scene. Dark pantomime indeed. 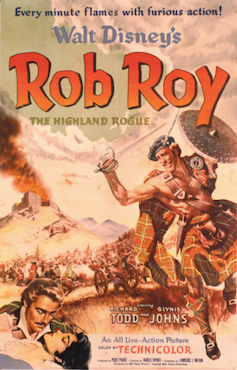 Produced by Walt Disney, the 1953 film version devotes most of its screen time to the exploits of its lead actor, Richard Todd, a heroic rebel who escapes by leaping a waterfall and storms a fort with his gang. Such films have provided – and extended – the Hollywood ideal of the plucky underdog.

More recently, Rob Roy (1995), starring Liam Neeson in the title role, has little to do with Scott’s novel, not least of all because it foregrounds the shadowy Jacobite as a handsome swashbuckler.

Scott’s character, meanwhile, better fits the current interest in the anti-hero – a dubious, charming half-human (or superhuman) that overcomes the enemy. Importantly, though, the supporting cast of characters (most notably the fearless wife Helen MacGregor, the determined youngster Diana Vernon, and Rob Roy’s loyal sidekick Dougal), also merit attention alongside the eponymous hero.

Outside of Scotland, perhaps, Rob Roy and his circle of valiant misfits hasn’t received the wider cultural exposure enjoyed by the medieval outlaw Robin Hood and his band of Merry Men. But, with Scott’s intervention, their stories – and personal failings – make them as compelling as any modern superhero.

Daniel Cook is Senior Lecturer in English at the University of Dundee. This article was originally published on The Conversation. Read the original article.