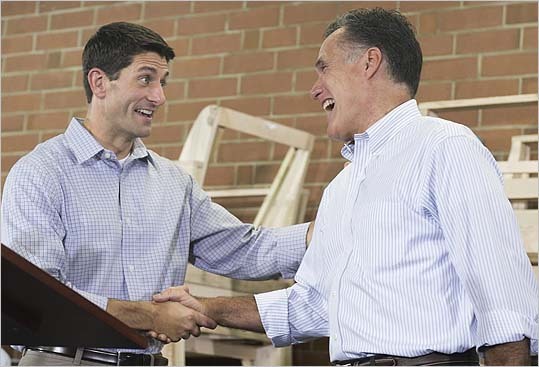 All of a sudden, it seems the media have noticed what the presidential election is actually all about. Ideas. Competing ideas. Two stark contrasts of opposing worldviews and what should be the proper size and role of government. It’s about time.

What was it about the choice of Congressman Paul Ryan that evoked this swift and sweeping response? His clarity, charity and honesty, seem to be the top answers of both supporters and opponents. I heard a Democratic strategist on a television news panel credit Ryan with being an intellectual, an honest man who clearly articulates and stands for what he believes and represents conservative values with weight and gravity rare at this level of politics. She just doesn’t happen to agree with his beliefs or politics, but she respects the man.

Not everyone who disagrees with Paul Ryan is so charitable, but many who do at least admit  he’s a charitable man and a formidable politician. He’s also consequential, because his elevation made media heavyweights suddenly aware that this election is about a clear choice.

Republican Mitt Romney reset the race for the presidency as a battle over the size and scope of the federal government Saturday, choosing as his running mate Rep. Paul Ryan of Wisconsin, the architect of the GOP’s plans to slash spending and overhaul Medicare.

In a risky and surprising move to give his campaign a jolt of momentum, Romney chose the 42-year-old congressman over several contenders considered safer bets. The selection seemed destined to shift the tone of a campaign that has become mired in petty squabbles and force a debate over how to tackle the nation’s fiscal challenges.

That was the tenor in most media stories. Including the Times.

Mitt Romney introduced Representative Paul D. Ryan of Wisconsin as his running mate on Saturday at a spirited rally in Norfolk, Va., bringing to his side one of the party’s young conservative leaders in a move that altered the contours of the campaign and sharpened the choice facing the voters in November…

The decision instantly made the campaign seem bigger and more consequential, with the size and role of the federal government squarely at the center of the debate.

I’ve been saying that for months. That exact thing. So much so that on Monday, my network re-aired my earlier interview with Cong. Ryan and I opened it with the remarks that this election is essentially about the proper size and role of government, whether it is a solution or the problem, and what Catholic social teaching tells us about governing a society.

Now, big media are leading most of their stories with those same question, except for Catholic social teaching, though that’s coming out in some of the reporting on Paul Ryan anyway. Especially when it comes to claims that he’s a disciple of Ayn Rand.

These Rand-related slams, Ryan says, are inaccurate and part of an effort on the left to paint him as a cold-hearted Objectivist. Ryan’s actual philosophy, as reported by my colleague, Brian Bolduc, couldn’t be further from the caricature. As a practicing Roman Catholic, Ryan says, his faith and moral values shape his politics as much as his belief in freedom and capitalism does.

“I, like millions of young people in America, read Rand’s novels when I was young. I enjoyed them,” Ryan says. “They spurred an interest in economics, in the Chicago School and Milton Friedman,” a subject he eventually studied as an undergraduate at Miami University in Ohio. “But it’s a big stretch to suggest that a person is therefore an Objectivist.”

“I reject her philosophy,” Ryan says firmly. “It’s an atheist philosophy. It reduces human interactions down to mere contracts and it is antithetical to my worldview. If somebody is going to try to paste a person’s view on epistemology to me, then give me Thomas Aquinas,” who believed that man needs divine help in the pursuit of knowledge. “Don’t give me Ayn Rand,” he says.

But detractors and especially the Catholic left won’t let him off the hook.

Which brings up a point I’m struck with as these first few days of Ryan’s elevation unfold. Really, truly struck with. People have written to me earnestly asking for answers about this, for either a defense or an indictment of Ryan based on anything he may have found worthwhile in Rand’s economic philosophy in the past, or anything he holds as worthy today in economic policy in advancing a budget that reforms the American economy.

One, it’s interesting to see how much energy is going into vetting the Republican vice-presidential nominee once again than ever was given to analyzing the Democratic presidential candidate for the second election in four years.

Two, it’s refreshing to see and hear so many people engage in a debate over ideas – about philosophy, politics, the economy, society and the common good – and argue them passionately. If we’re as much about equality as we believe we are, let’s apply the same scrutiny to any major candidate who changes beliefs or positions on issues. What is considered ‘evolving’ for one candidate is ridiculed as ‘flip-flopping’ for another. What’s heralded as enlightened for the one is sharply derided as disingenous for the other. Let’s be serious.

And three, let’s be informed. Instead of relying on media and punditry for interpretations and translations and representations of ‘the Ryan budget plan’, let’s read it for ourselves and see what it says. In the absence of a competing budget plan, it’s something to debate.

As Cong. Ryan told me, “we are facing the most predictable debt crisis in history.” And “the American people want to be talked to like adults,” to “form their own prudential judgments” about competing ideas. “Are we simply treating the symptoms or the root causes of poverty?” The government has a role to play, he added, but one that above all honors the dignity of the human person.

Elections are now under 90 days away, and the campaign has just become more serious and more interesting.