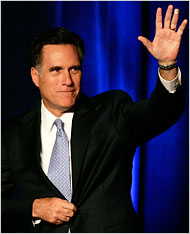 It
started as a buzz this morning throughout the media that Gov. Mitt
Romney would be dropping out of the race today at the major C-PAC
event, the Conservative Political Action Conference, the powerfully
influential summit of conservative leadership in America. When Romney
came to the podium to deliver his talk, the crowd went wild. This was
their man, evidently, and they stood to deliver a rousing encouragement
for him to carry on their principles and values.

Romney’s
address was energized and spirited and….better than most of his
campaign speeches, it seemed. It was purposeful and intent on the job
at hand the way Romney fixes his attention on the productive way to run
an organization. But the job at hand for him has changed for now, he said.

I will continue to stand for conservative principles; I will fight alongside you for all the things we believe in.

The C-PAC crowd, and many leading conservative thinkers, believed
Romney best stood for what they believe in. His speech only reaffirmed
that.

What is it about American culture that has led us to
become the most powerful nation in the history of the world? We believe
in hard work and education. We love opportunity: almost all of us are
immigrants or descendants of immigrants who came here for
opportunity-opportunity is in our DNA. Americans love God, and those
who don’t have faith, typically believe in something greater than
themselves-a “Purpose Driven Life.” And we sacrifice everything we
have, even our lives, for our families, our freedoms and our country.
The values and beliefs of the free American people are the source of
our nation’s strength and they always will be!
The threat to our culture comes from within. The 1960’s welfare
programs created a culture of poverty. Some think we won that battle
when we reformed welfare, but the liberals haven’t given up. At every
turn, they try to substitute government largesse for individual
responsibility. They fight to strip work requirements from welfare, to
put more people on Medicaid, and to remove more and more people from
having to pay any income tax whatsoever. Dependency is death to
initiative, risk-taking and opportunity. Dependency is a
culture-killing drug-we have got to fight it like the poison it is!

The attack on faith and religion is no less relentless.

Watching this live, you could feel the almost palpable despair that
this standard bearer of sorts is stepping down to join their ranks
instead of lead them. Though, they weren’t able to deliver enough
support to keep Romney in the race.

Interestingly, the media starting reporting immediately that Romney had “suspended” his candidacy, as if it were on hold.

John McCain effectively sealed the Republican
presidential nomination on Thursday as chief rival Mitt Romney
suspended his faltering presidential campaign. “I must now stand aside,
for our party and our country,” Romney told conservatives.

“If I fight on in my campaign, all the way to the convention, I
would forestall the launch of a national campaign and make it more
likely that Sen. Clinton or Obama would win. And in this time of war, I
simply cannot let my campaign, be a part of aiding a surrender to
terror,” …

There were shouts of astonishment, with some moans and others yelling, “No, No.”

Shock waves are rattling the media, both mainstream and conservative
talk radio. By the end of his show today, Rush Limbaugh said he had
probably received a record number of emails today from listeners, a
great many of them crushed and angry.

The anger is largely at Sen. John McCain, the party’s presumptive nominee at this point. His address to that crowd is next…