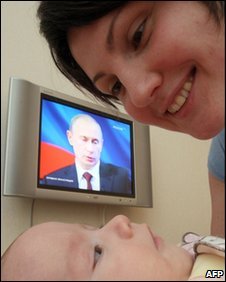 With a population of 141.9 million, Russia is registering a growth for the first time since 1995, says Prime Minister Vladimir Putin.
For the past five years the number of Russian deaths had declined,
while births had risen. Life-expectancy is about to reach the age of 69.

“We can say with a high degree of
confidence that Russia will register a growth in population for the
first time since 1995,” said Mr Putin at an end-of-year government
meeting broadcast on state television. A spokesman said that while the
total growth was a minuscule 20,000, it was a “symbolic” milestone.

Demographically things are still grim for
Russia. The native population actually declined by about 224,000 last
year. This is a lot better than the decline of 958,000 in 2000. The
population will probably remain stable because of immigration from
Central Asia and other former Soviet republics.

However, Mr Haub advises Russians not to celebrate yet. Things are going to get worse soon.

The number of young people moving up the
age ladder into the prime childbearing ages is much less than those now
in the childbearing years. As of January 1, 2009, there were 6.2
million females in the age group 20-24. The 15-19 age group was only
4.5 million and both the 5-9 and 10-14 age groups taken together
totaled 6.5 million. As those younger age groups begin childbearing,
births will certainly decline even if the TFR rises. Beyond that,
deaths will rise as the elderly population grows significantly in size.