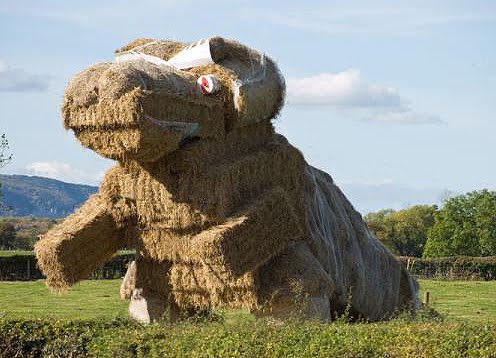 A “straw dog“ was a ceremonial object used in place of an actual dog in ancient Chinese sacrifices. Sacrificing a dog made from straw fulfils the requirements of ritual without the cost or the burden (or the mess) of killing an actual hound. A straw dog looks the part and plays its role, but no one really cares about its loss. It is form without substance, a placeholder without value.

This verse from theTaoist classic, the Dao De Jing, tells us that a sage should emulate Heaven and Earth in viewing the people as straw dogs, looking upon them with a ruthless (literally “not compassionate”) detachment. From a Western perspective this does not sound like sage advice. We appreciate above all else the primacy of the individual and the value of personal feelings. We are eminently empathic and easily won over by the emotional narratives of others. So in the debate over same-sex marriage, people have been greatly moved by the simple request that couples who love one another be allowed to express their love in “time-honoured tradition”, regardless of their sexual orientation.

“Marriage Equality” is being fought for not only on the grounds of justice, but on the grounds of compassion. Who among us has the will, let alone the right to deny marriage to people who love one another, and thereby imply that they are not worthy, or that their love is inferior? Who has the audacity to stand in the way of happiness for such ardent couples?

As one same-sex couple explained:

“We introduce each other as ‘my wife’ and don’t care what anyone else may think about us. We are honest citizens of Australia and will not allow the government to tell us who we can and cannot love and marry. We thank all the people who made our day special and who recognise and accept our union. You know who you are and we love you!”

The narrative of love and joy in the face of legal obstacles and discrimination is a common theme in the personal stories of same-sex marriage advocates:

“There was such an atmosphere of love, joy and fun. How could anyone say that’s wrong? Since moving back to Australia we have discovered how many different ways we encounter discrimination largely due to government policy and legislation.”

The emotional appeal of the same-sex marriage campaign can be summed up in the admonition that we should – above all else – show compassion to people who are merely striving, like ourselves, to find happiness in life.

The shadow of this compelling emotional appeal is the “Don’t be an ****” argument (with one less asterisk for our American readers), which convincingly demonstrates that only an **** would actively wish to get in the way of other people’s happiness. This argument can be persuasively implemented in the following way: “I have no problem with letting two people celebrate their love and commitment to one another with the same rights and privileges that the rest of us enjoy. Do you?”

The sage, ideally, is immune to emotional appeals. The degree of joy reported by participants in same-sex marriage does not in and of itself indicate the goodness or truth of their cause, any more than the allegedly greater happiness of religious believers indicates the truth of a religious faith. But “to him the people are but as straw dogs” isn’t just a fancy way of saying that the sage is not easily swayed by emotional appeals. What it means is that when he considers the “common people”, he sees the whole population as forms without substance. He doesn’t relate to them as one human to another. He sees their behaviour, their shape, their roles, but is not drawn to them on the normal level of human interaction. If he did, he would be pulled into the bickering and conflict like the rest of us: our daily concerns, our politics, our limited vision of what is necessary or beneficial.

As another Chinese anecdote explains:

When an archer is shooting for nothing, he has all his skill.
If he shoots for a brass buckle, he is already nervous.
If he shoots for a prize of gold, he goes blind or sees two targets —
He is out of his mind!
His skill has not changed. But the prize divides him.
He cares. He thinks more of winning than of shooting–
And the need to win drains him of power.

The meaning of seeing the people as straw dogs is therefore to avoid the kind of division and partiality that comes from caring for a cause, or seeking to win. If the sage takes up a cause he can no longer follow the Way of Heaven. If he strives to win, he is no longer being a sage. In our case, the moment we think about winning, our vision is narrowed to the field of battle and we miss the full truth of the situation.

The truth about the push for same-sex marriage is that our society is deeply divided. Regarding the people as straw dogs means looking impartially at the constituent elements of society and seeing that they include a minority who adhere to traditional marriage, a minority who actively push for “marriage equality”, and the vast majority who – to varying degrees – ignore the issue, are drawn in both directions, or are compromised by the long-term weakening of marriage.

The mere fact that this argument over the nature of marriage and sexual ethics now so fiercely consumes national political attention indicates a society suffering from “irreconcilable differences”. The hope that same-sex marriage can be defeated should be tempered by the recognition that marriage is already a rickety institution in this society. It is extremely unlikely that a political class which has historically supported the gradual dismantling of the marriage tradition will draw a line at same-sex marriage and somehow remain unmoved by the emotional pleas of its advocates. Even if such a victory is attained, how will it endure the continuing pressure for change in a context of increasing deviation from the ideal?

The present trajectory of our social morality merits the term decadence, meaning decay. Decay has only one direction and cannot easily be halted. The present push for same-sex marriage is not the cause, but merely the latest and most remarkable symptom of a decaying moral tradition. Indeed, the most remarkable aspect of same-sex marriage is, à la the curious incident of the dog in the night-time, that our present society does not find it particularly remarkable.

If decadence is indeed the problem then supporters of traditional marriage should take heart, for they know – or ought to know – the solution. Christians have a heritage in which their morality and their spirit made them aliens in the decadent cultures they inhabited. As the late second century apologetic piece Epistle to Diognetus proclaimed of the early Greek Christians:

“They live in their own countries, but only as aliens. They have a share in everything as citizens, and endure everything as foreigners. Every foreign land is their fatherland, and yet for them every fatherland is a foreign land. They marry, like everyone else, and they beget children, but they do not cast out their offspring. They share their board with each other, but not their marriage bed.”

The letter depicts a poor and despised people, who inhabit a paradoxical existence of persecution and love:

This strange principle by which the early Christians lived mirrors the words of the sage:

It is this principle that sets a moral minority apart from a decadent society, and gives them the strength and resilience to survive. From the straw dog perspective, it is the people strong enough in their convictions to embrace such a transformative teaching who will endure and grow even as the rest of society falls apart around them.

The political battle may be won or lost, but in either case our true priority must be the internal battle to live by this most difficult of principles.