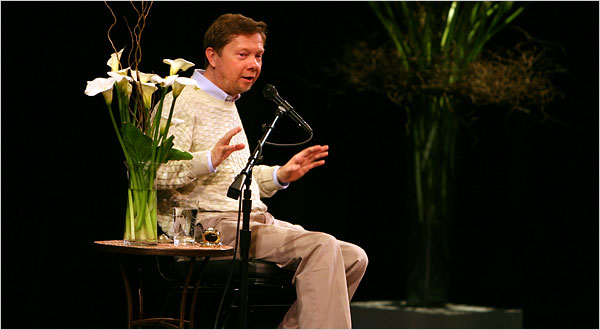 More than two million people logged on Oprah to watch Eckhart Tolle’s webinars on his latest book, A New Earth: Awakening to Your Life’s Purpose. His books, tapes and other DIY spiritual paraphernalia sell in the millions. Look in the New Age or self-help section, you’ll find them. On the back cover you may find a small picture of a figure oozing Yoda-like serenity. Who is this 60-year-old German, what does he say, and why is he so popular?

Eckhart Tolle teaches spiritual enlightenment. At 29, after a life of drifting and episodes of depression, a personal epiphany launched him onto the path of self-discovery. This eventually led to the creation of his own spirituality – a hybrid of Zen Buddhism and Hinduism, with a sprinkling of Christianity. (His real name is Ulrich Tolle, but he adopted the name of a mediaeval msytic.) This formula has resonated with Oprah, Meg Ryan and Cher, to name a few of the celebrities he has charmed.

If you want to be really happy, Mr Tolle says, live in the present moment. This is the only way to foil the ever-encroaching demands of an ego-based consciousness and to become aware that we are all conduits of the universal life force. A New Earth will come; we are on the verge of it already, when the chosen who live this awareness will bring about an evolutionary leap in human consciousness. Our destiny is to be absorbed into the grand scheme of the one life force, and we, or something like us, will all live happily every after.

Mr Tolle pleads with his readers to rid themselves of egocentric consciousness – much like the dissolution of the ego in Zen Buddhism. Isn’t this just old-fashioned humility? Well, yes. If we replace “egoic mind” or “ego identification” with “pride”, we are dealing with something like classical Christian notions. And he analyses this rather well: our games and double-dealing to protect our shabby little ego. Yes, he has real insight into what makes people tick at a purely functional level.

But, for Mr. Tolle, it would seem that pride, or “egoic mind” is the only enemy. Evil is an illusion springing from our “pain-body” as he calls it, our own personal and collective menagerie of egoic dysfunction. Ignorance is living while unconscious of our destiny to live with awareness. Positive moral acts are those that kill the ego and its domination. Personal responsibility is choosing to live in the “presence”, choosing a life of awareness and achieving salvation by helping the universal life force to realise itself through us.

Our destiny of absorption into the universal life force means that we are all God, but to varying degrees we have been corrupted by our ego. Disarm the ego by doing the “now” thing and your unhappiness will disappear.

To his credit, Mr. Tolle recognises the distinction between unhappiness and suffering. However, the role of suffering is merely to lessen the hold of the ego on external “form”, things that the ego grasps to maintain its dominion over us. I suggest that he might have a few difficulties understanding the suffering depicted in Mel Gibson’s The Passion of the Christ. But then again, don’t we all?

What this amounts to is an anemic parody of traditional Christianity. Mr. Tolle, like other New Agers, believes that the universe would be a much tidier place if we got rid of the idea of a personal God who wants me to become a fully actualised person, just like Himself. Don’t get me wrong – Mr. Tolle’s suggestion of being present in the here and now has merit – just read the 18th century classic, Abandonment to Divine Providence by Jean-Pierre De Caussade, for a Christian perspective. But it’s not a revolutionary spirituality. In fact, it is basically a revival of ancient gnosticism.

And why is A New Earth so popular?

Clearly it must answer a craving for genuine spirituality. People are crying out for meaning – and not just any meaning, but something that makes them get up in the morning.

To suggest meaninglessness as the foundation of reality sounds deep and insightful. Remember “The Answer to the Ultimate Question of Life, the Universe and Everything” in The Hitchhiker’s Guide to the Galaxy? It was “42”. But people are tired of a juvenile cynicism which tears down without building up. And they don’t find meaning they crave in science, the dominant discourse of our time. Faulty interpretations of science and philosophy often point to a meaningless universe powered by Darwinian determinism. As the 1979 Nobel laureate in physics, Steven Weinberg once quipped: “the more the universe seems comprehensible, the more it also seems pointless”. Consumerism and other avenues of satisfying our concupiscence point to nothing beyond themselves.

Where are people to look to make their lives worthwhile? Inside ourselves, say the New Age gurus. So Mr. Tolle has tapped into a market driven by psychological angst and distrust of traditional religion. By throwing together some snippets from Zen and Hindu traditions, along with a few shallow references to the Bible wrapped up in a generous dollop of personal opinion, Mr Tolle capitalises on baby-boomers’ anguished search for coherence and meaning.

The sad thing is that many good people will be desensitised or even inoculated against the real thing, just as junk food deadens the palate to gourmet cuisine.

Craig Smith is a research biologist in Hamilton, New Zealand.

none More by Craig Smith