Actually, nurse Jill Stanek was there when babies who survive
abortion attempts were left to die in a side room. Her testimony was
powerful enough to produce the ‘Born Alive Infants Protection Act’. And
she was there when Illinois Sen. Barack Obama refused to vote for that
act, and thus refused to provide protection for these babies.

No matter how politicians or activists spin it, here’s the truth.

To recap, then-state Sen. Barack Obama voted against the
Illinois Born Alive Infants Protection Act four times in three years,
from 2001 to 2003, and was the sole senator to speak against it on the
Senate floor twice.

Remaining on Obama’s campaign website to this day, in a section
boasting of his pro-abortion bona fides, is an ABC News story quoting
the Illinois Planned Parenthood CEO during that time: “[Pam] Sutherland
said Obama approached her … and worked with her and others in crafting
the strategy. …”

(Some of us followed it this earlier this year and reported on it. At the beginning of primary season.)

That’s the background. But the story has broken out into some
mainstream media lately, thanks to…Jill Stanek and others like her.

Like another woman who was there. One of those survivors of abortion.

Here she is today… 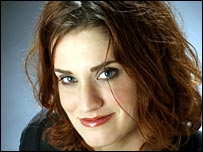 Her name is Gianna Jessen, in case you haven’t seen her in the news. She’s amazing.

Gianna was aborted in 1977 by infamous CA abortionist
Edward Allred, who is named on her birth certificate as her attending
physician. Gianna’s 17-year-old mother aborted her at 29-1/2 weeks’
gestation after belatedly deciding the time wasn’t right….

Gianna was externally and internally scalded [by a saline solution]
for 18 hours, but her mother’s bag of waters ruptured before Gianna
died, and Gianna was delivered kicking and squalling….

Were it up to Obama, Gianna would not be here.

Precisely, because of the language of the bill Obama refused to support.

“A live child born as a result of an abortion shall be fully
recognized as a human person and accorded immediate protection under
the law.”

Therefore, by carrying the logic through to its conclusion…

In Obama’s mind, Gianna was not a human person when born and not eligible for legal protection.

Hard to face, right? Not when there are campaign surrogates who can denounce this abortion survivor.

Why are they denouncing her? Because her story is featured in a new ad running in some states, and here.

And something has to be done, when the truth gets out.