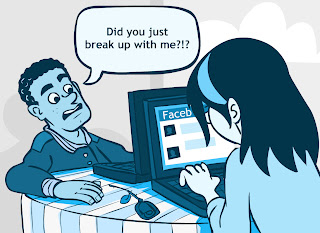 I’m inclined to think they should first be taught basic
table manners, and how to say “Please” and “Thank you” with consistency, but
that would make me seem hopelessly old-fashioned.

Recently some two hundred teens attended
a conference on “Facebook breakup etiquette.” The event was sponsored by
the Boston Public Health Commission (your tax dollars at work, America!).

“No one talks to young people about this aspect of
relationships,” Nicole Daley, one of the conference organizers, told me between
breakout sessions as teenagers swarmed a nearby cotton-candy stand. “We’re here
to change that.”

One of the pressing issues: the nuances of updating your FB “relationship” status to “single”:

“When I’m done with a relationship, I’m not going to wait a
day, an hour or even 10 minutes to update my status,” Roberto told the group.
“When it’s over, it’s over. I’m done with you.”

Sounds like the kind of guy I’d like my daughter to marry
one day—not. Thankfully, the brash Roberto was promptly dressed down, not only
by fellow attendees (mostly girls), but also by the adult organizers. This sort
of scenario, and many other behaviours, were debated and categorized as “healthy”
or “unhealthy”, including:

“posting mean/embarrassing statuses about your ex”
(unhealthy) and “rushing into a new ‘Facebook official’ relationship”
(understandable, but still not healthy).

Too bad they didn’t debate whether or not school-age dating
itself is healthy. I say not.

The whole problem with the dating scene as it currently
exists in most schools and western youth culture (besides the relationships
being intense, exclusive and prematurely sexual), is that it’s part of a trend,
sadly reinforced by adults, that serial monogamy is OK, even desirable, when
it’s not. In a nutshell, it normalizes the idea of frivolously entering
relationships which are simultaneously casual yet emotionally costly. This is
always a precarious undertaking, as it involves the human heart; it’s
potentially devastating when the players are also immature. When we adults allow
or encourage our children to be involved in intense, exclusive dating
relationships, we are essentially encouraging serial (or no) commitment; sexual
experimentation, easy divorce, etc. The NYT piece in part bears this out:

To help the youngsters envision what a healthy split might
look like, pictures and videos of several celebrity couples who managed
amicable breakups were projected onto a big screen. Justin Timberlake and
Cameron Diaz, for example, were heralded as healthy because “they’re still friends
and were able to co-star in a movie together.” Their parting was juxtaposed
with those of Kanye West and Amber Rose (West wrote a mean song about her) and
Sammi and Ronnie from “Jersey Shore” (Sammi supposedly defriended Ronnie’s
friends on her Facebook page), who each exhibited the kind of “unhealthy”
breakup behavior that the Boston Health Commission hopes Massachusetts young
people will rise above.

Have we given up on teaching teens how to have a healthy
marriage, and we have to resort to teaching them how to have healthy breakups?
Forget Facebook breakup etiquette: how about Basic Communication with Human
Beings 101? In other words: how to treat people—all people—with politeness,
courtesy, dignity, respect, and (when the time comes, for the right person),
lifelong love and commitment. You shouldn’t need a seminar for this. It should
be taught from infancy onward—first by the parents, but reinforced by teachers,
coaches, and other adult role models.

All hope is not lost. At the conference, there seemed to be
at least one voice of common sense, and it did not come from the adult
organizers.

At least one teenager … insisted that dating in high school
is for suckers. “Who needs the drama?” she said … “I’ve got enough problems
without some stupid boy breaking up with me on Facebook.”

If I didn’t know better, I’d think that was one of my
daughters talking.