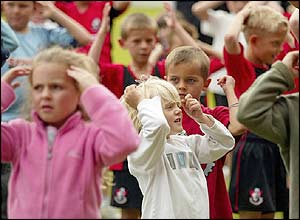 An old classroom game designed to raise alertness is
enjoying new popularity among educators as a way to foster and measure self
control in children.

Professor Megan McClelland of Oregon State University, an
expert on self-regulation in children, has been using a Simon Says-type game
with young children to show that the Head-Toes-Knee-Shoulder task can improve
their ability to listen, pay attention, follow through on a task and remember
instructions — things which predict academic achievement.

McClelland collaborated in a recent
study of 800 pre-schoolers (ages 3-6) in the United States, Taiwan, China
and South Korea.  The aim was to find out
if the Simon Says task would predict academic gains in countries already known
to have stronger self-regulation than in the US. It did.

“Beyond demographic variables or teacher’s
expectations, we found that the children in all the countries who performed
well on the task did significantly better in math, vocabulary and early
literacy,” McClelland said. “It shows that beyond cultural factors,
self-regulation is important for early academic success.”

The researchers have had similar results in Europe. And in
Oregon, especially among children from “lower-income” homes.

Professor McClelland, who has a $1.6 million grant from the
US Department of Education for this research, says there is “intense interest”
among educators in an easy to use method for assessing self-regulation among
children entering elementary school.

Perhaps because there are more children who don’t learn
self-control at home these days than in the past.