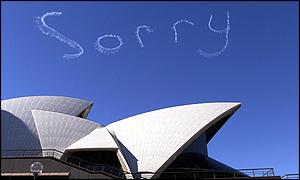 “Sorry
seems to be the hardest word”
sang Elton John in one of his early hits. But the new Australian
Prime Minister, Kevin Rudd, found it easy enough. As the first
official parliamentary act of his government last week, he apologised to his
Aboriginal countrymen in an eloquent and passionate speech. “For
the indignity and degradation… inflicted on a proud people and a
proud culture, we say sorry.”

Many of
Australia’s 500,000 Aborigines live in Fourth World conditions in a
First World country. Life expectancy for them is 17 years lower than
for the rest of Australia. The statistics for health, housing,
literacy, infant mortality and employment are appalling. Last year
the Federal Government spent A$3.8 billion on Aboriginal affairs and
had precious little to show for it. No big deal. Neither had its
predecessors.

Yet the
Prime Minister was not apologising for any of this. Nor was he
apologising for the theft of land, the murders, the discrimination,
the neglect of the past 200-odd years since European settlement.
Instead, he was apologising for wrecking Aboriginal families. An
estimated 50,000 of their children were removed from their families
between 1910 and 1970 – the so-called “Stolen Generation”. Rudd
called it
“one
of the darkest chapters in Australia’s history”.

A thick
1997 report, Bringing
Them Home, brought these stories to the attention of white Australians. As Rudd said, “There is something
terribly primal about these firsthand accounts. The pain is searing;
it screams from the pages. The hurt, the humiliation, the degradation
and the sheer brutality of the act of physically separating a mother
from her children is a deep assault on our senses and on our most
elemental humanity.”

The
Bringing
Them Home
report claimed
that
thousands of Aboriginal children were “stolen” – somewhere
between one in three and one in ten. Although this is asserted “with
confidence”, the margin of error is high, amazingly high, for a
government report. Rubbery figures like these set off alarm bells
with historian Keith Windschuttle, who has bedded himself down as one
of Australia’s least liked people for arguing
that
the issue has been fabricated by ideologically driven academics. His
counterclaim
is
that “Rather than being stolen from loving parents to fulfill a
nationalist policy of racist eugenics, the only cases where
Aboriginal children were removed involved serious parental neglect.
In many of these cases, the parents were alcoholics who were not
providing proper nutrition or health care and the authorities would
have been culpable had they not acted.” He plans to publish a
refutation of the whole “stolen generation” issue later this
year.

The Prime
Minister and most Australians ignored the historical controversy:
“Decency, human decency, universal human decency demands that the
nation now step forward to right an historical wrong.” He
issued an unqualified apology.

The problem is,
Aborigines have heard rhetoric like this before. Rudd’s precedessor
Bob Hawke created an Aboriginal and Torres Strait Islander Commission
in 1990 to deliver better social outcomes. It dissolved 15 years
later in a welter of corruption. In the best speech of his life,
Prime Minister Paul Keating said in 1994 that “we cannot resign
ourselves to failure” and promised justice within a decade.
Aborgines are still waiting. In fact, last year the Australian Army
surged into Outback towns to quash an epidemic of drunkenness and
sickening child sex abuse which is destroying remote Aboriginal
communities.

The
apology, however sincere and well deserved, diverts attention from
the cluelessness of government policy. Many Aborigines live in
physical and moral squalour which is unimaginable in the wealthy
coastal cities. One promising solution, proposed by Aboriginal
activist Noel Pearson, centres on restoring a sense of the dignity of
work and personal responsibility.

But an even more fundamental
issue is still being ignored: the disintegration of the Aboriginal
family. Yesterday’s bureaucrats tore families apart. Today’s are
tossing them in baths of acid. In the acres of newsprint about the
Prime Minister’s apology, two words were conspicuously absent:
“husband” and “wife”. There was a lot of windy talk about
Aboriginal families in newspapers, but they are not the families that
readers are used to, the kind that include husbands and wives. The Soviet Union effectively abolished marriage as a symbol of bourgeois oppression in the 1920s. That experiment didn’t work — and there is no reason to think that leaving Aborigines in a desolate no man’s land between traditional marriage and Western marriage is going to work either.

According to 2005 figures from
the Australian Bureau of Statistics, 86 percent of Aboriginal
children are born out of wedlock, that is, in neither a conventional
Western marriage nor in a traditional tribal marriage. And where the
stories of abused children, abused women, drunkenness and
pornography are most sickening, in the Northern Territory, the rate
is 95 percent.

Even more unsettling is the
fact that the father of 18 percent of Aboriginal births is
unacknowledged. Is it any wonder that infants are raped in a culture
where, as in the Northern Territory, in nearly half of all Aboriginal
births the father did not sign the birth certificate?

Admittedly, these statistics
might not be accurate. Many Aborigines in Outback communities speak
little English. They have very sophisticated notions of kinship
relations and marriage which cannot be translated into whitefella
questionnaires. But clearly something is terribly amiss – and the
whitefellas are turning a blind eye to whatever it is. One telltale
sign is that the 2002
National Aboriginal and Torres Strait Islander Social Survey
never mentions marriage or marital status. Apparently the 2008 survey
will be improved – more information about hunting, fishing and
gathering activities. This is not what Aboriginal people need.

There is an immense amount of
research which shows that marriage is associated with substantial
benefits in Western societies. Children do better on a wide range of
economic, social, educational, and emotional measures. They are far
less likely to be poor. They are far more likely to stay in school.
Their parents are happier, healthier, wealthier, and live longer. If
there is one single improvement which could be wished for the
Aboriginal people, it would be stable, intact marriages. And if there
were only one thing that Australian bureaucrats should be sorry for,
it would be stifling ideas on how to foster this.

The difficulties cannot be
underestimated. How can successful marriages be built in communities steeped in drunkenness, drug abuse, unemployment, and pornography. But you have to start somewhere. Dr Lara Wieland, a doctor who works in remote
Aboriginal communities in the far northern reaches of the state of
Queensland, insists that young Aboriginal parents at least need to be taught the
basics of parenting:

The dysfunction has become
so deep that many people do not even realise the damage that is being
done to their young people. They hardly bat an eyelid at events that
would make your stomach churn. A young mother in a drunken state
beats her young child with a stick and screams that she is going to
kill him. The next day, that same mother, sober, hugs her child and
does not even think about the lasting emotional scars. Why would she,
when her mother did the same to her, and her neighbours do the same,
and no one has ever told her that it is wrong?

“Children who have had
sexually transmitted diseases and have been raped and molested are
now parents. No one ever helped them or told them that what happened
to them was wrong or not normal. Today’s teenage parents grew up in
homes with hardly any furniture or toilet paper or soap or
toothpaste. They don’t know what it means to make your child wash
with soap in the shower or brush their teeth at night. They eat meals
that materialise — if they’re lucky — occasionally around pay day.”

The biggest stumbling block
may be the bureaucrats who are reluctant to impose Western values
like marriage upon Aboriginal communities. I suspect that Dr Wieland
knows a thing or two about their obtuseness. In 2003 she wrote a letter to the
Federal Prime Minister and the State Premier which revealed the
appalling state in which Aboriginal children were living. What
happened? She was fired.

Michael Cook is editor of
MercatorNet.