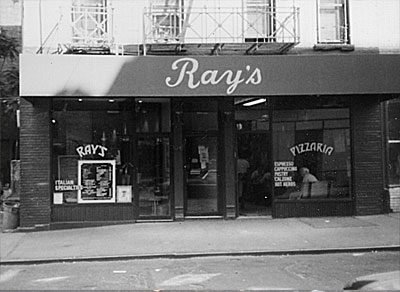 The local stationer and small bookstore in my village each closed years ago when the big office supply and book chains came in. Then the chains grew and forced more closures of more small businesses. Then, internet technology forced the bookstore chains to finally go under. And video rental stores followed.

So it’s nice to see stories like this get attention. I love Mom & Pop stores. The New York Times writer here must have a personal connection with this one, a local pizza shop with a history.

With appreciation for a writer who pours his heart out, here’s the lede:

It did not call itself the flagship Ray’s Pizza because it never really had a fleet. It was not Original Ray’s or Famous Ray’s or Original Famous Ray’s or Real Ray’s or Ray’s on Ice or any of the other cloned shops sprinkled like shredded mozzarella all over town. It was simply Ray’s Pizza, and in the great pizza wars of New York City, it was respected as having been the first, standing more or less above the fray at 27 Prince Street in Little Italy, with tree limbs holding up the basement ceiling and an owner whose name wasn’t even Ray.

And now, it seems, barring any surprises, Ray’s Pizza — the original that was so original it did not have the word “original” in its name — appears doomed to close at the end of the month.

No, say it ain’t so. I’m already hooked.

The closing, long story short, follows a legal dispute among heirs with various interests in the building at 27 Prince, which includes apartments and the two sides of Ray’s: the pizzeria and an Italian restaurant, each with its separate entrance, but sharing a kitchen and the corporation name, Ray’s of Prince Street. When the Ray in Ray’s, one of the owners of the building, died in 2008, a row arose over whether the restaurant’s lease was valid and whether it should pay rent. A lawsuit was filed in 2009 and settled this year.

Now Ray’s Pizza is moving out amid a lot of head-shakes and shrugs and what-are-you-gonna-do Little Italy resignation.

You could say Ray’s on Prince Street kept to itself, perfectly content with its place in the constellation where others burned brighter. Just a block away, tourists line up on the sidewalk for a seat in Lombardi’s, waiting for a hostess wearing a microphone headset to call their names from loudspeakers. Wait for a pizza? This was not the Ray’s way, where pies come whole or by the slice, hot from the oven, enjoyed without hurry in a humble booth beneath a hand-painted “Ray’s Gourmet Pizza” board.

This was on the front page of the Times. It’s personal.

So at this point I’m wanting to go to Ray’s, and hoping the story ends with a new chance for survival.

Who knows what that exposure did for Ray’s. But the story ends with a surprising new hook.

Family disputes aside, the sad fact is that the 2011 version of Little Italy with its five-figure commercial rents is not designed in the interests of mom-and-pop pizza parlors that people come there expecting to see. But Ms. Mistretta remains hopeful that something will come along in the weeks ahead. Ray’s will remain open through the Feast of San Gennaro, which began on Thursday and ends Sept. 25. After that, who knows?

Wait. They’re dedicated to staying through what amounts to a novena to St. Januarius, known and celebrated by Italians as the famous and beloved San Gennaro. Whose feast day is Monday, September 19th. Who is known for many miracles.