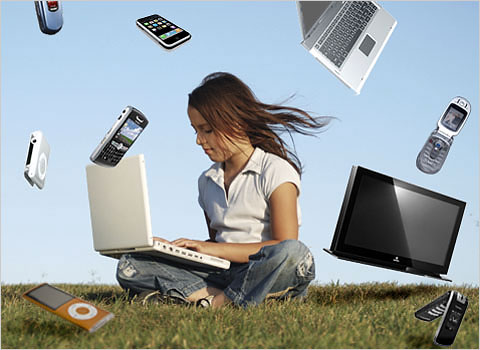 People of my age often say “Kids are so much smarter these days than we were.  They know so many things that we didn’t.”

They do know more “things,” just because they have the new media.  But that sort of knowledge is all breadth, with no depth.

Imagine trying to see one thing closely with lights strobing and flashbulbs popping in every square inch of the visual field.

Imagine trying to hear one thing clearly with a brass band, a symphony orchestra, a gong, an industrial metal crusher, a pack of barking dogs, and half dozen dueling drum soloists all making sound at one time.

Imagine trying to take a clean breath in a mudslide.

God help them, it’s like that for them all the time.

Young people in the mudslide are slower at reading, and they lose interest more quickly when they do put their hands to a book.  They are less well equipped to evaluate their own opinions, and more likely to conform to the attitudes of their immediate social group.  They display less ability to follow a logical argument, and they are less inclined to think that arguments matter in the first place.

They do have an enormous intellectual capacity – unformed, of course, as in every generation.  The great thing is to form it, not to shatter it.

The trailer for Professor Budziszewski’s book, Commentary on Thomas Aquinas’s Treatise on Law, is here. The book is now out in paperback.