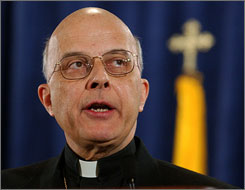 There’s been plenty of controversy around the issue of ’social justice’ in political news lately, which is only catching up with the longstanding controversy surrounding it in the Church world. I’ve written and spoken many times about the false dichotomy between the ‘peace and social justice crowd’ and the ‘pro-life crowd’ in the Church, as if there’s an either/or distinction instead of both/and.

Cardinal Francis George seems to be in the thick of it with controversies as one of the (if not ‘the’) pre-eminent American prelates. He’s president of the US bishops conference, a job laden with responsibilities like engaging politicians and presidents over social policies and their adherence to the moral law on which this country was founded, the one that recognizes the sanctity and dignity of all human life as the foundation for all other rights. He’s the Archbishop of Chicago and has taken heat from all sides at different times for a decision (or lack of one) groups of Catholics and even the press have criticized. Sometimes those controversies involved Rev. Michael Pfleger, and that was the case again this week, when the cardinal honored him at a peace and social justice award ceremony.

The award ceremony took place on April 7th, and the next day Cardinal Francis George’s address was posted on the Archdiocese of Chicago’s website. Here is Cardinal George’s reflection delivered at the’ Dr. King Prayer Service and Racial Justice Awards.’

“For it was by hope that we were saved; but if we see what we hope for, then it is not really hope.  But if we hope for what we do not see, we wait for it with patience.”

How can we see something not yet here?  We must look with eyes filled with love.  “Because we know that in all things, God works for good with those who love him, who are called according to his purpose.”

If we look with eyes filled with God’s love, then we see all those whom he loves, for God’s love is universal.  Those who give themselves to working for racial justice in the Church and the world dedicate themselves to seeing that the reach of God’s love is reflected in the way we treat each other across racial and cultural divides.  The temptation can be to work for justice apart from love, but then justice becomes itself a formula for oppression.  Justice without love is destructive, as Marxist societies, founded on equality and social justice alone, teach the world.

The awardees this evening are here because they love beyond racial and cultural divides.  This is true for all—for Bishop Perry, Michael Rabbitt, Elena Segura, Sr. Kathleen Tait, Phyllis Winter—and also for Fr. Michael Pfleger.  If the list did not include Fr. Pfleger, I would hazard to guess that the media interest tonight would be much reduced.  Fr. Pfleger has been a controversialist; and controversy is easier to report on than is love.  Fr. Plfeger has spoken in anger, sometimes unjustly or uncharitably; and anger is easier to capture on the camera than is love.  But Fr. Pfleger is a Catholic priest and a pastor, and in that capacity, like all good priests and pastors, he acts out of love.  Ask his people.  Ask the sick he has visited and the dying he has attended.  Ask the troubled he has consoled.  Ask the young people he has counseled and the school children he has supported.

As part of his ministry for racial justice, Fr. Pfleger has addressed killing, for killing is not an act of love.  We are surrounded by killing on the streets and in the schools, by violence in homes and by abortion that kills a child in its mother’s womb.  The killing of the unborn is obviously a racial justice issue when disproportionately those killed before birth come from families of racial minorities.  Abortion kills.  It kills an unborn child, and it often kills a mother’s spirit.  It kills a society that embraces it as a personal right.  Abortion kills social and racial justice.

Because they love God and all God’s people, those honored tonight are signs of hope for all of us.  I congratulate them and thank them.