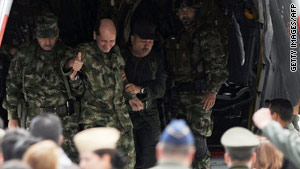 Draw your own conclusion.

The circumstances were dramatic.

Sergeant Luis Alberto Erazo Mayo, the sole survivor of the recent massacre of four hostages by a Colombian rebel group, said he prayed for his kidnappers during his captivity.

“God exists,” Erazo told reporters, adding that the only hope that sustained him during his ordeal was prayer. Among the few items he brought home in the backpack he made in the jungle was a daily missal.

“I prayed even for the rebels,” he said.

Colombian newspaper El Tiempo reported that Erazo had been kidnapped for more than eleven years by the rebel group FARC, who injured him as he escaped on Nov. 26 during an attempted military rescue.

More than eleven years this man was held by FARC in the jungle. This is an amazing story.

Look carefully at the account of what happened in that attempted military rescue. He was shot, but kept running where instincts led him.

“The rebels told me that if there was any combat that we should run alongside of them because they were going to hand us over,” he added. “I forgot that and I ran towards the jungle. My companions went towards them however, and that is when they killed them at point blank.”

Despite his wounds, Erazo kept running as fast as he could and eventually hid in a tree trunk where he stayed for almost eight hours—until he was convinced that the voices he heard were those of Colombian soldiers.

“In a large field I saw some men in uniforms riding motorbikes. When I saw one guy with a helmet and night-vision goggles, I knew they were soldiers and I walked out. They hugged me and wouldn’t let go, they welcomed me back,” Erazo said in tears.

You can feel the human triumph of the moment, for everyone.

Erazo has been able to see his two daughters in his hometown of Narino and learned that he is now a grandfather. His mother told him the parrot and geese he left behind are still alive and are waiting for him.

What a perfect ending. And a sweet beginning.

When I saw the headline of this story I instantly recalled the rescue of  another group of hostages, and the faith and prayer of Ingrid Betancourt.