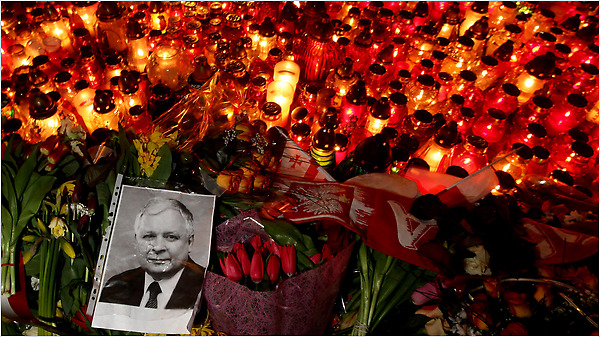 It is a particular kind of tragedy for a nation to lose a leader in a singular event, as in the assassination of John F Kennedy; another to lose thousands of citizens in acts of war, as in the attacks of 11 September 2001. But the plane-crash on 10 April 2010 that led to the death of ninety-four members of the Polish political elite in a forest near Smolensk airport in Russia belongs to a yet different order.

This is an event whose prologue took place in April 1940, months after the double-invasion of Poland by the Nazi and the Soviet armies. The Soviet secret-police’s execution of some 22,000 Polish officers and intellectuals in Katyn forest – outside Smolensk – was for years covered in evasion and blamed on the Nazis. For five decades, until Mikhail Gorbachev’s admission in 1990 of the NKVD’s responsibility, Poles had to live with a double-pain: knowledge of a historic atrocity that had decapitated its educated elite, compounded by the enduring official denial of the real perpetrators (a denial in which western states were shamefully complicit). Even after Gorbachev’s statement, many questions of accountability and justice remained.

The Polish contingent flying to Katyn – including Poland’s president, Lech Kaczynski, and his wife Maria – were due to attend a ceremony that marked the seventieth anniversary of the massacre. This would have been an act of commemoration and healing, part of a gradual but perceptible process leading towards final resolution. Instead, the anniversary has brought Poland to this almost unthinkable tragedy.

All of Poland is staggered by the gravity of the catastrophe. Everyone, irrespective of the political divides which have been tearing apart the society for the past two democratic decades, is united by a deep grief.

Yet after the initial shock has been registered, behind the scenes everyone is asking an unavoidable question: what were the causes of a crash which has  beheaded the Polish state?

It seems clear that there was no particular problem with the plane. True, this Russian-made TU-154 was older than comparable Boeing or Airbus craft, and had flown in the service of the Polish government since 1972; but it was carefully serviced and in good condition.

Moreover, the military airport at Smolensk – which is opened only for special occasions – had safely organised the arrival of Poland’s prime minister Donald Tusk on 7 April 2010 to attend a ceremony with his Russian counterpart Vladimir Putin, in what became a moving and symbolic step towards Polish-Russian reconciliation. At the same time, the airport was not equipped with the ILS system that allows planes to land in the kind of fog that blanketed the ground around Smolensk at the time of the flight.

These technical and weather conditions may have contributed to the catastrophe; but were not themselves sufficient to cause it. Here the considerations turn to the possible more human ingredients of the disaster, such as the speculation that Lech Kaczynski’s urgent desire to attend the Katyn ceremony – and awareness that his political arch-rival Donald Tusk had already  in a high-profile event at Katyn three days earlier – might have led him to underplay considerations of safety during the trip.

It is relevant here that President Kaczynski’s trip was not an official presidential visit to Russia, but a purely Polish event marking a national anniversary on Russian soil. The agreement over its form was reached only after months of his prolonged insistence, which included the presence of a substantial, respectable entourage: members of the Sejm (parliament), the military chiefs-of-staff, ministers, diplomats, and prominent public figures.

There is a possible precedent, in the events of 12 August 2008 – the sixth (and it transpired final) day of the short, nasty Russia-Georgia war. Along with the presidents of Latvia, Lithuania, Estonia, and Ukraine, Lech Kaczynski – whose foreign-policy outlook was characterised by suspicion of and hostility towards Russia – flew to Tbilisi in order to express his support for the stance of Mikheil Saakashvili. On that occasion, he demanded that the pilot ignore the threat of ground-fire from Russian forces and land directly in Tbilisi; the pilot refused, and chose to land in Azerbaijan. A row ensued, but the pilot did not yield.

In the foggy conditions of 10 April 2010, a diversion of the Polish plane to Moscow or Minsk (Belarus) would have been reasonable – though such a decision would have meant an arrival at Katyn very late for the scheduled ceremony. At present, however, any speculation that in this case there was pressure on the pilot to disregard advice not to land in Smolensk remains just that; it must be hoped that the plane’s black-boxes tell the whole story.

The poignancy of this moment in Polish history is accentuated by both the reputation its flyers and the precedence of tragedy. The Polish pilots of Britain’s famous Royal Air Force Division 303 won great renown for their extraordinary role in combating the Luftwaffe’s air-raids during the pivotal battle of Britain in 1940. The experience is the source of a popular saying that Polish pilots are so good that could fly onto a barn-door. The image seemed borne out by an incident in December 2003 in which a brave and experienced pilot’s expert handling of a helicopter-crash saved the life of the former prime minister Leszek Miller.

But on 23 January 2008, the crash of a reliable Spanish-made military plane (CASA C-295M) while approaching an airfield in the northwest Polish town of Miroslawiec did result in the Polish state suffering a terrible loss of life. All twenty people on board died: four crew and sixteen high-ranking officers of the Polish air force (who were returning from a conference devoted to air-traffic security).

The judgment must be that Polish officialdom has not learned the lesson of this recent tragedy. Indeed, there is a suggestion of grave irresponsibility surrounding this ill-fated trip. The fact that so many people of senior rank were loaded onto a single plane created evident risks and ignored the procedural rule that the president should not travel with others who occupy high state positions.

There is something else. Polish politicians, as do those in most democratic countries, live in mortal fear of the media and the opposition. For years some of them have mumbled about the necessity of upgrading the government’s air-fleet; but no decision was made, for fear of the response that state officials wish to enjoy the luxuries of new planes at the expense of impoverished taxpayers. Yet leading figures across the political spectrum had no qualms about spending over $1 billion to buy forty-eight F-16 fighter-planes on the grounds that this purchase would be seen as a proof of their concern for Polish security – planes which, for all their sophistication, are mostly grounded in Poland and largely useless. They did not dare to spend a fraction of this sum to secure the safe transport of the government itself.

One thing that has become strikingly clear in the aftermath of this disaster is the extent to which the Russian people themselves feel sorrow for this Polish tragedy. That has not stopped a few Polish commentators on websites pulling out the predictable suggestions that the event was engineered by the Kremlin. Conspiracy theories seem by now to be a permanent feature of the human discourse, and they can do nothing to help in the improvement of Polish-Russian relations.

We share the grief of this terrible event. But we also feel angry that a democratic state might have done such damage to itself through the irresponsibility or recklessness of its own officials.