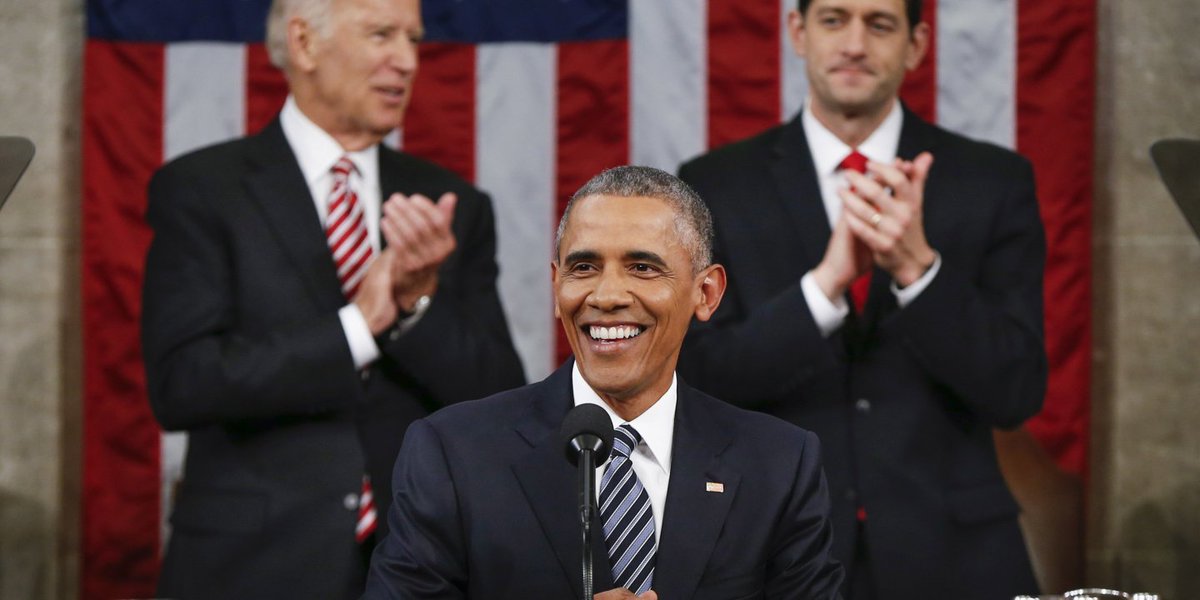 The annual State of the Union address is not an occasion for rhetorical fireworks. Most often it is an exercise in gilding the lily of the incumbent President’s record.

Still, I had hoped for more from a man of Barack Obama’s splendid oratorical gifts. The well of magic which made his early speeches so intellectually and emotionally rousing seems to have run dry. The Sunday sermon rhythms and rich texture of his historical references have become rhetorical gingerbread.

Most politicians traffic in self-serving bluster, but Obama’s early speeches – even if you disagreed profoundly with his conclusions – left you thinking: here is a man who can see both sides of the argument, who respects his opponents’ sincere convictions.

Nothing illustrates the President’s decline better than his double standards on what he described as “maybe the most important thing I want to say tonight”.

He lamented the fact that it is becoming harder and harder to have “rational, constructive debates”. American politics is broken and has to be fixed. “It’s one of the few regrets of my presidency — that the rancor and suspicion between the parties has gotten worse instead of better,” he said. Hey, Donald Trump and Ted Cruz! Are you listening?

Civility is essential for American politics to function properly, he reminded his listeners:

But democracy does require basic bonds of trust between its citizens. It doesn’t work if we think the people who disagree with us are all motivated by malice, or that our political opponents are unpatriotic. Democracy grinds to a halt without a willingness to compromise; or when even basic facts are contested, and we listen only to those who agree with us. Our public life withers when only the most extreme voices get attention. Most of all, democracy breaks down when the average person feels their voice doesn’t matter; that the system is rigged in favor of the rich or the powerful or some narrow interest.

There is much sound sense here, but not much consistency. Too many average persons feel that their voices don’t matter to the Obama administration.

Obama is just as steeped in rancor and suspicion as his Republican opponents. True, he’s not as boorish as Donald Trump (“the poo-throwing simian alpha male candidate, according to David Bernstein, in the Washington Post), or as aggressive as Ted Cruz (“brutal, fear-driven, apocalypse-based”, according to David Brooks in the New York Times). Obama’s style is to snub the opposition, to give them the cold shoulder, and stick in the rapier.

Which is more or less what happened when his Administration gave same-sex marriage its full support and ignored the millions of Americans who felt disenfranchised by the Supreme Court’s decision in Obergefell v. Hodges legalising it. It is astonishing that he failed to mention the most controversial and potentially the most significant domestic issue of 2015.

And then he poured salt in the wound by treating homosexuality as a courageous moral choice in the State of the Union speech. He invoked a phrase from Dr Martin Luther King Jr’s Nobel Prize acceptance speech to describe America’s finest qualities, “unarmed truth and unconditional love” and applied it to an adolescent who has decided to come out: “It’s the son who finds the courage to come out as who he is, and the father whose love for that son overrides everything he’s been taught.”

It’s simply dishonest to ignore evidence that life as a homosexual is sadder, sicker and shorter. It’s a kick in the guts to glibly assume that the moral standards which guided Americans for generations have to be poured down the sink like a carton of milk past its use-by date.

Obama ought to know that democracy doesn’t work if he thinks the people who disagree with him are all motivated by stupidity, or that his political opponents are homophobes. If he wants to identify who is responsible for breaking the bonds of trust in American politics, I’d suggest that he start by looking in the mirror.