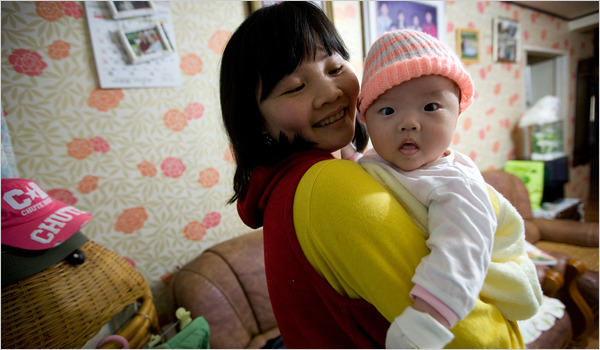 With the world’s second-lowest birth rate and a gender imbalance to boot because of sex-selective abortions, South Korean men are going overseas to find brides. The growing number of mixed marriages is creating worrying social problems for the goverrnment. According to the New York Times, hundreds of thousands of women have migrated in recent years, mostly to marry men in rural areas. Most of them come from China, Thailand, Vietnam and the Philippines.

That is only about 1 percent of the approximately 12 million children in South Korea under the age of 19. But if marriages to foreigners continue to increase at their current rate — they accounted for 11 percent of all marriages here last year — more than one in nine children could be of mixed background by 2020, demographic researchers say. The trend is even more pronounced in rural areas, where most of these marriages take place. Among farming households, 49 percent of all children will be multicultural by 2020, according to the Agricultural Ministry.

Sociologists and policy makers worry that mixed-race children will not fit into Korea’s homogeneous society. Although the influx of foreign women began only a few years ago,it is becoming clear that there will be some strains. The dropout rate of mixed-race children from elementary school is 15.4%, 22 times the national average. This happens because their mothers are not confidently literate in Korean and cannot push the children at school. The children are also more likely to be bullied at school and victims of domestic abuse. The government has responded by setting up 119 multicultural family support centers in the past three years which offer tuition and vocational training. ~ New York Times, Nov 28