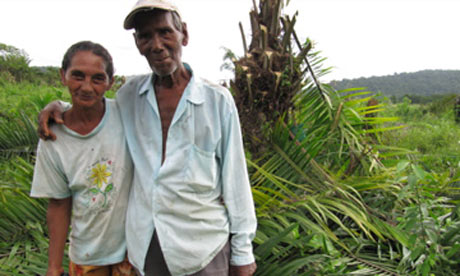 Since 2002 Goggel, a film producer and heir to a dairy fortune, has been offering nine-acre plots rent-free to poor peasants who agree to be sterilised, the LA Times reports. He pays for all the surgical procedures, and has led by example: the 61-year-old father of two had a vasectomy 10 years ago. So far, however, only 46 couples, the majority with three or four children, have taken up his offer, and his goal of providing a model for other landowners and even the government has come to nothing.

“We’re trying to give the country an idea how to approach the problem, hoping for a snowball effect,” Goggel said. “But most people don’t see the planet is doomed. They are face down in their own bowl of soup and can’t see any farther.”

Goggel, whose late father emigrated from Switzerland and founded the Alpina dairy company near Bogota in 1945, only discovered the grinding poverty in which landless sharecroppers and day labourers eke out an existence when he first tried to set up an ecological reserve near Abibe in northern Colombia. His animals kept disappearing because the people were eating them.

He insists that their poverty and misery is directly proportional to the size of peasant families. Colombia’s has a birthrate of 20.6 annual births per 1,000 inhabitants, just above the relatively high Latin American average of 19.1, according to this LA Times story; the CIA World Factbook gives Colombia’s rate as 18.09. Which suggests, at least, that it is still coming down. In fact the TFR is 2.22 births per woman, compared with the USA’s 2.05.

But, as local public health professor, Gloria Garay, points out, reducing the birth rate has not reduced poverty:

“It’s not just individual behavior but also social policy that sometimes keeps us from maintaining conditions of human dignity,” said Garay, who is with the National University of Colombia in the capital, Bogota. “Keep in mind that as much as we’ve reduced the birthrate in recent decades, half the country still lives in poverty.”

And, as we have come to expect with programmes to reduce the birth rate, they also produce a counter-effect:

“This is causing alarm, above all because the girls are getting pregnant despite knowing all the consequences that early maternity brings,” said Garay, who maintains that sex education has improved in recent years.

Meanwhile Goggel’s philanthropy only goes so far: his foundation does not give land outright to families because he does not trust them not to sell the land and revert to their “rootless lifestyles”, if not their procreative habits.

It is hard to escape the impression that Erwin Goggle, a self-described former Maoist, is a half-hearted social reformer, with his real interest in “the planet” and natural ecology.