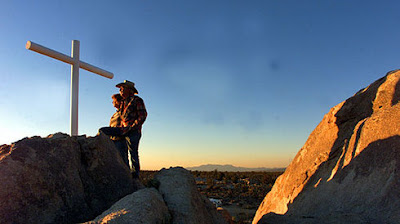 Recently, the Supreme Court ruled that the Mojave Desert war memorial cross stays, overturning claims by an anti-Christians that its presence gave offense and (beating the drum with a hole in it again), that it violated the church/state separation clause. The Court’s corrective should have put an end to that dispute.

“The goal of avoiding governmental endorsement does not require eradication of all religious symbols in the public realm,” wrote Justice Anthony Kennedy. “This cross,” he wrote, “evokes thousands of small crosses in foreign fields marking the graves of Americans who fell in battles.”

So since the agitator lost in court, someone decided to take it in their own hands. Literally.

Investigators who arrived at its former perch Monday found a few bits of rusty metal, 1.6 million acres of desert and a big mystery on their hands.

“One day it was there, the next day it wasn’t,” said Linda Slater, spokeswoman for the Mojave National Preserve, where the cross stood for 76 years. “It was bolted directly to the rock, and the bolts were cut. Someone has that cross.”

What did they prove by stealing it? And what will be the consequences?

Intended as a memorial to soldiers who died in World War I, the cross stood atop Sunrise Rock along remote Cima Road since 1934. For the last decade it sparked court battles over whether a solitary religious symbol should be allowed on public land.

But despite the legal arguments, the heist prompted outrage and condemnation on both sides of the debate…

Thomas Tradewell Sr., the national commander of the Veterans of Foreign Wars, which placed the original cross, said those responsible would be caught.

“This was a legal fight that a vandal just made personal to 50 million veterans, military personnel and their families,” Tradewell said. “To think anyone can rationalize the desecration of a war memorial is sickening, and for them to believe they won’t be apprehended is very naive.”

The VFW has offered a $25,000 reward for information leading to the arrest and conviction of those responsible.

The National Park Service is working with the Justice Department to track the criminals down. Shouldn’t take long. They’re carrying a heavy cross…