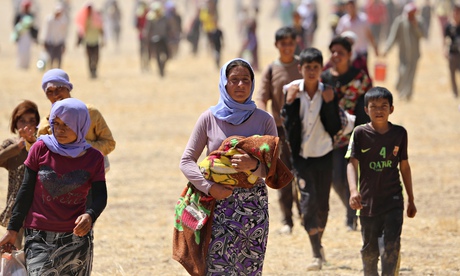 We have to know the enemy we’re confronting. How close are we to that task?

The president finally steps up to act. There are at least as many questions about what he says as shows of support for it.

The beheadings of two U.S. captives by Islamic State have steeled lawmakers to the need for more military action, and both Democratic and Republican congressional leaders were supportive of Obama’s plan on Wednesday.

But some Republicans in particular say they want more information from the administration about its wider strategy to combat global terrorism, and many would prefer a broad vote rather than one focused on funding.

Democrats are crossing the aisle again, this time as they voice strong support for attacking Islamic State, though the overwhelming majority of lawmakers from both parties oppose the idea of sending in any U.S. ground troops…

The White House has said Obama does not believe he needs Congress’ formal authorization to attack Islamic State.

And therein lies another problem.

Obama flatly said–sure, in the midst of saying he has already won congressional support for doing this (war against ISIL)–that he has the authority to do this. Period.

This reflects Obama’s contempt for all matters constitutional. He consistently abdicates his responsibility to use occasions like this to remind and inform the public about the constitutional issues involved. Now, I think he does have the authority to do this, but he needs to explain why…

I want a president who openly says, “Look, here’s a law on the books, and when I can abide by it without compromising our security I will, and thus I will go before Congress as the statute says, and thus seem to need its after-the-fact ratification of my decision to go to war, but this is not one of those cases, so I’m going to ignore this unconstitutional law.” Or, I want one who says, “I intend to obey the War Powers Act, because it’s law, and it’s constitutional.” Or I at least want one who says, “Hey, opinions on the constitutionality of the law are divided, and I’m going to consult Congress as much as I can and make the decision about whether to abide by its timetables only when the deadline comes.” But this blank “I have the power” talk telegraphs contempt for the intelligence of the American people, and for their duty to know their Constitution. Of course, a public that accepted that duty would cause problems for Obama in other areas.

Isn’t it time we had a president who says aloud the obvious fact that when you massacre a bunch of Christians, you’re making it that much more likely that the American public will demand that the U.S. attack you? Right now, this would be a useful thing for certain terror organizations in Africa to hear…

Yes, really. Even, and especially, support from moral leaders in the Democratic Party.

And leading voices in media who join them in calling for relief from the onslaught of evil. Kathryn Jean Lopez covers that in this post at National Review Online.

But that circles back to the question at the beginning, do we, or does the administration, know the enemy?

Charles Krauthammer said President Obama’s was forced to develop his forthcoming plan to defeat the Islamic State because of the shift in public opinion. “This is a man who’s been dragged kicking and screaming to face reality,” Krauthammer said. “This is a classic example of leading from behind where he [Obama] waits for public opinion and now it’s the public who’s demanding he does something. Americans don’t like to see other Americans killed on television by a prideful enemy like that and our president doing nothing.”

He went on to say if the videos showing the beheading of two American journalists had never been released, Obama’s strategy toward the Islamic State would be completely different. “It changed everything,” Krauthammer said. “It [the videos] changed public opinion—and Obama is nothing if not responsive to public opinion. He doesn’t lead. Here it’s the public that’s leading.”

Because the public is seeing the brutality and threat of this manifestation of totalitarianism.

If we are to defeat the violent Islamist radicals who are today threatening the world, we must shine the brightest of spotlights on this malignant idea at the heart of their ideology. And we must counter it, not just with the force of arms, but with a compelling defense of the anti-totalitarian idea of morally ordered freedom.

What defines totalitarianism is a list of shocking and unprecedented demands:

Give fanatical leaders and movements absolute and permanent authority.

Make these leaders and their followers into virtual gods, charged to take control of history and transform humanity itself.

Release them from accountability to any law and institution, belief and custom, moral norm and precept.

Grant them complete control of every facet of human existence, from outward conduct to the innermost workings of conscience and belief.

The rise of this extremist ideology to prominence coincided with a deep crisis of faith that engulfed Europe after the carnage of World War I nearly a century ago. In response to this crisis, totalitarianism – initially in communist and fascist forms – rose to fill the void. Its vision amounted to the state’s replacing God as central to all things, while anointing certain people and their movements as humanity’s new leaders, deserving the ultimate powers once reserved for the deity.

For the better part of a century, totalitarianism has donned its share of masks and hijacked key vehicles in its efforts to subjugate the world….

The same totalitarian impulse that drove Nazism and communism has hijacked religion as its latest vehicle, creating radical Islamism.

From ISIL to Iran’s mullahs, and from al-Qaeda to the Taliban, these new totalitarians pose similar threats to freedom, dignity, and peace. Displaying characteristic contempt for the rule of law and the crucial distinction between combatants and noncombatants in the conduct of war, they have deliberately targeted civilians and resorted to mass murder, precisely as the Nazis and Communists did.

And here’s a bottom line…

the struggle we face today does not pit one religion against others, nor is it a battle of religion against humanity; rather, it is a struggle pitting lawlessness and tyranny against freedom and dignity. The irony is that this time it is being trotted out in religion’s name.

In this struggle, Muslims have a duty to their faith and to humanity to stand resolutely against Islam’s hijacking by people driven by the same diabolical impulse that unleashed the likes of Hitler, Stalin, and Pol Pot on the world. They must rip away its religious mask and reveal its idolatrous soul before the world.

The religious ideology of this group must be understood to be addressed. But the president keeps sidestepping the Islamic factor in this battle of civilizations.

In a televised address on how to address the Islamic State this evening, President Barack Obama declared the organization variously known as ISIS or ISIL to be “not Islamic.”

In making this preposterous claim, Obama joins his two immediate predecessors in pronouncing on what is not Islamic. Bill Clinton called the Taliban treatment of women and children “a terrible perversion of Islam.” George W. Bush deemed that 9/11 and other acts of violence against innocents “violate the fundamental tenets of the Islamic faith.”

None of the three has any basis for such assertions. To state the obvious: As non-Muslims and politicians, rather than Muslims and scholars, they are in no position to declare what is Islamic and what is not. As Bernard Lewis, a leading American authority of Islam, notes: “It is surely presumptuous for those who are not Muslims to say what is orthodox and what is heretical in Islam.”

The president and his spokesmen claim to not be at war with the extremists who declared war on the US.

On its face, it seems like the administration is sending mixed signals. The president made a rather clear case for a long campaign aimed at rolling back the nascent Islamic State in Iraq and eventually confronting them in their Syrian stronghold. Sources have suggested that this is a mission which will likely outlast the Obama presidency. So why pull punches today?

Josh Earnest made the administration’s thinking clear during his press briefing on Thursday in which he went to tortured lengths to insist that the Islamic State in Iraq and Syria and al-Qaeda were synonymous. Why? Well, claiming these two groups are the same would mean that the administration does not have to approach Congress for a new resolution authorizing use military force.

Which is a big deal.

Instead, the White House can point to the 2001 authorization targeting al-Qaeda, even though the White House had previously argued that the resolution was dated and should be repealed.

Kerry, too, asserted that ISIS “is and has been al-Qaeda.”

“By trying to change its name, it doesn’t change who it is, what it does,” he added.

Just don’t tell them that. “In a message posted on jihadi websites the al-Qaeda general command stated that its former affiliate ‘is not a branch of the al-Qaeda group [and al-Qaeda] does not have an organizational relationship with it and is not the group responsible for their actions,’” Time Magazine reported in February.

The White House’s insistence that the present campaign is merely a continuation of George W. Bush’s War on Terror is unlikely to quiet the increasingly loud voices in Congress demanding a vote on a new authorization.

Okay, well, even if we’re playing legal games with the word “war” and are trying to avoid the politics of getting the people’s representatives to sanction military action abroad, at least there is a plan for victory, right?

“What does victory look like here?” Earnest was asked on Thursday. “What does destroy mean?”

So while this nonsense has been going on, so has this. Read it and weep for her, and for her family and the countless other families of religious minorities in Iraq and other countries targeted by extremist Islamic actions to dehumanize or eliminate them. This is going on every day, like the other atrocities we’re hearing about, representing the countless others we don’t hear about.

I had a US Congressman as a guest on my radio show this week to talk about this, Congressman Jeff Fortenberry. He has been a champion of humanitarian rights. Immediately after the program, listeners spoke up asking that his voice of clarity and leadership be posted online. It is on the network show page, and on the app.

We can do a lot. Complacency is not an option.