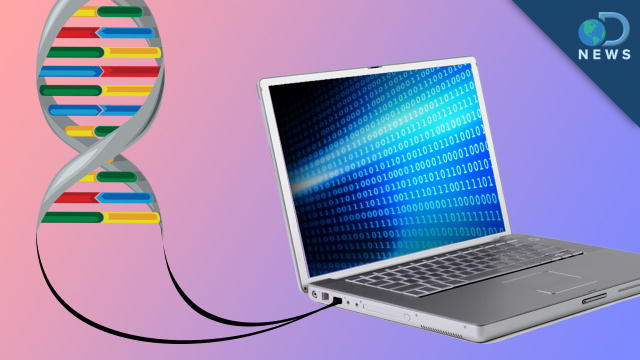 It’s easy to assume that human knowledge is stable – that everything we have learnt will endure for millennia.

Yet oral history can evolve as it passes between generations, books can be destroyed, and digital storage is more fragile and transient than many assume. The hard drives and servers that underpin our world today will eventually become unreadable as the years pass. Our storage methods may serve us well now, but they are far from immortal.

One proposed ultra-high tech solution might hardly seem high-tech at all, not at first: Use the massively complex storage system that exists in each cell of our bodies, our human DNA.

As the Economist puts it,

The volume of data is growing faster than the capacity of the hard drives used to hold it. … The idea is not new. DNA is, after all, already used to store information in the form of genomes by every living organism on Earth. Its prowess at that job is the reason that information scientists have been trying to co-opt it for their own uses.

It may be technically possible to use DNA for such a purpose. Swiss-based researchers Robert Grass and Reinhard Heckel of ETH Zurich suggest “all the data on Facebook and Wikipedia into a few droplets of liquid; all of civilisation’s knowledge could exist within a few cubic metres.” For a million years at least.  Here’s the BBC vid (it cannot be embedded).

At any rate, DNA is actually a language, one that utters living beings. As researchers at the Karolinska institute in Sweden explain, its grammar is “more complex than that of even the most intricately constructed spoken languages”

Instead of simply joining two words together by deleting a space, the individual words that are joined together in compound DNA words are altered, leading to a large number of completely new words.

Oddly, DNA has often been misunderstood. Decades ago, it was widely assumed that most of our DNA is junk left over from evolution. Gradually, it became apparent that we simply didn’t know what most of it was doing back then, know a little more now, and will be finding out for some time to come.

It was also assumed that DNA could not be altered during one’s lifetime, apart from damaging mutations. But DNA often is altered via horizontal gene transfer between life forms, sometimes mediated by bacteria. It can also be altered by epigenetic changes.

It’s disturbing that so many researchers currently seem eager to edit the human genome using new CRISPR technology, altering the germline, when we have so little idea what DNA is all about. It is somewhat like a five-year-old presuming to edit the Constitution.

On a lighter note, what about storing information one billion years instead of just a million? A physicist friend quips,

Put your info into DNA, then into a Prochlorococcus cyanobacteria, dilute it with a few tons of suitably pH/mineralized water, freeze it up on an ice ball, spray some concrete on the outside, and launch it at 40km/s toward alpha-Centauri. If you time it right, it should swing around and come back in about 1,000,000 years. Depending how warm it gets on the journey, you may get back more than you sent.

We’ll be lucky, I fear, if we only have silly problems to worry about.

See also: Writing for the internet is like writing on water The internet may be forever; our pages are not.