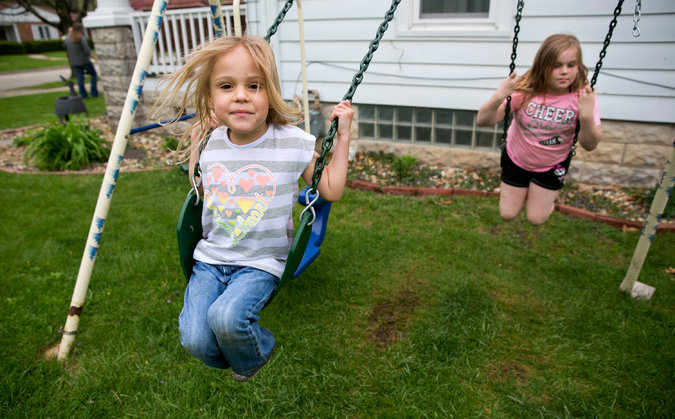 “Alexis Hutchinson, 5, left, with her sister, Joslyn, 9, at their home in Iowa this week.
Alexis was born premature at 22 weeks. Credit: Mark Hirsch for The New York Times”

It stated the obvious.

But on Thursday, this story appeared on the cover of the New York Times, prominently, above the fold, with a photo to help illustrate the point. First of all, look at the photo and read the caption. That pretty much sums up the story. Which became much more difficult to access online the very day it appeared.

A small number of very premature babies are surviving earlier outside the womb than doctors once thought possible, a new study has documented, raising questions about how aggressively they should be treated and posing implications for the debate about abortion.

Several things about that. The photo shows a thriving young girl who was born ‘very prematurely’, illustrating the full humanity of life at all stages. The opening sentence in the piece emphasizes “a small number of very premature babies”, planting the idea that these babies are “very premature’ (so what?), and that only a “small number” of the them survive outside the womb if delivered that early (so…we should disregard them?). Oh, and another thing downplayed in the lead. It was documented in “a new study”.

What was buried deeper in the Times story was that this study was produced by the esteemed New England Journal of Medicine.

There’s a lot to say about this report, a lot to unpack. But for now, the clear and delightful humanity of the little girl on the swing in the photo accompanying the story says it all. And the implications this has on the debate about abortion…no question. After the Gosnell trialthere were enormous implications. Truth has a way of coming out in spite of efforts to suppress it.

Across America, states are introducing bans on abortion after 20 weeks. That’s a five month old baby. This New England Journal of Medicine study will certainly add information to that heated debate, which is nothing more than a radical, ideological drive in the first place.

How the abortion movement has sustained power and influence after these many years is the bigger story.