The Milkmaid by Johannes Vermeer

Loneliness is a big issue. A 2017 survey in my home town Amsterdam showed that half of people living there had some sort of issue with loneliness, of which one-fifth report feeling “severely lonely”.  As this recent MercatorNet article points out, loneliness does not only sound very sad, it is also a public health hazard.

To my mind, it is not a very big jump to connect loneliness to the type of love we are living out in practice in our current-day societies. When I talk to my students, they have often been thoroughly imbued with the realization that it’s important to love yourself. And surely that’s a great psychological truth. They also seem rather interested in some form of “spirituality”.

But what if things remain there? What does that mean for loneliness? Here are some lessons from the history of thought.

If you study the philosophy of the Imperial age, there is an interesting 180 degree turn. Whereas the Hellenistic age had been very materialist in its thought, the Imperial age became spiritualist. Alexandria became an important meeting point for Greek thought and religion from the East. In the person of Philo of Alexandria, for example, Judaism and Greek thought met and made a first attempt at synthesis.

But different forms of Greek and eastern paganism also had their influence. Key discoveries of Plato about transcendence became the focus of attention in Middle- and Neo-platonism during the Imperial age.

In our time we enjoy a big mix of conceptions, with postmodernism challenging materialist foundations that were closely married to empirical science, and introducing new forms of spirituality. In these forms of spirituality echos of the preceding individualist culture remain, and become spiritualized. New spirituality celebrates “love”, but more often than not it is a form of eros, love that in the last instance focuses on the needs of the self.

A spirituality centered around eros is not new in the history of mankind, and perhaps the greatest philosophical exponent of it is the Neoplatonist Plotinus. His whole philosophical system revolves around the One-God, who in a way is One and Three. While such a conception of God may sound familiar to Christians, there is a twist. The God of Plotinus is love, but is self-love. His God is eternally contemplating himself.

The successive persons are not “equally valuable”. There is a hierarchical difference between persons, and the One-God clearly has precedence. The philosophical system of Plotinus is complex and differentiated, not something to be explained exhaustively here. But for now it’s enough that it is based on a trinity bound by self-love, whose persons are not of equal value.

One interesting consequence of this system is the view Plotinus takes of matter. Matter, according to him, is evil, because it results from imperfection: the Soul does not contemplate the Mind perfectly, and that gives rise to matter. And this is exactly why his conception is “spiritualist”: it values the spirit much more highly than it values matter. Seemingly, in an eros-based conception, only one principle can rule them all, and for Plotinus, that’s spirit. 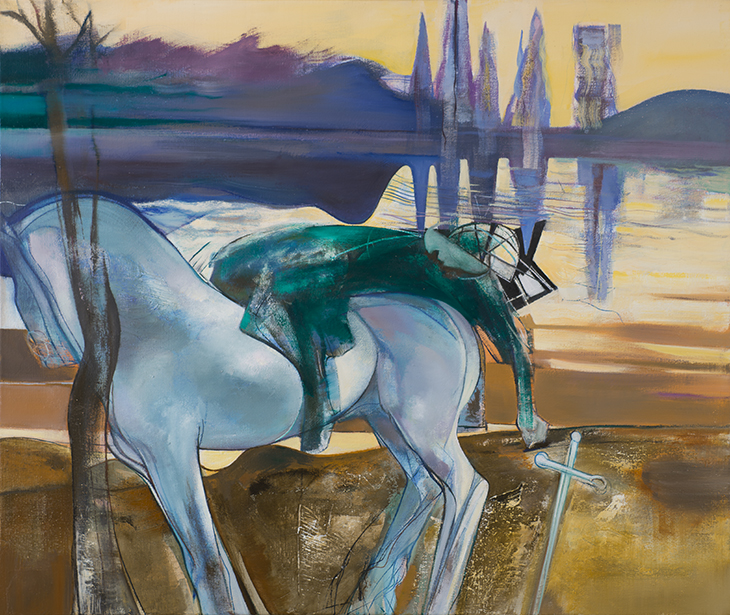 Recently, Christian artist René van Tol explained to me how a key characteristic of Christian art is the coming together of two opposite principles: that of abstraction (the idea, the soul), and the concrete here-and-now (also called the flux, or matter). In his own work, he explores the tension between abstraction, for instance of our ideals, and the practical here-and-now.

This “conversion of St Paul” is a good example. Both the style and the subject explore the Cross that is entailed in living out a relationship with the Eternal God in this world. Still, Van Tol also explains that the beauty in classical Christian art is that it completely respects both principles. To take a Dutch classic, “The Milkmaid” by Johannes Vermeer, each has a very thoroughly studied geometric design behind it, but also shows material reality in all its detail.

This coming together of two opposites which retain their own identity, but strengthen each other, is philosophically and theologically grounded in a concept of God who is Trinity in which three Persons love each other with a love of “agape” or self-giving.

In such a dynamic, each of the Persons remains fully themselves, but at the same time come to something higher through the creative self-giving dynamic, in which each is equally valuable and necessary, though with different roles.

Images of this process can be found everywhere in creation: in art, but also in win-win-win collaborations in business and economics, and the coming together of body, soul, and spirit in the human being. Human beings coming together in a family form an even more perfect image.

The dominant contemporary paradigm of “eros spirituality” makes us think that differences between us necessarily lead to the dominance of the one, and the consequent suppression of the other. The distrust that is generated, or simply the high importance we attach to our own well-being, may lead us to not be successful in long-term relationships, which eventually leads to loneliness.

But if we switch our understanding of love to also include caritas or charity, then we see that things can also be different. Differences can give rise to a mutual gift of oneself, leading to enrichment which is respectful of the identity of each person, each with their strengths and weaknesses. Living out this ideal in daily life can be difficult, as Van Tol’s painting illustrates. But the path to the classical beauty is filled with hope.

But what if perfect charity is unattainable for human beings? To that we can answer that we’ve been given a third type of love: philia, or friendship-love, which allows us to give ourselves more fully to those we have come to trust in, and so go beyond eros. Or on a more mystical note we can answer that we are called to sunbathe in the Sun of God’s Love on the inside, which will allow us to reflect more charity in our dealings with others, even though our love will often fall short.

Both these answers are ways in which different principles come together in a constructive whole, in which everything and everyone retains their value. If others are our friends, and we are sustained by God on the inside, we can hope to continue the road with them. And in this way we will not be alone.

*This article was inspired by The Schools of the Imperial Age: A history of ancient philosophy, by Giovanni Reale. This book is recommended reading for those interested in the philosophical schools mentioned.

Daan van Schalkwijk writes from the Netherlands. He teaches biology at a university in Amsterdam and is the director of Leidenhoven College, a collegiate hall of residence. Visit his blog, Science and Beyond.

Daniel Bernardus writes from the Netherlands. He teaches biology at Amsterdam University College and is the director of Leidenhoven College, a collegiate hall of residence. He blogs at danielbernardus.com.... More by Daniel Bernardus