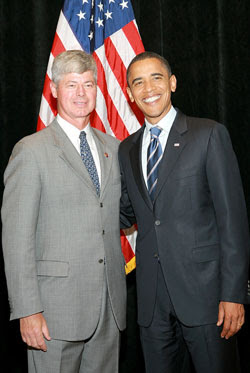 Bart Stupak caved, after all.

His press conference was brief and sounded like it was hastily put together.

Stupak just addressed the media saying, “I am pleased to announce that we have an agreement. With the help of the President and Speaker we have been able to come with an agreement to protect the sanctity of life in Health Care Reform….that there will be no public funding for abortion in this legislation.  We’ve all have stood on principle.”

When I heard that in the live press conference, I thought ‘will be signed’? And what does the rest of that sentence really mean?

Stupak seems to be either incredibly trusting of the President, or completely unaware that the President Obama can reverse any executive order he writes.   Executive Orders can also be reversed by legislative action.

As for trusting the president, we do have some notable examples of him reneging on promises. Like the September 9th one to the joint session of Congress (and the nation) that his health care bill will not allow federal funding for abortion (though the Senate version he’s been pushing does). And the one last July to Pope Benedict that he would do whatever he could to reduce abortions, though he’d already reversed the Mexico City Policy that freed up funding for abortions overseas, among other things.

As for trusting the legislative branch of government not to reverse this order at some point, that takes a great leap of faith. But Washington is all about surprises these days.