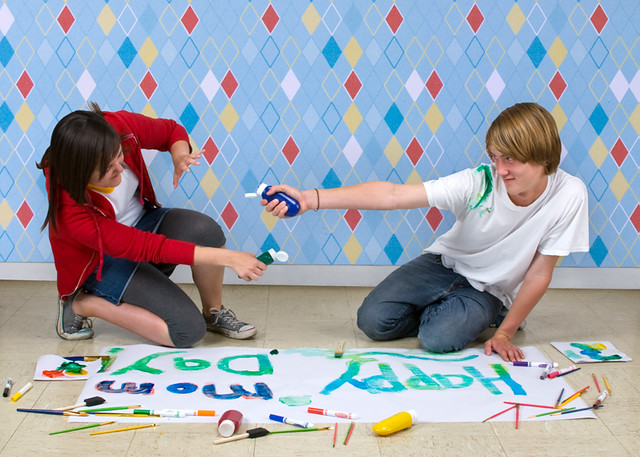 Now that summer is in full swing, are your kids driving you crazy yet? Know what I’m talking about? The fighting, the crying, and the tattle-taling? Are you tired of playing Solomon – always trying to sort out the arguments between children who insist that they are right and the others are wrong?

Ladies, here is the two-word solution:

Unfortunately, there’s no quick and easy solution to the bickering that so often goes on between siblings. Like the common cold, there’s no cure for sibling squabbling. But there are things we can do to mitigate the severity and frequency of the fighting. For example:

“I AM NOT HERE AND I CANNOT HEAR YOU!”

I think the first thing to do in dealing with incessant bickering is to look for patterns in our children’s behavior that help us identify the general cause of sibling tensions. Each family is different, so I don’t want to make any broad generalizations. But here is what I have observed about my own brood:

Pattern 1: There tends to be more rivalry between siblings who are right next to each other in birth order. Princess (no. 5) and All-Star (no. 2) never fight. But Princess and Rascal? There exists between them a love-hate relationship that produces an abundance of laughter and tears. And a whole lot of screaming.  Rascal (no. 4) also fights a lot with Feisty (no. 3). The cause? Because siblings born next to each other  are closer in age, they play together more, and so they fight more, too. Moreover, some children have a really hard time being dethroned when a younger sibling is born and it can take years for them to get over it.

Pattern 2: Younger children like to provoke their older siblings and then cry wolf when the older child retaliates in the slightest way. When Rascal does this, it drives All-Star and Feisty nuts. Think  facial contortions and domestic explosions. Causes: Younger siblings want to be included in older sibling’s play but they can’t quite keep up, so they express their frustration by messing up their sibling’s stuff or interrupting their games. They also provoke their older siblings as a way of getting attention. Rascal loves attention.

Pattern 3:  On the other hand, older siblings tend to boss the younger ones around, and sometimes they get them to do their dirty work. All-Star and Feisty often tell Rascal to fetch things when they know they are supposed to get permission first. Then they fight over who was responsible for the misdeed.

Mom:  Who took out that box of crackers?

Feisty: (with a blank stare) Not me.

Mom: Rascal, did you take it out?

Rascal: Yes, but Feisty told me to!

Causes: Older siblings naturally have more experience and know more, which they sometimes use to their own advantage.  Occasionally they are given charge of their younger siblings, so they get used to using authority and them sometimes mis-use it. Younger siblings resent this.

Pattern 4: Idleness is the devil’s workshop. This was one of my Mom’s favorite sayings when I was growing up. My children are rarely bored. But on those few moments when they are, they usually end up fighting. Cause: When kids don’t know what to do with themselves, they sometimes pick on other kids or interrupt their play.

Pattern 5: The more stuff my kids have, the more they have to fight over. This is especially true when my kids are younger and they haven’t yet learned to respect other sibling’s boundaries and property. Princess still sometimes thinks: What’s mine is mine. And what’s yours is mine. Causes: Kids are born selfish. They still have to learn that they are not the center of the universe.

Once you see the general causes of sibling tensions, you can begin to come up with ways to address them. I don’t have easy solutions, but I do have some suggestions.

Pattern 1 – If sibling rivalry is the main problem, find ways to reduce the competition between your kids. While all children need to learn how to lose graciously, too many competitive games exacerbates the problem. Encourage games that are co-operative instead. Board games like BusyTown: Eye Found It (for little ones) and Escape (for bigger kids) are good examples of co-operative games where they players work together as a team. For more ideas of co-operative games, check out this link.

Another way to reduce the competition is to encourage your children to pursue their own individual hobbies or interests, things that will make them feel special and unique. Feisty is into hockey whereas All-Star is into baseball. It doesn’t bother super-competitive All-Star that Feisty can skate faster and better than him because he know he can pitch and bat better than his brother.

Kids often compete for their parent’s time and attention. I get this a lot  when Princess and Rascal fight over my lap.  When my kids are constantly competing for my attention, my intuition tells me they need more individual T.L.C.  I have noticed that during the school year, when they get more one-on-one mom time, there is less vieing for my attention.

Patterns 2 and 3 – When frictions arise due to bothersome or bossy siblings, try to be proactive. Don’t wait for each battle to erupt before correcting your children’s behavior; by then your kids are angry and you are probably annoyed. During calmer moments, talk to your kids about how they should treat eachother. (ie. with respect and patience). Press the ideas that their brothers and sisters should be their best friends for life, that they are God’s gifts to eachother, and that they have so much fun when they get along. Of course you’ll have to back up your words with actions. When Rascal provokes Feisty, he not only suffers the wrath of his brother, but he has to spend time alone in his room. If Feisty bullies Rascal or gets him to do things he’s not supposed to,  Feisty loses privileges.

On the other hand, it is not fair to expect the older ones to be full-time babysitters or to always have to include younger siblings in their games.  While we need to encourage older siblings to be inclusive of their siblings, they should also get a break from their younger ones. We need to offer younger siblings activities  to do on their own that are appropriate for their age, so they are not always frustrated  and frustrating.

Pattern 4 – If one of my children picks a fight with a sibling because he’s idle, I encourage him to keep me company and help me out with the housework. It’s a great opportunity to have a little chat with one of my kids, and they usually oblige. Another option is to have him pick a slip from the activity/chore jar. The slip has an activity which he then has to do before choosing an activity of his own. See Ten Boredom Busters and Brain Boosters and Summer Strewing: How to Keep Your Kids Busy for more ideas.

Pattern 5 – With regards to fighting over toys, we need to teach our children to share, take turns, and get permission from others to use their stuff. This is not easy, but again, actions speak louder than words. If children are continuously fighting over a toy, take it away. Tell them, “You can have it back when you’re ready to share it or when you have come to an agreement over who can use it.”

Sometimes there is confusion over who owns a toy and whether or not a child needs to get a sibling’s permission to use it. In our house, if a toy is more than a year old and the original owner no longer keeps it in a special, designated place (if it just gets thrown into a toy bin), the toy becomes family property. Permission from siblings is no longer needed to use that toy.

Frankly, I think that most American kids, including my own, have way too many toys. To teach them detachment and generosity, I often encourage them to give their toys away, especially ones they have outgrown. The fewer toys in the house, the fewer toys there are to fight over.

Finally, here are some general suggestions for keeping peace in the house.

I find that the saying two’s company and three’s a crowd to be especially true with kids. My children play better in pairs, and they often pair themselves off, even if they are all playing in the same room. When a fight erupts, sometimes all I have to do is change the pairing to restore peace.

Also, contending with immature people (a.k.a. kids) all day long is tiring. So, after lunch during the summers, I send each child to a separate room for quiet reading time.  We all get a nice break from each other. I looove it!

“I AM NOW HAVING MY QUIET TIME.”

Try to use humor as often as you can in dealing with sibling squabbling. When the boys get into a fight, my husband sometimes makes them line up against the wall with their arms up. Then each child takes a turn tickling the others. Humor is a great way of conveying the message: Look, what you’re fighting over isn’t really a big deal. Let’s have a laugh and then go play.

If it seems that your kids are forever fighting, remember that you’re not alone. Here at Casa Cooney, we have lots sibling squabbling. Sometimes I can’t tell if the screaming is due to laughing, crying, or fake crying. But there’s HOPE. When I was a kid, I fought with my siblings daily. I remember bragging to my aunt that my sister and I only fought a dozen times one day. (My poor mom!) Now, my siblings and I get along beautifully. Even better, as I watch my kids grow, I see how the older ones outgrow the bickering. Big Sis and All-Star used to fight like cat and dog. Now they rarely have a quarrel. Even All-Star and Feisty don’t scrap nearly as much as they used to.

So hang in there. There’s a light at the end of the tunnel. There’s even an up-side to all these quarrels. But that’s the subject of another post.

Mary Cooney is a homeschooling mother of five and former pianist living in Maryland. She blogs at Mercy for Marthas where this article was first published.