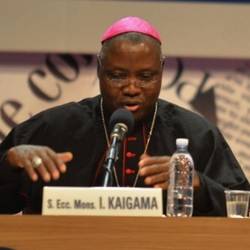 Now we have a tangled web.

So much has happened so fast at the Synod, it’s difficult to put it together in one narrative. Especially since there are several different strands getting rapidly entangled in this two week event about to wrap up. The Saturday final document will be revealing. For now, some updates.

The mention in the last post of a translation issue, which seems like ages ago in such a rapidly changing Synod, referred to language in the Relatio, or interim report. Like the much debated paragraph #50:

50. Homosexuals have gifts and qualities to offer to the Christian community. Are we capable of providing for these people, guaranteeing […] them […] a place of fellowship in our communities? Oftentimes, they want to encounter a Church which offers them a welcoming home. Are our communities capable of this, accepting and valuing their sexual orientation, without compromising Catholic doctrine on the family and matrimony?

The phrase “valuing their sexual orientation, without compromising Catholic doctrine” threw many people. Whatever took place in the privacy of those assembly rooms to hash out discussions of what was supposed to be a broad sweeping focus on the many trials people face in modern culture, it quickly turned into a focus on the issues of divorced and remarried Catholics and communion, and on the Church’s stance on sexual orientation.

After an interview with the prominently positioned Cardinal Kasper appeared in Zenit.org in which he dismissed the input of African bishops at the Synod (noted in the last post), there was such a strong backlash to his views, that Kasper denied he had said such things, nor ever would speak that way. Which was baffling, given that the interview was posted by Edward Pentin, a veteran Vatican journalist known and respected for his longtime outstanding coverage of Church matters and intricacies. I’ve known Edward for many years, had him on my radio show as a regular guest, and trusted his reporting unfailingly.

So even though Zenit took the interview offline, Edward Pentin published this response on his site, together with the audio of the interview.

The emergence of the strong and clear voices of the African bishops has been an important element of this Synod, and Pope Francis recognized that late into the second week but in time to name one, and another striking voice, to the committee drafting the final Synod document.

Fr. Lombardi reported that “the Pope decided to act” by adding two new members to the writing committee that will synthesize the reports from the small circles of language-based discussions meeting this week. There have been loud grumbles about the makeup of the original group appointed by Pope Francis for its lack of geographic range. The two new appointments are Cardinal Wilfrid Napier of South Africa and Abp. Denis J. Hart of Melbourne.

Numerous Vatican Synod Fathers have voiced grave concerns both within and without the Synod hall over the last few days that the Synod mid-term report has indeed endangered assurance of doctrinal security, and with potentially grave consequences.

Most recently, Australian Cardinal George Pell said: “In seeking to be merciful, some want to open up Catholic teaching on marriage, divorce, civil unions, homosexuality in a radically liberalising direction, whose fruits we see in other Christian traditions.” He urged, “the task now is to reassure good practising Catholics that doctrinal changes are not possible; to urge people to take a deep breath, pause and to work to prevent deeper divisions and radicalising of factions.”

Exactly. Effort must be made to prevent deeper divisions of the factions within the Church, which Pope Francis has repeatedly called on to be the ‘field hospital’ for the world’s wounded.

That CWR report notes this:

Perhaps this morning’s addition of Cdl. Napier of South Africa to the writing committee is coincidental. Some, however, speculate that it was engineered by prelates who believe that the perspective of the non-Western bishops is a critical contribution to the synod deliberations. The challenge to remain Catholic makes the heroic witness of the Africans all the more significant—they have not been persecuted by social pressure to conform, rather they have maintained their faith in the face of violence, beheadings, and burned villages; their bishops, said Cardinal Timothy Dolan of New York, have “mopped up the blood of their people”.

Cardinal Dolan also reports that during the synod he has been inspired by the African bishops. “We in the west” are tempted to dilute the teachings, to worry about our popularity. However, said Cdl. Dolan, the Africans know they are not called to be popular but “to propose the truth”. The American cardinal declared the African testimonies as “prophetic.”

On radio Thursday,  I had a roundtable on the Synod, parsing the reports and news stories and documents so far released for whatever we could learn and clarify for others. Word On Fire’s Fr. Steve Grunow repeatedly emphasized this: The language of doctrine is clear and settled. The Synod is working on the language of encounter.

Fr. Robert Barron, Founder of Word On Fire media ministry, published this commentary the other day, to calm concerns while we wait for documents to come out of this Synod that will continue to be considered for the next year until the next synod is held.

What has just appeared is not even close to a definitive, formal teaching of the Catholic Church. It is a report on what has been discussed so far in a synod of some two hundred bishops from around the world. It conveys, to be sure, a certain consensus around major themes, trends that have been evident in the conversations, dominant emphases in the debates, etc., but it decidedly does not represent “the teaching” of the Pope or the bishops.

One of the great mysteries enshrined in the ecclesiology of the Catholic Church is that Christ speaks through the rather messy and unpredictable process of ecclesiastical argument. The Holy Spirit guides the process of course, but he doesn’t undermine or circumvent it. It is precisely in the long, laborious sifting of ideas across time and through disciplined conversation that the truth that God wants to communicate gradually emerges. If you want evidence of this, simply look at the accounts of the deliberations of the major councils of the Church, beginning with the so-called Council of Jerusalem in the first century right through to the Second Vatican Council of the twentieth century. In every such gathering, argument was front and center, and consensus evolved only after lengthy and often acrimonious debate among the interested parties.

In the immediate term, we’ll see whether some consensus evolves in Saturday’s final document. Final, that is, for now.