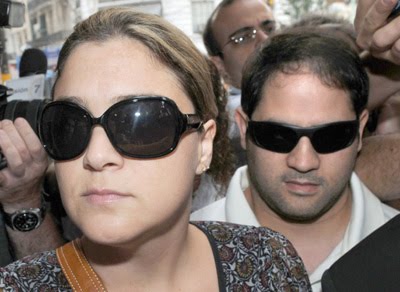 A billion-dollar inheritance, a swaggering
media conglomerate, newspaper rivalry, an incompetent government rankling over
criticism, the open sores of past savage political oppression – and DNA tests.
It’s the stuff of chunky airport novels — and it is one of the biggest
political stories in Argentina this year. More significantly, it is a reminder
of how wedded we all are to our genetic heritage.

At the height of Argentina’s dirty war with
left-wing guerillas in the 1970s, Marcela and Felipe Noble Herrera were adopted
by Ernestina Herrera de Noble, owner of the Clarin media conglomerate. Mrs
Herrera de Noble, now 84, claims that the two heirs of the Clarin Group, which
controls Argentina’s largest newspaper and cable network, and one of the
largest television stations, were foundlings left on her doorstep.

Advocates for victims of the military junta
which “disappeared” thousands of its foes, especially the Grandmothers of the
Plaza de Mayo, say that Marcela and Felipe might be two of the 400 children of los desaparecidos who have not been
accounted for. To get closure on the issue, they insist that the two should
have DNA tests to determine their parentage. In December Marcela and Felipe
gave blood samples to a private laboratory which matched their DNA against two possible
families. But they refused to give samples to the government because, they
said, the matching process was tainted.

The Clarin group’s outlets have been harsh
critics of the incumbent president, Cristina Fernandez de Kirchner, so the
issue has become politically polarised. If the children are the offspring of
victims of the dirty war, it is even possible that Ernestina could be jailed
for an illegal adoption. Settling the identity of Marcela and Felipe could
allow the President both to settle political scores and crush a nettling
critic.

So last year the government passed a law
authorising compulsory DNA testing in cases relating to crimes against humanity
in addition to a law which could be used to break up the Clarin group. On May
28, police raided the home of Marcela and Felipe, strip-searched them, and
seized underwear and toothbrushes for DNA sampling. Subsequent testing showed
that the DNA had been contaminated, so the case is still not settled.

The highly emotional case raises
interesting questions. “Our identity is ours. It’s a private thing and I
don’t think it’s up to the state or the Grandmothers to come and tell us what
is ours,” Ms Herrera has said. “There is not a single concrete fact showing
that we were taken from the junta’s imprisoned enemies.” Her brother felt
the same but was more detached and pragmatic. “Whatever the result, for me
it’s just one more sheet of paper, one more fact in my desk,” Mr Herrera
said.

Although the government’s argument has
obviously been fabricated for the most venal political motives, it is not
altogether ludicrous. The Justice Minister, Julio Alak, fulminated that “This denies
the families of los desaparcidos, the Grandmothers and all the Argentine people
the right to the truth”.

Here the right of the public to know the
truth of who you are collides with the right to privacy. Nearly everyone would
agree that refusing to be fingerprinted or refusing to give one’s name to the
police is wrong. “The Man With No Name”, Clint Eastwood’s character in The Good, the Bad and the Ugly, was the
last of his kind. In today’s interconnected world, your neighbours not only
want to know who you are, they need to know.

Disturbing this norm rattles people. It is
one reason – or at least one excuse – why the French government wants to ban
the face-covering burqa worn by Muslim women. Not just because the figure
hiding beneath the tent-like garment might be a thief or a terrorist, but
because showing one’s face is a necessary part of participating in society. The
days of the Phantom of the Opera are over.

There are practical benefits as well. For
instance, allowing police to stockpile DNA samples helps them to convict
criminals where there is little other evidence. It is still controversial,
because it can lead to racial profiling or a presumption of guilt based on
inadequate evidence. Critics argue that jurors, in the words of an Australian
judge, might be “overawed by the scientific garb in which the evidence is
presented and attach greater weight to it than it is capable of bearing”.

But the critics are finding the case for
privacy ever harder to make. In July, based on DNA evidence, Los Angeles police
found the “Grim Sleeper”, a man who may have killed ten young women. The
initial link came from his son, who was picked up on a felony weapons charge.
Forensic experts in the police realised that his DNA appeared to be linked to
the serial killer. This astonishing success is bound to convince many people
that DNA data banks are crucial for fighting crime.

Furthermore, coming to grips with a genetic
heritage is a psychological necessity for many people. Many adoptees spend
years looking for their birth mothers. Lobby groups representing the children
of anonymous sperm donors are describing ignorance of their origins as little
short of a crime perpetrated by IVF clinics. Even if they grow up in loving
families, many still feel like “genetic orphans”. On a medical level, knowing
one’s biological origins is needed to manage genetic disease or avoid unwitting
incest with siblings conceived from the same man’s sperm.

On the other hand, forcing people who have
committed no crimes to confront the truth about their origins can be the source
of trouble as well. How many marriages have been destroyed by the revelation
that a child was born of a different father? How many people are shattered when
they discover that their parents are not their real parents? In cases where
personal identity is needed to solve a crime, the least damaging option may be
silence. When ignorance is bliss, surely we have a right to it.

Even to this there may be exceptions. What
about a mother’s right to find her own child?

Another heart-rending story from
Argentina’s Dirty War illustrates this. Left-wing political activist Sara
Méndez was kidnapped by right-wing soldiers in 1976 and her 20-day-old baby Simon
was snatched away and adopted out. “Don’t worry, Senora,” the commando told
her. “We aren’t fighting a war on children.”

Miraculously, she survived years of prison
and torture and began searching for her son. She looked for years. In 1991 she
located him, now named Gerardo Vázquez.
But
he refused to undergo a DNA analysis. She insisted for nine years. Finally he
agreed. But he wasn’t Simon. It must have been devastating for both of them.

In 2002, after 26 years of anguish, Sara did find Simon. It
was a painful meeting, as the young man had just discovered that his adopted
parents were not his real parents, his adopted father was not his real father,
his biological father was dead and his biological mother’s husband was not his
father. For him it was a shattering experience. He severed all ties with the
couple who had raised him and changed his name. Who can say whether he was
better off now knowing the truth?

What these heartbreaking stories remind us
is how lives can be wrecked when children are torn from their biological
parents. As the genetic heritage of children gets more and more scrambled with
IVF, same-sex parenting, surrogate motherhood, and sperm donation, the dilemmas
posed by the experiences of Marcela, Felipe and Simon will seem simple.
Adoption is painful enough. What sorrows await a generation of children born
through artificial reproductive technology?


Michael Cook is editor of MercatorNet.