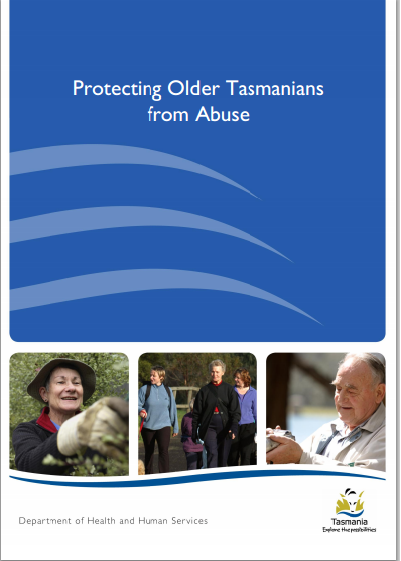 News from Tasmanian Premier Lara Gidding’s website talks about the launch of the Tasmanian Elder Abuse helpline. An undoubtedly worthwhile initiative, the helpline is set against a background where, as the media release observes: “It is estimated up to 4200 older Tasmanians suffer physical, emotional verbal or financial abuse at the hands of someone close to them.” This is set to increase statistically as Tasmania moves towards a peak population cohort of over-65s in 2021, totalling one in four Tasmanians.

The Department of Health and Human Services document, Protecting Older Tasmanians from Abuse describes Elder Abuse, defines its topic:  “Abuse of older people is a single or repeated act occurring within a relationship where there is an implication of trust, which causes harm to an older person.” This can include physical, psychological/emotional, financial, sexual and social abuse as well as intentional or unintentional neglect. The department further wisely advises:

“Abuse of older Tasmanians is a violation of their human rights and a rejection of the fundamental respect that our older people deserve.

“Older Tasmanians deserve dignity and to feel secure and safe. Preventing abuse is a community responsibility and requires all sectors of society to actively address its causes and reduce its harmful effects.”

Indeed. To remain true to such an important and worthwhile objective, the Tasmanian Government cannot proceed with creating euthanasia and assisted suicide law.

It is not hard to imagine a situation where a relative or other person of trust could abuse an elder to the point where he or she might agree that their life’s not worth living. The incentive of an inheritance cannot be dismissed.

The likelihood, if euthanasia and assisted suicide were ever legal, that such abuse would remain hidden, (just as elder abuse in any form is hard to detect and act upon) is made all the more concerning because the only witness would be deceased. Who would ever know? It should never be the role of government to make crime easy and detection, unlikely.

Indeed, whether or not this, the ultimate in elder abuse, would be widespread, occasional or even only rare, the possibility cannot be dismissed. We cannot, as some would suggest, only base decisions on empirical evidence. That would require us to legislate and then monitor – the ultimate problem being that some would lose their lives to prove the point.

No, there is sufficient doubt based simply on human nature and the prevalence of elder abuse added to the financial incentive. The precautionary principle must apply here.

The Tasmanian Premier needs to rethink her commitment to euthanasia legislation and turn instead to make protecting ageing Tasmanians a higher priority.