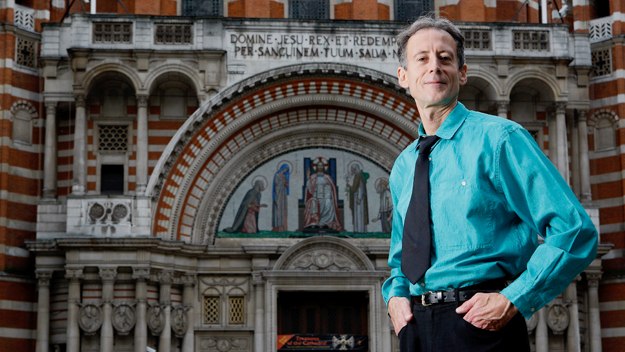 ‘The Problem With
The Pope’ narrates a fascinating tale which begins in 1962 when the
Second
Vatican Council kicks off and the Church experiences the spritual
equivalent of
Britain’s first Isle of Wight Festival. Joseph Ratzinger was headlining,
blasting out ‘Talking ‘Bout Your Liberation’ and the whole of the
Catholic
Church was smoking Peace and Love.

As an advocate of
‘democracy, liberty and social justice’ Tatchell’s imaginative
introduction
takes on a highy interesting psychological analysis – perhaps
commissioned by
Oprah or Jeremy Kyle – of a significant turning point in the Pope’s
life, which
scarred him forever. Although Joseph Ratzinger had lived under the
brutal Nazi regime
in Germany and the Second World War, according to Peter it was in fact
some
scary student protests at the University of Tubingen that made a lasting
impression on the Pope. So deep were the scars, Ratzinger ripped
off his Vatican Two wristband and
‘developed an aversion to anything democratic.

In order to
contrast himself with the Pope therefore, Tatchell feels the need
throughout to
repeatedly remind us that he likes fundamental democratic freedoms. So
passionate is he for example about the
freedom of religious expression, that he is horrified to find that when
interviewing a Catholic woman named Vilma in the Phillipines that “she
takes
the Pope’s opposition to birth control very seriously.”

It would seem
that the concluding point of Peter’s conversation with Vilma is that he
will
defend everyones right to freedom of expression-providing they express
his
views. Peter’s most moving soliloquy,
which he describes as an ‘interview’ with Fiona O’Reilly of
Catholic
Voices, is a beautiful manifestation of this particular conviction and
commitment.

The Problem With
The Pope is that he dares to disagree with Peter Tatchell. But Tatchell
cottons
on to something from the very beginning, which in fairness I did not
anticipate.
His eagle eye can see from a mile off that allegedly the Pope only ever
consults like-minded people in order to push through his own personal
agenda. It
is deeply moving to witness Tatchell follow the Pope’s example with such
fidelity
and obedience.

Madeleine Teahan works as a parliamentary researcher in
the House of Lords. She read Social and Political Sciences at Corpus
Christi College, Cambridge.