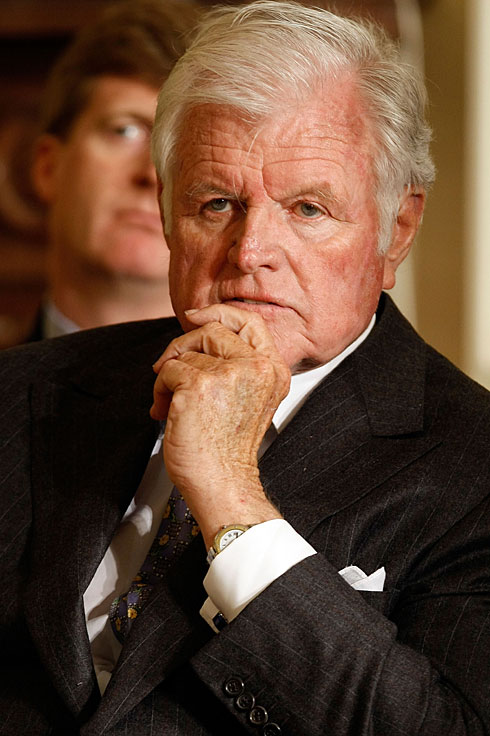 There is no separating the senator from his religious identity, so
reactions today to his passing have him as either the most influential
Catholic politician in history, or one of the many who very publicly
endorsed laws gravely counter to the teachings of the Catholic faith.

He was actually some of both.

The nimbus of Catholic piety surrounding nearly a
century’s worth of Kennedy highs and lows gives anti-Catholic bigots a
satisfying sense of superiority, and some Catholics a scathing sense of
scandal. The Kennedys are a gifted, public-minded clan of great wealth
and privilege, whose shenanigans, some feel, have served more to shame
than showcase the sanctity of the Catholic family or the great,
full-hearted, and consoling wisdom of the Catholic faith. There is a
feeling that the tribe has been betrayed, and therefore resentment,
too, has blocked prayer, or limited it to general good wishes for the
family, and rather neutral feelings for the man.

One could argue, however, that the Kennedy Saga, in all its triumph
and trouble, presents Catholicism to the world in all of its messy
imperfections and abundant mercies. While we might wish for public
Catholics to live lives of such transparent holiness as to edify a
nation and promote Catholicism as a showcase of saintliness, they too
often instead reveal the Church as the hospital for sinners in chronic
need, who are never turned away.

The Kennedys are neither holier nor more wicked than other families,
but where most of us commit and repent of our mortifying sins in
relative obscurity, the veil of privacy granted to them is
excruciatingly diaphanous; it tempts others to presume knowledge of the
state of souls, and since the days of public penances are long past,
there is further temptation to assume an arrogance that may or may not
exist. Is it arrogance and entitlement that keeps a public man of
public failings turning, and turning again, to the Mass, the
sacraments, and the tribe, or is it a kind of humility, a declaration
of need that supersedes riches and power and all the consolations of
the world?

Ted Kennedy belongs to his family, to the Catholic
Church, and — as representative of the people of the Commonwealth of
Massachusetts — to the United States of America. But before he belonged
to any of those, he belonged to God, and it is to God he eventually
stands. If we knew nothing of him beyond that one unalterable fact, it
would be enough to warrant our heartfelt prayers on his behalf. With
all we do (and do not) know of God’s Ted Kennedy — and all we know of
ourselves, of our own sins, our humiliations and triumphs, our public
moments of indiscretion and our private agonies — our  instincts to
prayer should not stumble before the shame of another, or we shame
ourselves.

We should pray for the Kennedys. And for all the nation’s leaders…