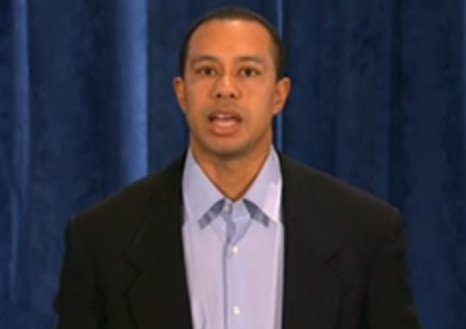 Though it was much-anticipated and rather heavily promoted in the media, I made no note of the Tiger Woods press conference scheduled to televise his first public statement since his scandalous affairs broke last November. But then happened upon it simply by turning on the news that Friday morning, just as it was beginning. Asked about it a few days later on radio, I said little except that we can’t judge the heart or intentions of anyone. But actions are visible, and he did seem kind of peeved that he had to be out there talking about this….

A lot of folks in the media did not hold back their opinion of the televised event, of the timing and location and wording Tiger Woods and/or his handlers chose for this occasion. It was everywhere.

So the next evening, my son and I are having this lively conversation and jokingly turn the television that was on in the background to something serene and calm to have on the screen in the background, but muted so it won’t distract our attention. Laughing, he said ‘The Golf Channel works well’, and so we did. But an interesting thing happened…..

Tournament coverage was followed by a studio panel discussion of the Woods press conference, and it seemed serious and engaging, so we listened. It was some of the best insight I’ve heard yet. Especially the comments emerging from golf pros about what they’ve put up with for a long time…..Tiger Woods fell out of grace with his colleagues and the press that covered him (in more ways than one) a long time ago. He has behaved badly and angrily on the course time and again, throwing clubs and swearing angrily and breaking a sort of code of honor of the sport that was maintained with decorum by other golf greats before him. One of the broadcasters said he didn’t uphold or even recognize the basic level of respectful human discourse expected in the game and certainly at that level when he faced the media after tournaments.

Wow. Good lessons here for everyone. Where was this conversation before the fall?

Anyway….here’s a Golf Channel sample of reactions. Including the Dalai Lama’s.

And here’s an interesting handling over at GetReligion. I didn’t go further than the second comment, but thought this was interesting:

When Tiger talked about returning to Buddhism, he talked about realizing he had been looking outside himself too much. This is very different from a Christian come-to-Jesus apology where someone would admit to thinking too highly of oneself and realizing they need to look outwardly to Jesus. So, perhaps the “control-freak” aspect of this apology boils down somewhat to religious differences about where “redemption” is located.