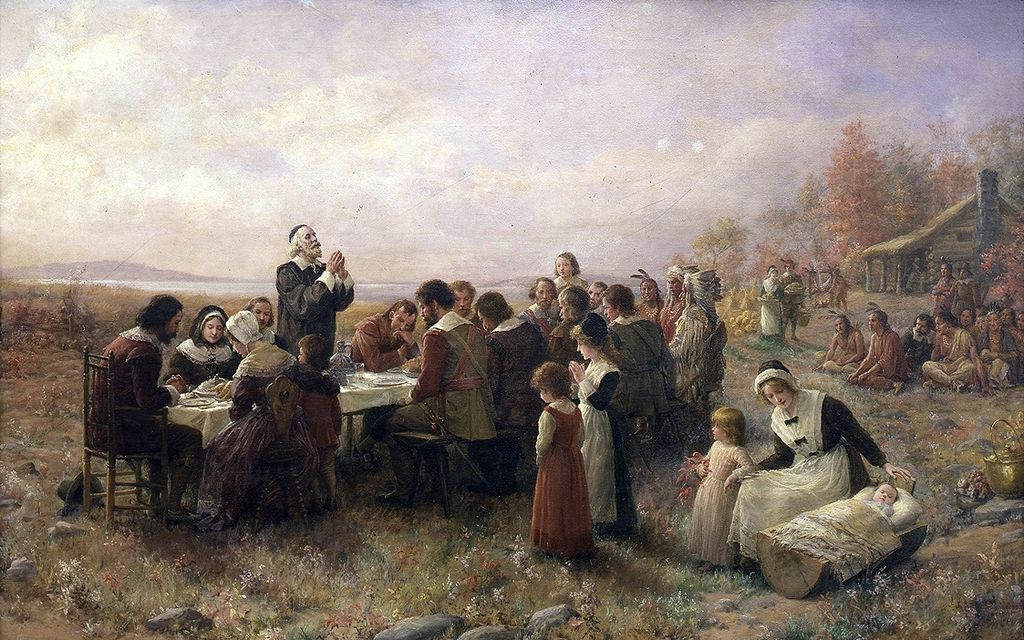 “The First Thanksgiving at Plymouth” (1914) By Jennie A. Brownscombe via Wikimedia

In the early 17th century, King James I commanded the English people to belong to the Church of England. Many who refused to comply lost their jobs and went to jail. In response, a small group of these separatists left England and journeyed to the New World.

History remembers them as “pilgrims”. They sought to practice their religion free from government intervention.

In September, 1620, they sailed on the Mayflower, reaching land sixty-five days later. The following Autumn, those who remained took pause and gave thanks for their harvest and survival. This is their story.

The custom of giving thanks was not new to the world or America. Expressions of gratitude have been seen throughout history. The ancient Egyptians, Greeks, Romans, and Chinese celebrated harvest festivals.  English farmers stored the last of their grain, and then enjoyed harvest home festivals. And the Native Americans celebrated  such customs as their Green Corn Harvest. No matter where or when it occurred, a bountiful harvest was an occasion of joy. And such gratitude was particularly relevant in 1621.

Pause and reflect on the pilgrims’ ordeal. Disease, hunger and the harsh conditions of the wilderness had taken a great toll. Of the original 102 passengers on the Mayflower, nearly half had died  by the Spring of 1621. Exposed,  they had endured a harsh first winter in Plymouth. Imagine their relief when it was evident that there was sufficient food for the next winter. Clearly, thanks to God was the order of the day.

But what was that Plymouth thanksgiving like? Was it similar to the popular portrayal in grammar school ? Did the pilgrims wear broad hats and wide collars? Do we know what occurred? And what does it mean to a modern audience?

Our source is a letter by one Edward Winslow who was in attendance and subsequently recounted the events to a friend in England. His words remain the only eye witness account of the celebration.

In modern spelling, here are excerpts from Winslow’s letter.

Our harvest being gotten in, our governor sent four men on fowling,

Squanto, a member of the Patuxet tribe, introduced the pilgrims to maize. This variety of corn grew well in the rocky soil of the area. From Squanto,  the English learned how to cultivate the crops, and where to hunt and fish.  Over time, these separatists mastered the skills  of living in the wilderness.

But a successful harvest meant more than grain for food. It was also evidence that this democratic endeavour of the pilgrims would not die a premature death in the wilds of north-eastern America. This was more than simply surviving another day. For the first time, there was a small surplus. A celebration of praise and thanksgiving for their blessings was prepared.

Winslow goes on to say:

That we might after a special manner rejoice together,

There was joy in Plymouth after the hardships of hunger, disease and loss. As Winslow suggests, they embraced this good fortune with enthusiasm. They did not bemoan their losses. Rather, the people grasped their present happiness and sought to share their joy with others. They had visitors. And their guests brought abundant provisions to add to the feast.

… many of the Indians coming amongst us, and amongst the rest their greatest King Massasoit, with some ninety men, whom for three days we entertained and feasted, and they went out and killed five Deer, which they brought to the Plantation and bestowed on our Governor, and upon the Captain and others.

The Wampanoag stayed for three days. They added more than venison. The Native Americans shared their knowledge, time, and generosity .

It is true that a tragic history awaited these people. The conflict was long, brutal, and heartbreaking. Yet, as Winslow’s record indicates, in 1621 the two cultures worked in  harmony and peace. In that respect, their actions serve as an enduring example of good will.

And although it be not always so plentiful, as it was at this time with us, yet by the goodness of God, we are so far from want, that we often wish you partakers of our plenty.

This account should come as no surprise. When the pilgrims sailed on that small ship across three thousand miles of ocean, they placed their trust in God. Their voyage, and that severe experience in the wilderness, was evidence of their mission. This was more than a change of address. These people were building a society which would ultimately become  a refuge for those unwilling to surrender religious freedom for the shackles of tyranny. It was their purpose to live according to that faith, regardless of the obstacles.

The journey had just begun toward democracy and  freedom of religion in America.  A long and dramatic history remained to be acted out. And for one brief moment in time, on a windswept piece of land close to the expanse of the ocean, these two peoples, so diverse in many ways, were able to pause, gather, and celebrate. The feast has been a model of unity and hope for our country. Our national Thanksgiving Day offers a time for prayer, gratitude, charity, and family.

It is in that spirit that my husband and I wish you and your family a most Happy and blessed Thanksgiving Day.

Claire Cullen is retired history teacher. She and her husband Tim have spent their lives in public education. They have been married 43 years and have three children and six grandchildren.