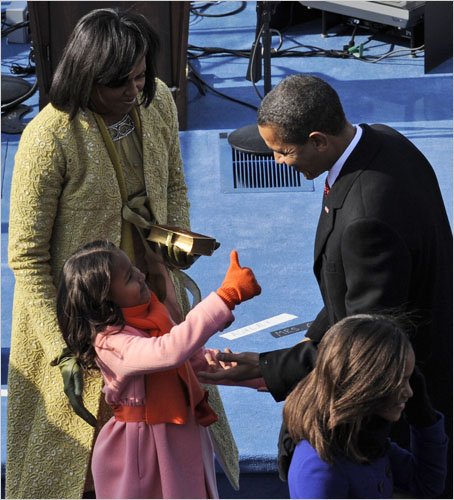 President Barack
Hussein Obama’s inaugural speech was awaited as eagerly as the
final episode in Star Wars.
Every pundit was speculating about its themes, its images, its
stories, its hints for future directions. Had there been more time,
no doubt websites and blogs would have sprouted up to discuss it.

The American passion
for memorable political speeches is so strong that it has become an
arcane art form, a genre of writing somewhere between a sermon and a
poem. Lincoln was its master and every president after him carries
the burden of trying to equal his rhetoric for a later generation. He
is expected to forge words and phrases which will echo down through the years. So
Mr Obama and his speechwriters found themselves going head to head with
Franklin Delano Roosevelt, John F. Kennedy and Ronald Reagan, whose
speeches were probably the best of the last century.

This was an enormous
challenge. This first inaugural speech was not only supposed to set
an agenda and inspire the American people. It was also supposed to
create new proverbs for the language. FDR did it with “the only
thing we have to fear is fear itself” and JFK did it with “Ask
not what your country can do for you — ask what you can do for your
country.”

Well, despite Mr
Obama’s well-deserved reputation for soaring and inspirational
speeches, his first inaugural speech fell short of the commanding
heights of his predecessors. It was delivered in his sonorous
baritone, beautifully modulated, and perfectly timed. But there was
no knock-out punch, no spine-tingling moment, no phrase to carve on
future monuments.

In fact, it was,
dare I say it, a bit cliched. The online magazine Slate even
marshalled its readers to
write a speech for him which
pressed many of the buttons as the new President pressed in his
address. Still, it achieved its purpose. It inspired listeners to
realise that they are participants in the great traditions of the
United States of America. That was no mean feat. For a few giddy
moments Obama's first inaugural raised them above the awful state of
the economy, the war on terror and America’s dilapidated reputation
abroad. Its soothing words were therapy for a wounded nation. As the
President said,

“To
match the magnitude of our tasks, we need the energies of our people
— enlisted not only in grand enterprises, but more importantly in
those small, splendid efforts that make headlines in the neighborhood
newspaper instead of the national journal. With these, we can build a
great cathedral of the spirit — each of us raising it one stone at
a time, as he reaches out to his neighbor, helping, caring, doing.”

Well, sorry,
actually Obama didn’t say that. Richard Milhous Nixon did, in 1969.
But it could have been Barack Hussein Obama. Both men were talking
about political discord and mighty challenges in Biblical cadences.
The words were different; the music was the same.

And in fact, like
Nixon's, the speech contained no proposals, no policies, no
solutions, just exhortations and affirmations. The economic situation
America faces today is much the same as the one it faced when FDR
took office in the depths of the Great Depression. But FDR was blunt
about what he intended to do. He inveighed against “unscrupulous
money changers” and actually threatened Congress with governing by
executive power if he failed to get his way. Obama was vague and
non-specific. His slogan “Yes We Can” is as enigmatic as ever.

So originality is
not what we heard today from Mr Obama. No matter. We heard something
far more interesting. We heard continuity.

First of all, it was
a continuity of rhetoric. The new president eschewed the
conversational diction which Ronald Reagan used in his first
inaugural. Instead, he fell back on the rhythms of hymns and the
parallelisms and simple imagery of Biblical poetry. This is the
natural language of American political oratory.

“Our
challenges may be new. The instruments with which we meet them may be
new. But those values upon which our success depends — hard work and
honesty, courage and fair play, tolerance and curiosity, loyalty and
patriotism – these things are old. These things are true. They have
been the quiet force of progress throughout our history. What is
demanded then is a return to these truths.”

Second, it tried to
establish, as most inaugural speeches do, a continuity of history.
“We the People have remained faithful to the ideals of our
forebears, and true to our founding documents.” Indeed, in addition
to echoing Lincoln, Mr Obama reached as far back as General George
Washington's address to freezing and disheartened troops during the
Revolution before their fortunes turned.

So it's all a bit
puzzling. Soothing words, obscure directions, historical continuity.
Is this the Change We Can Believe In, or is there something else in
the mail?

Michael Cook is
Editor of MercatorNet.