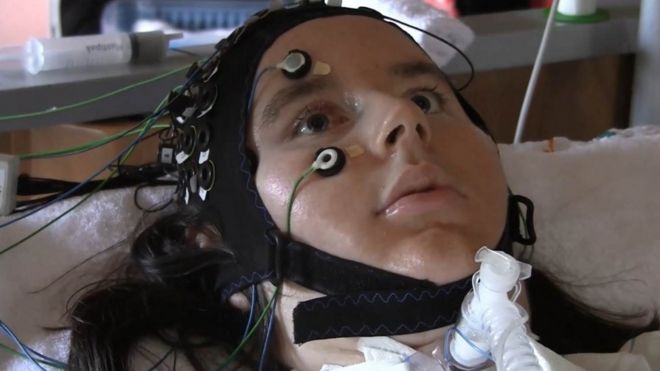 A totally locked-in patient who participated in the Swiss study

The craze for Marvel superheroes encourages us to think that just being human is too easy. We need to exceed the limitations of our frail bodies by adding superpowers – breathing underwater, eternal youth, colossal strength, regeneration, flying, spinning spider webs and so on.

Of course, that’s just comic book stuff, but the same dynamic is at work in the Olympic goal of going “Faster, Higher, Stronger”. It’s a facet of the homage we pay to “autonomy”, a key value of contemporary Western culture. If our autonomy is diminished, we are diminished as human beings. Our happiness is deemed to be proportionate to our autonomy.

But medicine offers a competing narrative – that less might sometimes be more.

Nothing illustrates this better than that rare condition, Locked-In Syndrome (LIS). Most people first learned of it after reading the international best-seller, The Diving Bell and the Butterfly, or watching the film of the same name. Jean-Dominique Bauby, the editor of the French edition of Elle, suffered a massive brain stem stroke while driving. When he woke up, he was completely paralyzed, apart from the upper eyelid of his left eye. But within two years he had written his book, which exudes a remarkable joie de vivre. He composed this by blinking when an assistant said a letter. Even in translation his prose was dazzling:

“[M]y mind takes flight like a butterfly. There is so much to do. You can wander off in space or in time, set out for Tierra del Fuego or for King Midas’s court. You can visit the woman you love, slide down beside her and stroke her still-sleeping face. You can build castles in Spain, steal the Golden Fleece, discover Atlantis, realize your childhood dreams and adult ambitions.”

Bauby’s condition, terrible as it may seem, is not the worst way of experiencing LIS. He seems to have had “classic LIS” and retained some eye movement. Other patients retain some voluntary movement. But then there is “total LIS” in which the patient is immobile, fully conscious and unable to communicate.

Until now. A paper published last week in PLOS Biology by a Swiss research group describes a computer interface that can decipher the thoughts of LIS patients. Four with total LIS were able to respond “yes” or “no” merely by thinking the answers. A non-invasive brain-computer interface detected their responses by measuring changes in blood oxygen levels in the brain.

The results have overturned previous theories that people with complete LIS lack the goal-directed thinking necessary to use a brain-computer interface and are, therefore, incapable of communication. It could even mark the abolition of complete LIS as we now know it

Here is the interesting part.

Contrary to expectations, the question “Are you happy?” resulted in a consistent “yes” response from the four patients. It was repeated over weeks of questioning, so it was no fluke. The lead author, Niels Birbaumer, added:

“We were initially surprised at the positive responses when we questioned the four completely locked-in patients about their quality of life. All four had accepted artificial ventilation in order to sustain their life, when breathing became impossible; thus, in a sense, they had already chosen to live. What we observed was that as long as they received satisfactory care at home, they found their quality of life acceptable.”

This study marks a big step forward in communicating with people with LIS, but it is not the first to report that such patients are satisfied with their lives. A 2003 study in the Journal of Head Trauma Rehabilitation of about 30 Americans with LIS found that about half had never considered euthanasia and half had considered it but rejected it. The authors commented, “Clinicians may not appreciate that quality of life often equates with social, rather than physical interaction, and that the will to live is strong.”

Clearly, it is possible for people to reach deep within and find happiness even with the most severe disability imaginable – if they are supported by family and friends. What is important is not to project our own fear of total disability onto the patient. As the authors of the American study wrote: “[We} call into question the assumption among some health care providers and policy makers that severe disability is intolerable. This prejudice is not inconsequential. Biased clinicians provide less aggressive medical treatment and/or influence family and friends (in ways not appropriate to the situation).”

In a sense, the experience of LIS patients raises important questions about autonomy? What if we don’t need autonomy to be happy? What if all we need is love?