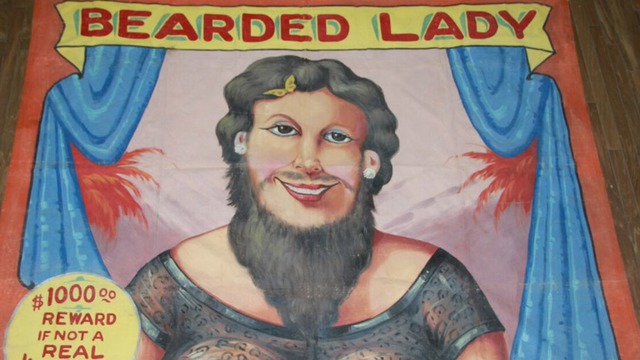 I’ve just discovered another class of persons whose courageous choices must be defended against bigotry: bearded breast-feeding ladies. No, this is not a side-show in Barnum & Bailey; it’s a major feature in this week’s Time magazine which is being praised as “amazing, poignant, incredibly compelling, extraordinary, beautiful and honest.”

Journalist Jessi Hempel describes the pregnancy of her transgender sister (who is living as a man). “My brother Evan was born female. He came out as transgender 16 years ago but never stopped wanting to have a baby.”

Currently Evan has a scruffy beard, a shaved head, and heavy, milk-filled breasts to suckle her son. The black-and-white photo of the two is going viral on Twitter, but not necessarily to support the #transgender cause. It looks far more grotesque than the lurid circus posters of the 19th Century.

Why is the essay poignant? Because it depicts Evan as a person who has finally fulfilled a dream, smashing through medical, administrative and social barriers.

Not only that – the birth is foreshadowing of “the New American Family”, according to Time. “Now that gay marriage is legal, the social battleground has shifted to new frontiers, frontiers that include the most private aspects of people’s lives,” Hempel writes.

“Pregnancies like Evan’s—and the many that are likely to follow—will stretch our cultural perceptions of gender norms even further. Americans are just starting to open up to the idea that you may be born into a female body, but believe that you are really a man. But what if you are born into a female body, know you are a man and still want to participate in the traditionally exclusive rite of womanhood? What kind of man are you then?”

A good question, to which the answer must be that neither “man” nor “woman” are going to mean anything in the New American Family.

Evan is not the first transman to bear a baby. In 2008 Thomas Beatie discussed his/her pregnancy with Oprah and posed as a bare-chested, bearded man with a very visible baby bump. After Massachusetts transman Andy Inkster was turned away from a fertility clinic in 2009 because he was “too masculine”, he sued for gender discrimination and won, eventually giving birth to a baby daughter. Hempel spoke to another “transdad” who gave birth at 20. “There’s more of it than we know that people aren’t tracking,” Dr Harvey Makadon, of  Harvard Medical School, told Hempel. “There’s a lot of people just doing it.”

Hempel tries to persuade readers that her sister’s decision is brave and beautiful:

“Evan will continue to chest-feed for a while. Eventually, he’ll begin taking testosterone again. His beard will fill out, and the fuzz will return to his knuckles. His chest will shrink to the point where his bind will be comfortable to wear again. To outsiders, his family will look like any other–a tossed-together group of kids and adults raising one another. At night, my brother will watch his son lift a tiny fist above his head as he sleeps and know what all parents know: this baby is a miracle.”

What’s not so beautiful is the future of the baby. Unlike most birth narratives with photos of nursing mothers, he is not the centre of the story. He is just his mother’s (soon to be father’s) precious toy. Growing up as the son of a woman who poses as a man, whose partner is a lesbian, will be very difficult.

There’s no point in criticising Evan. She is a troubled soul from a troubled family with three daughters, including Jessi. Evan is a transman whose partner is a woman and her two sisters are lesbians. Their parents divorced when their dad came out as gay.

Evan is probably staggering under a big load of psychological pain.

But what society cannot do is misplace its compassion. The victim of this story is not a misunderstood woman who thinks she is a man. It is the baby at her breast. His biological father is an anonymous sperm donor. His mother looks like a man; his mother’s partner is biologically unrelated. With that past, what will his future be?

And, by the way, the baby at the centre of this “poignant” story is never named. Why bother? The only one that matters is Evan.