Editor-in-chief of The Economist, Zanny Minton-Beddoes

The world’s most influential news magazine, The Economist, has a new editor-in-chief, Zanny Minton-Beddoes, its former business affairs editor. One of the very first issues on which she has chosen to campaign is the legalization of euthanasia. This week’s cover story is “The right to die: why assisted suicide should be legal”. It is illustrated by a snuffed candle with a smoking wick.

In a podcast Minton-Beddoes says that there are three reasons for her stand. First, asssisted dying is  one of the great moral questions of our time, especially in the light of ageing populations around the world. Second, it fits neatly into The Economist’s philosophy of promoting autonomy and reducing government meddling. And third, public opinion can truly make a difference.

So, this week’s leader (the editorial) contends that while life may be sacred and suffering may confer its own dignity, autonomy is the truest manifestation of human dignity:

The most determined people do not always choose wisely, no matter how well they are counselled. But it would be wrong to deny everyone the right to assisted death for this reason alone. Competent adults are allowed to make other momentous, irrevocable choices: to undergo a sex change or to have an abortion. People deserve the same control over their own death. Instead of dying in intensive care under bright lights and among strangers, people should be able to end their lives when they are ready, surrounded by those they love. 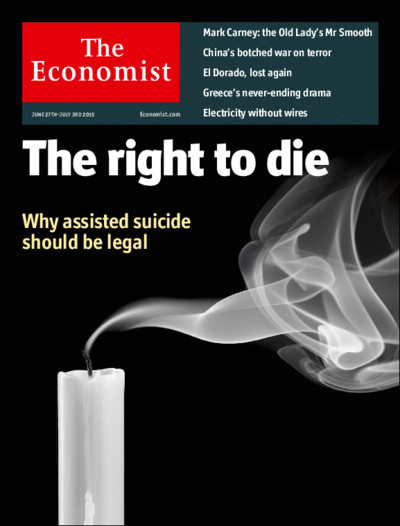 The headline on the cover is misleading. Minton-Beddoes and The Economist are not merely backing assisted suicide; they are urging readers to accept the boldest scheme on offer: Belgium’s euthanasia for almost anyone who asks for it. No chronic or terminal illness would be required. Mentally ill and depressed patients whould be eligible. Lonely people would be eligible. Children of any age would be eligible with the consent of their parents. In the words of Minto-Beddoes, this constitutes “the maximum respect for individual liberty”.

The Economist has editorialised in favour of assisted suicide for years. Despite a well-deserved reputation for pointed commentary based on deep background research, it has always had a blind spot when it comes to moral issues like drug use or abortion.

But it is still astonishing how readily it swallows paternalistic reassurances of doctors in Belgium about euthanasia. It glosses over the issue of “bracket creep” in eligibility for a lethal injection. It whizzes past the increasing number of non-voluntary deaths and the substantial proportion which are never reported to the authorities. In mentioning “terminal sedation”, it fails to point out that the patient dies of starvation and thirst. It brushes asides fears of disabled people that they will be pressured to die. By sprinkling the fairy dust of  “autonomy” over these problems, they magically disappear.

The fifth-wealthiest person in the world, former Oracle CEO Larry Ellison, once remarked, “I used to think. Now, I just read The Economist.” No doubt that was said tongue in cheek, but there is some truth in it. For opponents of euthanasia and assisted suicide, The Economist’s campaign sends an ominous message. As intellectual wet nurse to the global elite, it will help to set the agenda on end-of-life issues around the world.